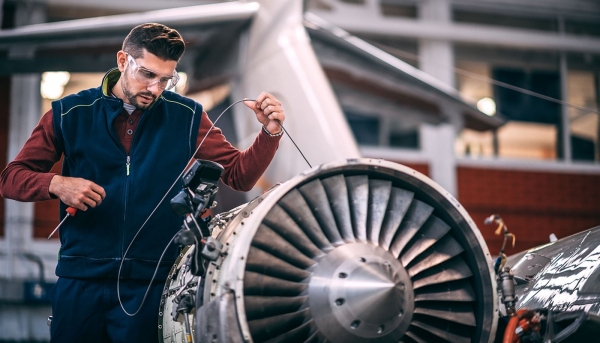 Lockheed and Boeing are reporting Tuesday and Wednesday

As if there weren’t enough drama already surrounding Boeing (BA), the company reports Q3 earnings Wednesday with investors waiting to hear more about why BA’s board ousted CEO Dennis Muilenburg from the chairman post earlier this month.

It was a move Muilenburg told the media he supported—and he remains CEO—but it does put  new emphasis on the seven-month grounding of the 737-MAX and how BA has handled the situation. There still isn’t a lot of clarity on when the aircraft will return to service, though BA has said it’s targeting Q4. That could be fluid and might depend on airline schedules and whether the Federal Aviation Administration (FAA) requires simulator training for pilots. Maybe we’ll hear more on the earnings call Wednesday.

Also consider looking for another update on how the situation has affected company coffers. The total cost so far is $8.3 billion and continues to rise, the Washington Post reported last week.

Another thing analysts will likely ask BA on the call is whether BA could end up stopping production of the planes. That’s something the company has hinted at, and if it happens, could ricochet through the industry as BA’s suppliers deal with the impact. BA is such a huge company that such a move could conceivably hurt overall demand for products like steel and aluminum, maybe pressuring the economy as a whole.

Amid the swirl of controversy over at BA, Lockheed Martin’s (LMT) stock has continued to fly higher as optimism around defense spending and new technology has shares up more than 17% over the last year, well ahead of the broader market. LMT reports Tuesday. (See more below).

Despite all the bad news for BA over the last 12 months, its shares managed a 3% gain over that time period, pretty much in line with the S&P 500 Index (SPX). But shares are down more than 15% from their March peak reached before the second 737-MAX crash led to the grounding of that fleet. See figure 1 below. 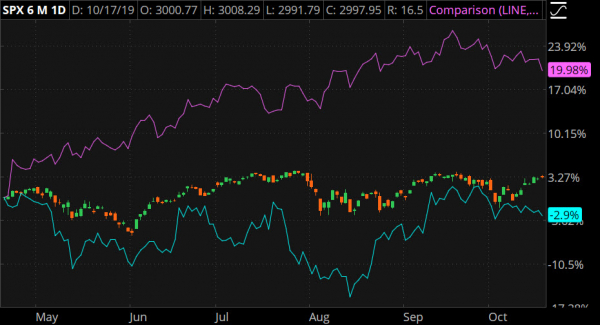 FIGURE 1: WINGSPAN. Shares of Lockheed Martin (LMT – purple line) have been on a tear in recent months, far outpacing the S&P 500 Index (SPX – candlestick). Meanwhile, Boeing (BA – blue line) has staged a bit of a comeback lately, but still have a ways to go to get back where they were before the 737 MAX troubles began.  Data source: S&P Dow Jones Indices. Chart source: The thinkorswim® platform from TD Ameritrade. For illustrative purposes only. Past performance does not guarantee future results.

It’s now early Q4, and this was when the company previously said it expected to get the 737-MAX back on the runway. That hasn’t happened yet, but we’re still not too far into Q4. Recent competing headlines suggest possible good news and bad news on the 737-MAX service front.

Starting with the good news, American Airlines (AAL) said earlier this month it believes software updates to the 737-MAX will allow the plane to be recertified later this year and resume commercial service in January. It’s good to hear that from one of BA’s customers, but it’s also important to keep in mind that previous optimistic forecasts haven’t come to fruition.

AAL said it expects to “slowly phase in” the 737-MAX early next year. Ominously for BA, however, AAL’s press release also included this bullet point for potential travelers, which probably is going to be something all the airlines have to deal with:

“Details regarding policies and procedures for customers who do not wish to fly on the MAX once the aircraft enters scheduled service Jan. 16 will be released in the coming weeks.”

In the past, planes that were grounded for safety after notable crashes, like the DC-10, faced some traveler trepidation as service resumed, but ultimately proved successful over the long run. It might be interesting to hear from BA on its earnings call how it plans to reassure airline customers and their passengers. BA executives have already said they’ll be aboard many of the early flights once the plane is back in service.

That leads us to some less hopeful news about MAX service, this time from Europe. Earlier this month, the European Union Aviation Safety Agency, which certifies aircraft on behalf of Britain’s Civil Aviation Authority, told the U.S. Federal Aviation Administration (FAA) that it has concerns with proposed software fixes to the aircraft’s flight control systems, the Times of London reported.

If European authorities don’t give a go-ahead and the FAA does, it raises questions about how airlines will handle overseas service using the plane. Don’t be surprised if BA executives get asked about this potential regulatory split on the earnings call Wednesday morning.

The delivery numbers for Q3 don’t look particularly strong compared with a year earlier, but that’s probably to be expected considering all the regulatory issues the company faces. In Q3, BA delivered 63 commercial aircraft, down from 190 in the same quarter a year earlier.

Year-to-date, BA has delivered 302 commercial aircraft, down from 568 in the same period a year ago. September deliveries totaled 26 planes, compared to 87 in September 2018, and 78 in September 2017.

In a positive development, Boeing Defense, Space & Security delivered 77 military aircraft in the third quarter of 2019, a 114% jump over the number of aircraft it delivered in the second quarter.

Looking back at Q2, BA suffered its biggest quarterly loss ever at $2.9 billion. BA lost $5.82 a share in Q2, with revenue falling sharply to $15.8 billion. The loss reflected a huge charge related to the 737-MAX issue.

Back then, Muilenburg said, “This is a defining moment for Boeing.” Arguably, however, every quarter is key now as BA tries to get its aircraft back into the sky, and, once there, to make sure travelers feel comfortable getting on the plane.

Looking beyond the 737-MAX, BA—like other industrial companies—faces the challenge of higher materials costs due in part to U.S. tariffs on steel and aluminum from China. These are important components of aircraft building. It could be interesting to get a sense from BA’s executives on the earnings call how business is going with China, a key customer, and whether recent progress in trade talks might help the company.

When BA releases results, it’s expected to report adjusted EPS of $2.08, down from $3.58 the prior-year quarter, on revenue of $19.57 billion, according to third-party consensus analyst estimates. That revenue would represent a 22.2% drop from a year ago.

The options market is implying about a 3.3%  stock move in either direction around the upcoming earnings release. Implied volatility was at the 31st percentile as of Friday morning.

Looking at the Oct. 25 weekly expiration, calls have been active at the 380 and 385 strikes, while put volume has been heaviest at the360 and 365 strikes.

Like BA, Lockheed Martin (LMT) has been dealing with tariffs and the associated costs. Now, with trade relations apparently improving, executives will likely be asked if that changes their outlook. At this point, it might be too early for many companies to really see where things are going on the tariff front, so lots of details might be too much to ask.

Last time out, details from LMT included better-than-expected earnings and a guidance increase for the second quarter in a row. After that solid showing , Credit Suisse analysts wrote, “The drivers of this consistent outperformance appear to remain the same—a focus on innovation, operational excellence, and strong relationships with customers at both DoD (U.S. Department of Defense) and internationally.”

One thing Credit Suisse thinks investors might want to be on the lookout for with LMT is any updates on its hypersonic weapons program. It said LMT is taking an early lead over competitors in this space, which it called “a substantial new development” for the industry. A hypersonic missile is any weapon that can travel at hypersonic speeds (above Mach 5) within the sensible atmosphere on a variable trajectory.

That’s a mouthful, but the thing to remember is that these missiles can travel closer to the ground than a conventional missile and have their trajectory changed along the way, giving them potential advantages over both Cruise and Ballistic missiles. It might be interesting to see if LMT has anything new to say about what Credit Suisse calls a “multi-billion dollar opportunity.”

LMT’s F-35 fighter jet, which makes up about 30% of the company’s sales, remains in the spotlight since the U.S. government banned delivery of the planes to Turkey back in July. This was in response to Turkey making a multi-billion dollar deal to buy a Russian missile system. New tensions between the U.S. and Turkey over Syria that surfaced recently could make the F-35 another topic on the earnings call. .

For now, LMT has sounded hopeful about its fighter jet despite the Turkey controversy. In positive F-35 developments, Poland recently announced plans to purchase nine more F-35s, and the U.S. State Department approved LMT’s plan to sell a fleet of the aircraft to The Netherlands.

A couple other factors to consider going into the call include whether the recent strong dollar is having an impact on foreign demand for LMT products. The dollar recently rose to more than two-year highs, presumably making U.S. products more expensive for overseas buyers. That can have a big effect on multinational firms like BA and LMT. Some reporting companies this quarter have already mentioned the strong dollar as a challenge.

There’s a sense that LMT and other defense companies could be getting helped by rising defense budgets, including in the U.S. Since the last time LMT reported, President Trump signed a two-year budget deal that increases military and domestic spending by $320 billion over two years compared to existing law, the Washington Post reported. The total defense budget for fiscal 2020 is $718 billion, vs. $703 billion in 2019.

Lockheed exceeded third-party earnings estimates in Q2, but it wasn’t as steep a beat as in Q1. At the time, LMT updated its forecast for 2019 financial results, with earnings anticipated between $20.85 a share and $21.15 a share. Expected full year revenue was also increased, to a range between $58.25 billion and $59.75 billion.

One thing to watch when LMT reports is whether any of that guidance changes.

LMT is expected to report adjusted EPS of $5.02, down from $5.14 in the prior-year quarter, according to third-party consensus analyst estimates. Revenue is projected at $14.87 billion, up 3.8% from a year ago.

The options market is implying about a 2.4% stock move in either direction around the coming earnings release. Implied volatility was at the23rd percentile as of Friday morning.