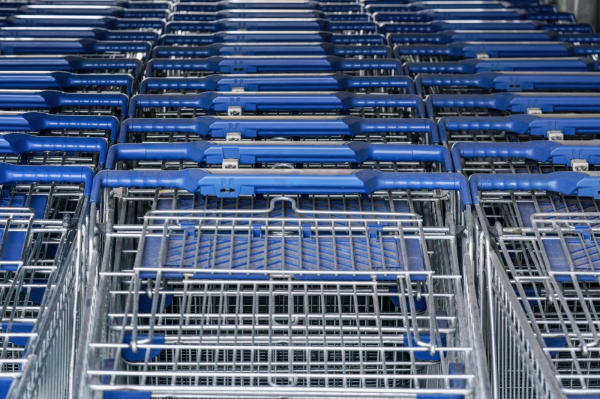 A Pandemic Winner, Walmart Might Be Seeing Cracks in Its Armor

As a provider of vaccines, Walmart could see in-store sales tick up

A TikTok deal may be dead for now, but Walmart’s love for the shared-video app is still alive

Walmart’s plate is full as it faces minimum wage hikes

Remember the old days, when Walmart’s (WMT) earnings were mostly about apparel and food sales and how the world’s largest retailer was juggling its tens of thousands of stores to help consumers “Save Money. Live Better.”?

When WMT opens its books on Feb. 18, it’s likely to include a lot of that—those sales are still the driving forces behind the Bentonville, Arkansas, behemoth’s triple-digit billion-dollar revenues every quarter.

But WMT has so much more on its plate that goes beyond how consumers once stood in long lines at the stores to have their baskets of goods rang up. The COVID-19 pandemic helped catapult WMT and its e-commerce site to top of mind for many consumers who might otherwise not have shopped there, and WMT has said it intends to keep those new customers coming and those faithful standbys loyal.

As it continues its battle against Amazon (AMZN) on books, apparel, home goods, and, increasingly, groceries, WMT has been unloading a number of new initiatives that are costing it money while adding perks and other efficiencies. Analysts will probably want to hear how all that is shaking out.

It’s also taxed WMT financially as well as operationally and we’ve seen the mega store make quick technological and logistical adjustments in an effort to smooth out the bumps, step up speed in everything from shelving to home delivery, and convert stores to better meet the omnichannel needs of consumers.

In the time of COVID, it’s gone beyond driving traffic to stores through curbside pickup and buy online, pickup in stores to offering vaccinations at its pharmacies. It might be too soon to tell how well that may or may not work out, but analysts might be expecting an early rundown of what WMT is seeing and whether those shots to the arms are also pumping sales at the checkouts. 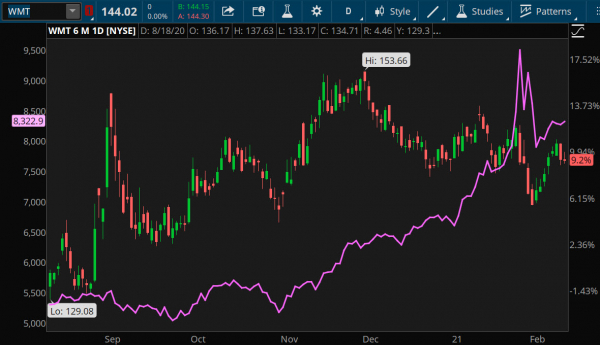 FIGURE 1: ROLLBACK. In the early days of the pandemic, Walmart (WMT—candlestick) was one of the go-to retailers that thrived while others shifted to lockdown and in some cases “survival” mode. Since then the rest of the S&P Retail Industry ($SPSIRE—purple line) have caught up—and even surpassed—WMT in terms of performance. Data sources: NYSE, S&P Dow Jones Indices. Chart source: The thinkorswim® platform from TD Ameritrade. For illustrative purposes only. Past performance does not guarantee future results.

WMT’s online sales in the last quarter were ablaze, shooting 79% higher on a year-over year basis, accounting for a greater share of the retailer’s $134.7 billion in revenue. But its in-store transactions slumped 14%. At the same time, average tickets were 24% higher, suggesting consumers were shopping less often but stocking up when they did.

These are potential signals that consumer spending habits may be changed for good—or for a long, long time—that even WMT Chief Executive Doug McMillon acknowledged on the quarterly conference call.

“There were behavioral changes from shoppers that drove our e-commerce business, and pick-up business,” McMillon said at the virtual Consumer Electronics Show in January.

“Many of those things won’t go back,” he added. “Pick-up and delivery are going to grow and be bigger.” It’ll be interesting to hear what other steps WMT has taken to keep up with this new trend and the performance of the first few months of Walmart+.

When WMT releases results ahead of the bell Thursday, Feb 18, it’s expected to report adjusted earnings of $1.50 per share—up from $1.38 in the prior-year quarter, according to third-party consensus analyst estimates. Revenue is projected at $148.1 billion, up 4.5% from a year ago.

The options market has priced in an expected share price move of 3.8% in either direction around the earnings release.

Looking at the Feb 19 options expiration, put activity has been scattered but higher at the 141 and 143 strikes. Calls have seen more activity, with the highest concentration at the 155 strike. Implied volatility was at the 23rd percentile as of Friday morning.

Is Too Much Now Too Much?

Some analysts fear these operational challenges of meeting shifting consumer demand with delivery, curbside pickup, and buy online, pickup in store, or BOPIS, while also presenting as compelling a shopping experience as possible in a Walmart store might have overloaded the system.

Let’s not forget, workers had to quickly adapt to closed stores and an onslaught of online business in Q1 and Q2 that required some folks to take on jobs they had never had before. And WMT had to rush to bring on thousands of workers and train them to handle that initial overflow nearly a year ago.

Not all analysts are down on WMT, but the question of when enough is enough might be a good one for the C-level.

A Shot in the Arm

WMT is joining a handful of others ranging from pharmacies to football stadiums opening their doors to vaccine-seeking consumers. While there might not be much to buy at a football stadium, there are plenty of grab-and-go items at WMT stores, which number more than 4,700 in the U.S.

Not all stores will be in the business of jabbing vials into consumer arms, but of those that are, analysts think some spillover spending could happen, tapping into the “since-I’m-out shopping” mode.

Between federally allocated vaccine doses and state supplies, WMT is poking arms in 33 states. Analysts said they want to know what WMT does with extras or leftovers taken out of refrigeration that need to be used when all the reservations have ended. It can be a tricky issue considering all the different mandates of who is eligible at what levels and who isn’t from state to state.

Let’s not forget that quirky social network of short videos that WMT still wants a piece of. For now, however, it’s willing to stay an enthusiastic outsider by continuing to promote products on it.

“If you’re watching a TikTok video and somebody’s got a piece of apparel or an item on it that you really like, what if you could just quickly purchase that item?” McMillon said on CNBC late last year when WMT emerged as a partner buyer with Oracle (ORCL) of the service. “That’s what we’re seeing happen in countries around the world. And it’s intriguing to us, and we would like to be part of it.”

You might recall all the ballyhoo about plans to ban TikTok while forcing a sale of video-sharing app to a U.S. based company. ORCL and WMT were two possible buyers, but that’s been put on hold for the moment.

It’ll be interesting to hear if WMT will touch on this when it opens its books.

There are a number of issues unrelated to store operations and vaccines WMT is managing that could be brought up during the conference call:

Robotics. WMT has had some mixed results in bringing technology into stores as a means of freeing up workers’ duties and augmenting efficiencies for consumers.Double duty for stores. WMT has expanded its test of using back-of-the-store for inventory stocking and online ordering and delivery fulfillment. Minimum wage. There’s talk about hiking the minimum wage from $7.25 per hour to $15. Given WMT employs around 1.5 million in the U.S. alone, it’ll be interesting to hear comments on this as it could be a significant cost increase.