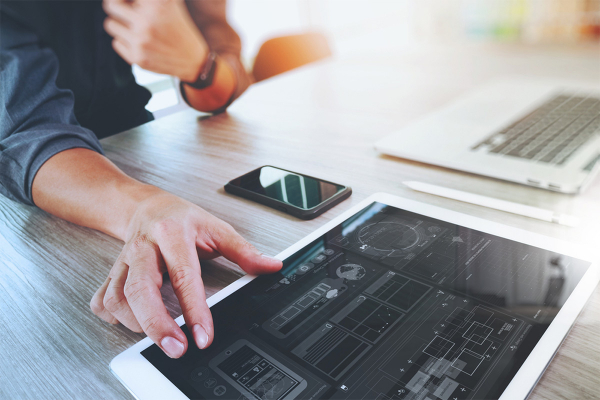 When Alphabet (GOOGL) opened its Q1 earnings book last April, the numbers weren’t all that stellar. It was an earnings miss. Later that day, during post-bell extended trading, its shares soared as much as 7%. Three months later, GOOGL had advanced roughly 21%.

So what happened? Maybe amid COVID-19 uncertainties, investors had been expecting worse, and consensus from Wall Street might have priced in all that uncertainty. Apparently, in the eyes of the market, not bad enough was “good enough” to propel the stock upward.

It’s time for a fresh snapshot from the Communication Services giant. Here’s what  we might expect when GOOGL opens its earnings book to reveal Q2 results after Thursday’s close.

GOOGL’s Q1 adjusted earnings came in at $9.87 per share, which was below consensus estimate of $10.86. The company posted $41.16 billion in revenue, beating analyst expectations of $40.64 billion.

The big story, if you remember, was about YouTube and the Cloud. As businesses began shutting down, the “stay at home” economy was just ramping up, GOOGL’s YouTube and Cloud services provided home-based access to the outside world; just what everyone needed for work and play when people were stuck in the confines of four walls and a roof.

As expected, usage surged during the “lockdown” across all Google products—search, classroom, YouTube, and Android apps, you name it. Maybe GOOGL CEO Sundar Pichai said it best when he told analysts during the Q1 conference call that search activity alone was “four times greater than during the peak of the Super Bowl.” Of course, who wasn’t Googling coronavirus-related stuff?

GOOGL’s cloud division posted $2.78 billion in revenue during Q1, up 52% year over year. Looking into the details, Alphabet’s Google Cloud Platform infrastructure outpaced all other units in the company’s cloud segment. Overall, the Q1 figure matched the one right before it (up 53% year over year in Q4), showing, if anything, some signs of steady growth.

Looking at other cloud-based services, Google Classroom doubled its usage starting in early March. They ended last quarter with 100 million students and teachers. As COVID concerns continue into the fall semester, it’ll be interesting to see what the Q2 figures reveal, as it’s unclear whether school districts, teachers, and students are ready to trade in the virtual classroom for a real one just yet.

Along with virtual learning (among other needs) came a demand for laptops. Chromebook sales saw a massive surge of 400% year over year in March. As far as virtual meetings are concerned, Google Meet may not be the “hippest” name in the culture of Zoom (ZM), but it did see an increase of up to 100 million users in Q1—another thing to maybe keep an eye on when the company reports Q2 results. Plus, the videoconferencing arena is heating up with another major titan—Microsoft (MSFT) and its Teams platform.

It’s safe to say that Q1 cloud growth was more or less expected, given the lockdown circumstances. The same could be said for YouTube. In fact, usage for that platform saw a massive Q1 increase. But its revenue growth tells a different story, one that didn’t go as smoothly as expected.

YouTube’s Q1 advertising got the spotlight—meaning it wasn’t viewed in the best light. YouTube usage surged as subscriptions steadily grew. But advertising revenue of $4.04 billion (up 33% from the same quarter a year earlier) was considered relatively weak. CFO Ruth Porat described it as “an abrupt decline.”

CEO Pichai elaborated, “The first two months of the quarter were strong,” but then “we experienced a significant and sudden slowdown in ad revenues” due to pandemic effects.

The big hit came from brand advertising, it appears. Other YouTube ads, particularly direct response ads, maintained their momentum. Ultimately, YouTube ad growth might have been kind of a downer compared with expectations from Wall Street, but still, 33% year over year growth doesn’t sound too shabby.

As businesses across the globe began to reopen in Q2, YouTube ad revenue may be something to watch as “overall recovery in ad spend will depend on a return to economic activity,” Pichai said. Will business reopenings in Q2 reflect enough confidence among bigger brands to restart their ad campaigns? Nobody knows for sure. But when they do, we can only imagine how that might potentially boost revenue for GOOGL if and when big brand ad spending ramps up.

Queuing Ahead to Q2

The Communication Services sector isn’t quite running with the leaders as far as chart performance, though it’s outpacing the broader market. As of Tuesday, Comms is up 5% year to date, with the S&P 500 Index (SPX) trailing behind, roughly flat on the year.

Against this backdrop, shares of GOOGL muscled ahead of their own sector (and the broader market as well), up 10% year to date (see chart below). 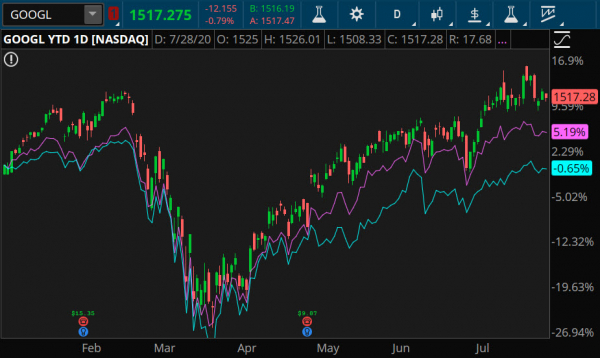 Heading into Q2, and similar to last quarter, Portat provided no clear guidance in terms of revenue or earnings, except that Q2 may be “a difficult one” for their advertising business.

As work and entertainment trends shift toward home-based services, both Pitchai and Porat seem to remain optimistic on long-term prospects. As Pitchai told analysts, “Ultimately, we’ll see a long-term acceleration of movement from businesses to digital services, including increased online work, education, medicine, shopping, and entertainment. These changes will be significant and lasting.”

One last thing: GOOGL’s plan to buy back $8.5 billion of its shares went ahead as planned, as Porat suggested it would. As you might guess, this can lend a sizable boost to EPS.

GOOGL is expected to report adjusted EPS of $8.23, down from $14.21 in the prior-year quarter, according to third-party consensus analyst estimates. Revenue is projected at $37.4 billion, down 4.1% from a year ago.

Options traders have priced in a 4.2% share price move in either direction around the coming earnings release, according to the Market Maker Move™ indicator on the thinkorswim® platform.

Looking at the July 31 options expiration, volume has been light overall, but puts have seen some activity at the 1400 and 1500 strikes. Calls have been active at the 1600 and 1800 strikes. The implied volatility sits at the 34th percentile as of Tuesday morning.