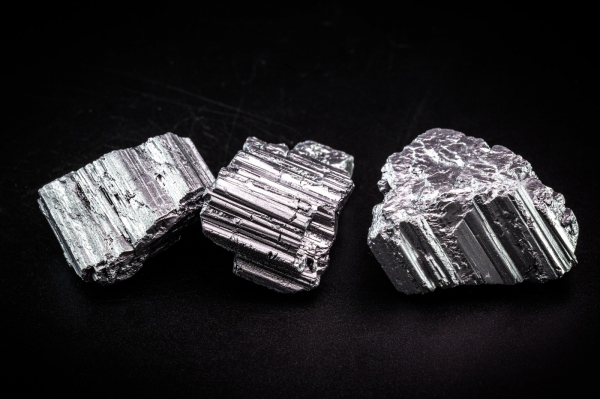 Rare earth elements and rare metals are among strategic materials needed by the U.S. Department of Defense

The ubiquitous smartphone is smack in the middle of international supply chain issues that bear on national security.

Rare earth elements are found in smartphone screens, circuitry, speakers, and vibration motors. And semiconductor chips are the brains of the operation. But it’s not just our mobile connectivity that’s at stake.

China controls most of the global production of rare earth elements, and semiconductor production—which is currently in short supply—is dominated by Asia.

This semiconductor shortage leaves the White House and other policymakers worried about the United States’ reliance on other countries for these materials.

Efforts to build up the United States’ capacity for rare earth metals and semiconductor chips are already underway, but making the country more self-sufficient in these areas won’t be an overnight process.

For Curtis Moore and his colleagues at Energy Fuels (UUUU), a producer of uranium and vanadium that’s also working on an ex-China rare earth supply chain, news of the presidential call for review was welcome. “We’re very encouraged by that,” commented Moore, the vice president of marketing and corporate development for UUUU. “There’s a growing unease of just being dependent on China for rare earths. It’s a nonpartisan issue.”

Indeed, in April, two Republicans and two Democrats sponsored legislation in the House of Representatives that would support the development of domestic supply chains for rare earth elements. Late last month, the Energy Department—with support from within both parties—awarded $19 million for 13 projects to support production of rare earth elements, which are also key in clean energy applications such as wind turbines and electric vehicles.

Although it’s pretty easy for politicians to get behind the idea of buying locally when it comes to nationally sensitive items, there is also the global economic reality to consider. Re-shoring won’t come cheap because it’s essentially the reversal of a globalization trend that’s been decades in the making.

Over time, globalization has opened the world economy to interconnectedness like never before, helping create efficiencies and lower the cost of finished goods. Developments in transportation logistics and technology have added to that web, creating a global playing field that can favor some nations over others—such as manufacturing exporters versus those that don’t have the capacity. For certain types of industries, globalization can also favor nations with lower labor costs and less strict environmental standards.

Though there are downsides to globalization, economist David Ricardo’s 19th-century theory of comparative advantage proved that international trade can benefit all nations involved, even if one of them holds an advantage in the production of all goods.

But that’s not likely to soothe political nerves when national security comes into play.

Certain natural resources have been deemed so critical to national security that the United States has developed a National Defense Stockpile, which includes rare earth metals and has its roots in the 1939 Strategic and Critical Materials Stock Piling Act. During the Korean War, the president authorized the release of millions of dollars in aluminum and copper from the stockpile, according to the book Managing Materials for a Twenty-first Century Military. In 1969, the president released nickel for use in defense production amid strikes against the two major world producers of primary nickel.

Tailored content recommendations from The Ticker Tape® are waiting for you in the Education Center. Plus, get additional TD Ameritrade exclusive resources like videos, webcasts, and more.

The United States already has a decent number of rare earth deposits that could be mined, but processing, which is dominated by China, remains a key constraint.

Lynas Rare Earths (LYSCF), the largest rare earth producer outside of China, has inked a deal with privately held Blue Line Corp. for rare earth processing operations in Texas. NioCorp Developments (NIOBF) is developing a mine in Nebraska that aims to produce a rare earth element as a byproduct. Rare Element Resources (REEMF) is developing a rare earth mine in Wyoming. Texas Mineral Resources Corp. (TMRC) and privately held USA Rare Earth are working on projects in Texas and Colorado. And Ucore Rare Metals (UURAF) has been developing a mine in Alaska and working on processing equipment.

The company with the biggest foothold in U.S. rare earths production is MP Materials Corp. (MP), which operates the Mountain Pass mine in California—once the globe’s leading source of rare earth elements before the United States outsourced its production to China, with its less-stringent environmental standards. The company is currently in mining operations and expects to begin delivering separated rare earth oxides next year, but it won’t start the phase of its business plan that will eventually allow it to process rare earth oxides into alloys and magnets until 2025.

On the semiconductor side of things, chip makers Intel (INTC) and Taiwan Semiconductor Manufacturing Co. (TSM) are planning facilities in Arizona, but they won’t be up and running until 2024.

Earlier this year, GlobalFoundries announced an expanded partnership with the Defense Department to provide chips from its plant in Malta, New York. The company already supplies the Pentagon with semiconductor chips from facilities in East Fishkill, New York, and Burlington, Vermont.

But building chips in the United States is the exception rather than the rule. According to the Semiconductor Industry Association (SIA), “While the U.S. remains the global leader in semiconductor design and R&D, the lion’s share of chip manufacturing is now occurring in Asia.”

A report last year from the SIA and Boston Consulting Group said that U.S.-located chip plants account for only 12% of the world’s semiconductor manufacturing, down from 37% in 1990. Meanwhile, 75% of the globe’s chips are made in East Asia.

Semiconductors are extremely difficult to manufacture, according to Gokhman. At the moment, the United States doesn’t have the infrastructure or trained workforce in place to allow companies such as Apple (AAPL) to source all its chips domestically.

It’s a similar situation with rare earths, Gokhman pointed out, noting that it’s not as simple as mining the rare earth metals. A fully fledged supply chain would also include infrastructure for refining and making finished products such as magnets.

Gokhman said it will take domestic public-private partnerships to help create the right incentive structure and workforce education to bring more semiconductor and rare earth production to the United States and overcome the semiconductor shortage.

“It’s not as simple as saying we want to re-shore these business lines,” Gokhman stated.