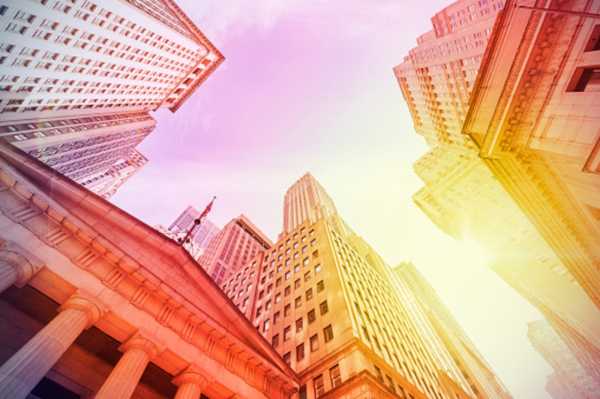 Come on in, the Water’s Fine: DJIA Could Join Rival Indices at Record High Party

S&P 500 gets another boost early on China trade optimism

Retail earnings season is just around the corner

(Monday Market Open) Last week could be a tough act to follow. How do you deliver an encore for a stretch of five days when the Fed lowered rates, Apple (AAPL) and Facebook (FB) delivered powerful earnings, and the jobs report showed that consumers continue to be incredibly healthy?

All that good news helped send the S&P 500 Index (SPX) and Nasdaq (COMP) to record highs Friday. And it looks like the Dow Jones Industrial Average ($DJI) might get a chance to join the record party today, judging from pre-market trading. Ten-year Treasury yields ticked up a couple of basis points early Monday, another possible sign of market optimism.

The challenge this week might be finding new catalysts to build on this strength. A possible one emerged early Monday when Bloomberg reported  that U.S. Commerce Secretary Wilbur Ross said licenses for U.S. companies to sell components to China’s Huawei will come “very shortly.” Ross also said the U.S. might not have to slap tariffs on European cars, perhaps a sign of a thaw in that trade relationship. Stocks rose in pre-market trading as investors begin the week hoping that positive news on the trade front might keep the rally humming along.

Earnings season continues to roll on, with retail companies starting to show up in a bigger way starting later this week. Before that, the season gets a jump-start this afternoon when Uber (UBER) is scheduled to report. That’s a stock followed closely by many retail traders.

There was some less sunny news on the corporate side this morning as shares of  Under Armour (UAA) sputtered after the company confirmed that the Department of Justice and Securities and Exchange Commissions are looking into its accounting practices. McDonald’s (MCD) shares also got the cold shoulder early on from investors after the weekend announcement of its CEO stepping down.

From a technical angle, some analysts think the SPX’s close above 3050 on Friday might have been significant, perhaps drawing more buyers in or causing other traders to cover their short positions. It also might be worth noting that the small-cap Russell 2000 Index (RUT) outpaced the other major indices Friday with gains of better than 1.5%. The RUT went on a really nice run in October but still trails the SPX for the year to date. Some veteran market watchers see the RUT as a good barometer of overall market health.

Another potential barometer is where investors decide to put their money. Over the last week, they’ve chosen so-called “cyclicals” over “defensive” sectors. Technology and Communication Services are two of the best-performing sectors so far in 2019, and they added to their leadership last week. Financials also look a little firmer lately, even though the sector slightly trails the SPX year-to-date. Technology might get another boost today from the China news, with chip companies in particular worth watching.

Meanwhile, sector laggards last week included ones like Utilities, Staples, and Real Estate, where people tend to park their money when they’re worried about the economy and hope for less volatility. Some of those, especially Real Estate, have had incredible years so far, but might be losing a bit of luster as bullish feelings seem to take hold going into the final months of 2019. We’ll have to watch whether this pattern continues.

For another economic barometer (there’s that word again), think back to Friday’s jobs report and consider all the financial jobs the government said got created last month. Is this a possible signal of up-front positions being created to handle demand for new mortgages, home closings and other real estate activity? If so, it could be a solid statement for what’s going on in housing.

After the truckload of data, earnings and Fed that blasted full-steam into the market last week, the next few days finally get a little less crowded. Earnings continue to roll in, but the majority are now behind us.

Despite all the headlines about earnings being better than analysts had expected, keep in mind that the bar was set a little low. Back when earnings season began, the average analyst projection was for a year-over-year earnings per share decline of about 4% for S&P 500 companies. As of late last week, that had improved to an estimated 2.3% average loss, according to S&P Global Market Intelligence. But a loss is still a loss. Some improvement could show up in Q4, the research firm said. It expects 0.4% earnings growth for the current quarter and 9% growth next year after just 0.6% earnings growth for all of 2019.

On a cautionary note related to the earnings skid, the S&P 500’s price-to-earnings ratio has been on the rise and now stands near 18 times projected earnings over the next 12 months. That’s way above the 14 level where we started the year, and it exceeds the long-term average of around 16. Remember, it’s harder to grow the “P” side of that equation when the “E” side is on the decline.

So far this year, most investors haven’t seemed to really focus on that—judging by how we keep seeing new highs in the major indices. The market is often good at predicting the future, so maybe investors see rosy times in 2020 as there’s no sign of consumers slowing down

Back on the very first day of earnings season, investors heard Jamie Dimon, CEO of JP Morgan Chase (JPM), say consumers were healthy. Nothing so far in companies’ Q3 results appear to have people backing off that belief.

The next chance to test Dimon’s thesis is later this month when key retailers like Walmart (WMT), Target (TGT), Macy’s (M), and Home Depot (HD) open their books. The chip sector—another one that helps analysts track consumer activity—also isn’t over, with Nvidia (NVDA) still on tap after a big day for chip stocks Friday. However, retail and NVDA come deeper in November. Most of the companies reporting this week are small- to mid-sized ones, so it might be worth monitoring whether the RUT can continue to keep up its recent pace.

While we’ve talked a lot about earnings, crude hasn’t come up for discussion here in a while. Maybe that’s because there just isn’t much to say. The U.S. price keeps circling around $55 a barrel like a moth around a flame, and it just isn’t having a huge impact on the stock market or on the economy in general.

You could argue this is a good place for crude to be, because the price seems high enough to encourage output from U.S. producers but not high enough to hurt the transport sector. Anything below $50 or above $60 might be a different story. 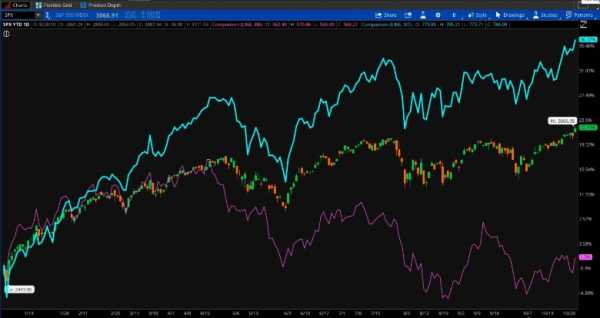 CHART OF THE DAY: POLE POSITION. With less than two months left in the year, this year-to-date chart shows that the Technology sector (IXT-blue line) enjoys a big lead over the S&P 500 Index (SPX-candlestick), while the Energy sector (IXE-purple line) continues to run on fumes. Data Source: S&P Dow Jones Indices.Chart source: The thinkorswim® platform from TD Ameritrade. For illustrative purposes only. Past performance does not guarantee future results.

Not to Spoil the Party, But … Solid October jobs data helped drive major indices to new record highs Friday, but that doesn’t mean investors can necessarily go on autopilot about the economy. That’s in part because the manufacturing sector still seems to be dragging, as seen with Friday’s ISM Manufacturing report. For the third month in a row, October’s data showed contraction. Analysts put a positive spin on the headline number of 48.3% (anything under 50 signals a contraction), in part because some of the underlying data improved a bit from September, particularly new orders. That doesn’t mask the fact that most categories remain under 50%, and the index is down from close to 60% a year ago. Chicago PMI for October also looked pretty soft.

A lot of this could be trade-related, and some might reflect the strike at General Motors (GM) that just ended. It’s tempting to write off ISM as a minor glitch on a day when other data (jobs) were strong and earnings have been better than expected. That said, it’s never a good idea to get complacent. Factory orders for September this morning and wholesale inventories later this week might both be ones to watch for more insight into the manufacturing economy. Factory orders fell in August, another sign of weak business demand. In one potential indication of market caution around the data, the 10-year U.S. Treasury yield finished last week at 1.7%, well below the 1.85% level it touched a few days earlier. The jobs report didn’t appear to give it much of a lift.

Consumer Demand Confirmed: If there’s a key takeaway from the jobs report, it might be that consumer demand continues to support U.S. economic growth, even amid weakness in manufacturing and skittishness about trade. The consumer is out there spending away, and as long as jobs growth looks this strong, there’s maybe less to worry about for investors. Hourly pay being up 3% is also right in the sweet spot. It gives people a bit more money in their wallets even as inflation is barely registering, but it doesn’t necessarily point to an economy that’s about to overheat and need the Fed to come in with ladders and hoses. Manufacturing jobs fell in October, but a lot of analysts attributed that to the situation at GM. We’ll see next month if the settlement of that strike led to any manufacturing sector gains.

Remember to Tip: The leading job growth category in October was leisure and hospitality, and if you’re someone who tends to look at the glass as half empty, you might say yes, employers are hiring, but for low-wage positions. That’s true to some extent, and there’s nothing wrong with these jobs (we’ve all had them). They just don’t tend to be ones where people often build careers.

Another argument, however, is that the glass is half full. First, if people are getting hired as waiters, bouncers, hotel workers, and bartenders, it could imply growing consumer demand for meals out, visits to the corner tap, and vacations—often the sign of a solid economy. Second is something Fed Chair Jerome Powell alludes to a lot. He’s said he wants the recovery to benefit not just the top tier of the economy, but also those who’ve been left behind. If long-term unemployed people are getting work, even if it’s in low-wage professions, that’s still an improvement for them and their families. And people who have steady paychecks tend to spend more money, which allows them to contribute to the consumer economy.