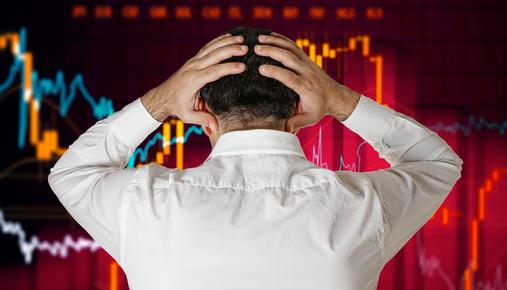 Identifying trend, support and resistance levels, and price patterns leaves a lot up to the discretion of the trader. Some traders prefer less-discretionary trading methods. This is because emotions can cloud a trader’s judgement. Using indicators and oscillators is one way to reduce the degree of discretion required in technical analysis. Indicators like moving averages help determine the trend and provide potential entry signals. Oscillators help identify changes in momentum and sentiment. There are many, many indicators and oscillators—in this article, we’ll only discuss a few.

Because determining the trend isn’t always so obvious, technicians often try to confirm the trend with technical indicators like a simple moving average. A simple moving average (SMA) is a formula that smooths day-to-day fluctuations of a stock’s price. Basically, it takes a certain number of days and calculates the average close prices. Then it displays that average as a line that follows the price. Each day the average drops the first day in the series and adds the most recent day so that the number of days averaged stays the same. 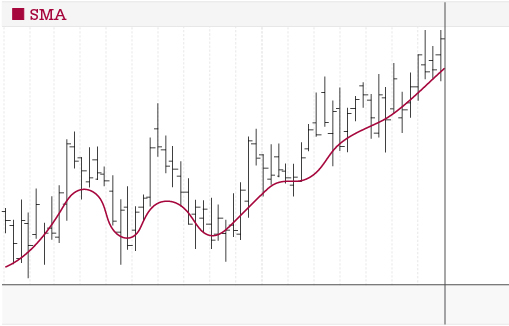 An upward line is an uptrend. Image courtesy of the Investools® Technical Analysis course.

An SMA can be useful in three ways. First, the direction of the line often confirms the trend of the stock. It’s sometimes easier to observe the direction of the stock’s SMA than the price trend itself. In the illustrated example, you can see how the moving average moves with the stock price, but has fewer day-to-day fluctuations. Some analysts say this confirms and clarifies the trend.

As with support and resistance, you can trade breaks and bounces using an SMA. You should select an SMA with a length that matches the time frame you wish to trade. Let’s look at both breaks and bounces. We’ll start with bullish trades, and keep in mind, an uptrend is a prerequisite for these trades.

To trade a bullish break, a sample entry rule could be: “Enter when price breaks above a bullish moving average.” 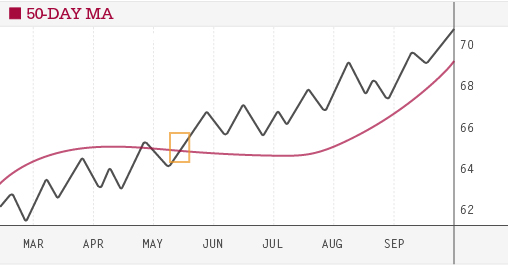 FIGURE 2: A BULLISH SIGNAL OCCURS WHEN PRICE CROSSES ABOVE THE MOVING AVERAGE.

Use moving averages the same way you use support and resistance lines. Image courtesy of the Investools® Technical Analysis course.

Oscillators are another way to identify entries and exits—they’re a type of indicator that attempts to measure price momentum or investor sentiment related to a stock’s price.

Price momentum is the rate at which price is climbing or falling. It often precedes price, which is to say that price often climbs at a slower pace before it begins to retrace. It’s like a speedometer in a car. Even though the car is still moving forward, you can see the speed is falling and the car will eventually come to a stop.

Investor sentiment is the current view or attitude toward a stock. It helps determine if investors are bullish or bearish, depending on the stock’s buying patterns.

Technicians look for shifts in price momentum and investor sentiment to help indicate when to enter and exit trades. Knowing if an oscillator measures momentum or sentiment may not be as important as knowing how to read an oscillator. Momentum oscillators are commonly calculated by monitoring the rate of price changes. Sentiment oscillators often focus on highs and lows per day in their calculations. However, for many investors, it isn’t important how they’re calculated either—they just focus on reading the signals. There are a few different types of signals; we’ll look at the zero line and reversal zone oscillators. Let’s start with zero line oscillators first.

FIGURE 2: THE MACD HISTOGRAM HELPS DETERMINES ENTRIES AND EXITS WHEN IT CROSSES THE ZERO LINE

The Commodity Channel Index (CCI) and Rate of Change (ROC) oscillators are other common zero line oscillators. While each oscillator looks slightly different, they all tend to give signals about the same time. This is important to note because there are hundreds of oscillators. The majority of oscillators will give similar signals, so choosing one will come down to personal preference. This is true for each type we’ll look at.

FIGURE 3: THE CCI AND THE ROC ARE EXAMPLES OF ZERO LINE INDICATORS.

The zero line defines the change in momentum. Image courtesy of the Investools® Technical Analysis course.

For investors using a zero line oscillator for bullish trades, a possible entry rule could be something like: “Enter when the ROC crosses above the zero line.”

The signal doesn’t occur until the line crosses out of the reversal zone. Image courtesy of the Investools® Technical Analysis course.

The next common group of oscillators is reversal zones. Reversals zones identify areas where a stock is overbought or oversold. However, a signal isn’t triggered until the oscillator’s line crosses out of the zone. The stochastic indicator tracks trader sentiment by examining where the stock closes relative to where it traded during the day. It has reversal zones at 25 and 75. When using the stochastic, you may choose to enter a long position when the stochastic line moves above 25 and exit when the line moves below 75.

Here are examples of the RSI and CCI compared to the stochastic indicator. Observe the reversal zones for each indicator. (Notice that the CCI has both zero line and reversal zone signals). 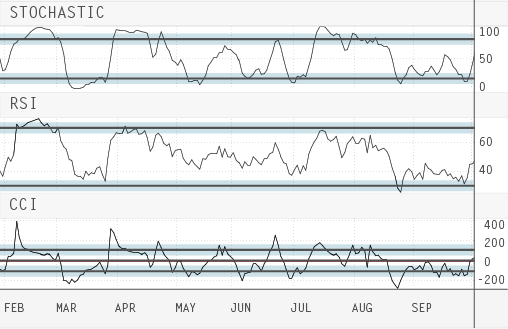 FIGURE 5: THE STOCHASTIC, RSI, AND CCI ARE EXAMPLES OF REVERSAL ZONE OSCILLATORS.

The CCI has a zero line and reversal zone signals. Image courtesy of the Investools® Technical Analysis course.

As you can see, there are many different ways you can trade using indicators and oscillators. They can be very straight forward, but also versatile. However, oscillators are often best used in context of trend, support and resistance, and trending indicators. Oscillators by themselves tend to be poor performers. It’s common to combine a trending indicator with an oscillator. Experiment with a few of these to create a system.