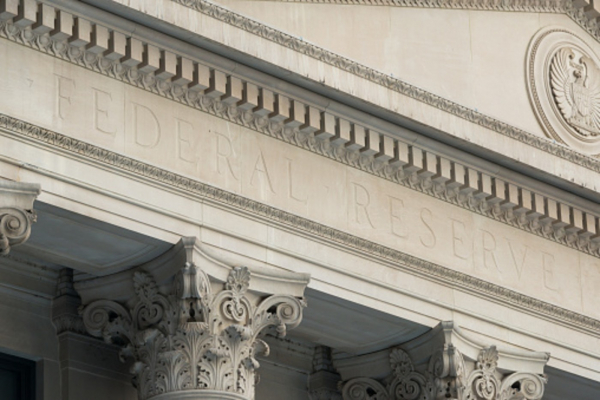 (Wednesday Market Open) Sometimes you can pretty much trust the numbers, but other times it’s not such an easy call.

Looking at the Fed funds futures market and judging from the numbers there, you might conclude that chances of a Fed rate cut today fell a lot from a few weeks ago. Futures recently predicted slightly less than a 60% chance of the Fed easing.

Closer up, however, it appears that the drop from around 90% just a week or two back might be caused by some rate contracts expiring and some new ones hitting the market. In other words, it looks like a temporary blip that might ultimately not mean much when it comes to rate cut probabilities.

That’s a long way of saying that chances for a rate cut today actually look to be pretty high, and maybe even extremely high. The numbers can be confusing; there’s no two ways about it. It’s just one of those times. It doesn’t look like the markets got thrown off too much, judging from how stocks didn’t really seem to react to that percentage drop yesterday and managed slight gains. Futures point toward a lower open today after a weak earnings report with trade implications from FedEx (FDX) (see more below), but with the Fed meeting later, volume could be thin with limited price moves.

The Fed announces its decision at 2 p.m. ET. If it lowers the fed funds rate by 25 basis points, as most analysts expect, it’s unlikely that alone would move markets too much. If that’s the case, watch instead for new “dot plot” where members chart expectations. That’s probably the best way to get a sense of just how likely any future rate cuts might be and when they might come. Just consider keeping in mind that many analysts don’t expect the median dot to move down much from where it was last time out, meaning the dot plot might be unlikely to show rising chances for more rate cuts this year.

Also, Fed Chairman Jerome Powell steps to the podium about half an hour after the decision, and his comments have been known to stir things up on Wall Street. Last time out, at the July meeting, he helped spark selling when he seemed to characterize the rate cut that month as a one-and-done type of deal. It wouldn’t be all that surprising to hear similar language this time from Powell, and for him to sound vague about future plans.

One big question is what comes next on rates. Investors have been rolling back futures market odds of a follow-up cut next month, but some analysts still expect one at some point this year. Maybe Powell and company can shed more light, but the way things are shaping up, it doesn’t appear we can expect too much.

But another question mark going into this afternoon’s press conference may be the Fed’s future plans for its balance sheet (see more below). Recall that the central bank recently wrapped up a balance sheet reduction program, and already there have been calls for a fresh round of expansion.

FedEx, Tariffs and the Consumer

It was a tough night for FDX Tuesday. The company—sometimes seen as a barometer for consumer health—missed third-party consensus on both top- and bottom-lines with its latest earnings. It’s also possible to see tariff situation repercussions in their statements as they lowered full-year guidance. Shares fell 10% in pre-market trading Wednesday.

In a nutshell, FDX said it expects global trade volumes to contract for the first time since 2009, and that  uncertainty over Brexit is impacting not only the U.K., but also its major trading partners. The company added that China’s export outlook remains weak.

This is just one earnings report, and you don’t necessarily want to read too much into it. But it’s unsettling. It’s still likely that a healthy consumer could carry us through the holidays. However caution could grow about the beginning of the new calendar year if tariffs remain in place.

As the Fed considers where the economy might be headed and what to do about it, a number popped up yesterday that’s worth a second look. August industrial production jumped 0.6% to easily surpass analysts’ estimates. With industrial activity falling in much of the world and recent purchasing managers data here in the U.S. a mixed bag, it’s good to see a number like this. That said, one data point isn’t a trend. It was, however, the biggest monthly rise in industrial production in a year.

The market didn’t seem to get much of a spark from the data, but more data today could be worth a look ahead of the Fed decision at 2 p.m. ET. We saw August housing starts and building permits come out this morning, and starts came in well above estimates, growing more than 12%. Permits also rose 12%, and both starts and permits hit 12-year highs. This is one month’s data, but it’s pretty glowing.

Volume was thin Tuesday ahead of the Fed meeting, but nine of 11 sectors managed a higher finish following Monday’s geopolitical-related selling. The defensive Real Estate and Utilities sectors led the way. On the other hand, chip makers also had a good day, and that sector isn’t far from recent highs. Any strength in semiconductor-land is likely a sign of investor confidence, since those chips go into so many consumer electronic products (see Fig. 1 below).

Some of the late strength in stocks on Tuesday might be related to growing calls for the Fed to go back to making asset purchases again and growing its balance sheet, according to Briefing.com. The Fed did this starting a decade ago to try and inject more liquidity into the economy. That program ended, but analysts have been saying for a while now that the Fed might resume large-scale buying of debt securities.

In another development related to the fixed-income market, the Wall Street Journal reported that the New York Fed moved Tuesday morning to put $53 billion of funds back into the banking system through transactions known as repurchase agreements (“repos”). This is something the New York Fed hasn’t done since 2008, and it happens when interest rates in the interbank markets go higher than the Fed wants.

Treasury yields fell on Tuesday, maybe in part because of the Fed’s move in the repo market and in anticipation of today’s potential rate cut. The 10-year yield, which rose above 1.9% last week, is now back to around 1.8%. That’s still up more than 30 basis points from earlier this month. 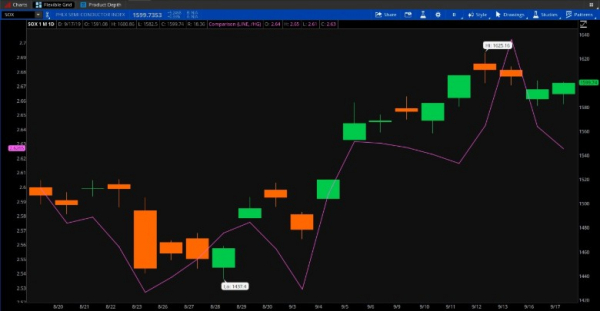 FIGURE 1:  COPPER CONUNDRUM: The one-month chart here shows how semiconductor stocks (SOX—candlestick) have gained strength over the last few weeks along with industrial commodity copper (/HG—purple line). However, copper—sometimes thought of as a barometer of demand for the type of electronic goods that use chips—is off pretty sharply over the last few sessions. Worries about the global economy seem to be affecting copper, used in many electronic gadgets, but not chips. Data Sources: Nasdaq, CME Group.  Chart source: The thinkorswim® platform from TD Ameritrade. For illustrative purposes only. Past performance does not guarantee future results.

A Message by Telegraph? As the Fed mulls another rate cut at this week’s meeting, the direct intention of the Federal Open Market Committee (FOMC) would seem pretty clear: Lower rates aim to stimulate lending in hopes of stoking economic activity. Econ 101 stuff. But does a quarter-point easing of the Fed funds rate really have a material effect on commercial activity? Perhaps the question that should be asked is, “What does a change in the Fed funds target say about its economic outlook?”

Remember: Two-thirds of the economy is tied to consumption, and by pretty much all accounts, the U.S. consumer is humming along at a not-too-hot-not-too-cold clip—as evidenced by recent data on consumer confidence, consumer sentiment, and retail sales. Combine this with record low unemployment and muted inflation, and you might expect to see a Fed that’s comfortable with the status quo—or maybe even one that’s leaning toward a rate hike. In that case, an aggressively dovish Fed might cause some to wonder whether the central bank sees darker skies on the horizon. In other words, over the longer term, those rooting for a rate cut might be cautioned to be careful what they wish for.

Fill’er Up! Later this morning, the weekly U.S. crude stockpiles report might get closer scrutiny than normal given the events of the weekend in Saudi Arabia. U.S. crude inventories fell nearly 7 million barrels in the last weekly report, and are about 2% below the five-year average. Saudi Arabian officials sound pretty optimistic about quickly getting production back online, and crude fell sharply on Tuesday to back under $60 a barrel for U.S. futures. Still, it would be reassuring to see signs of U.S. supplies being in position to bridge any gap left by the attacks. It’s almost amazing that we can even say that, given that 10 years ago the U.S. was a major importer and in no position to export, but times have definitely changed.

Dueling Analysts on Home Market:  If you want a sense of where things are in the market at this juncture, consider separate analyst notes released Tuesday on two big stocks often thought of as derivatives for the homebuilding and renovation market. One analyst downgraded Home Depot (HD), saying the investments the company has to make in its business are going to make it difficult for HD to continue delivering the type of returns they’ve had. Another analyst upgraded HD competitor Lowe’s (LOW) because they say LOW has improved the product on its shelves and the CEO is doing a good job.

That’s the market right there. Two notes about close competitors, but with vastly different takeaways. The fact is, there isn’t that much difference between HD and LOW customers, and in either case both companies would likely do well if demand for home renovation picks up. A year ago, people were putting companies like HD and LOW, along with home builders, out to pasture because of higher rates. Now homebuilding stocks like KB Home (KBH) and Toll Brothers (TOL) have had really strong moves, and it’s not just about lower rates. It’s more relevant to employment. When people have jobs, they’ll spend money on big-ticket items. Good employment hides a lot of other things.