Forex 4 Fun: How to Hedge Your Grocery Bill

According to the Bureau of Economic Analysis (BEA), consumer consumption accounts for 65 % or more of the U.S. Gross Domestic Product (GDP). This means that nearly two-thirds of our entire economy depends on consumers spending money. When Jane Public stops buying because loss of employment, lower wages, decline of confidence, or simply lower the purchasing power of the income received, GDP is negatively impacted. Today, consumer purchasing power is declining significantly. Bottom line: The same monthly income just doesn’t go as far today as it did a year ago, particularly when it comes to buying our groceries.

When agriculture prices climb higher, for example, consumers are feeling the pinch. When the dollar’s purchasing power diminishes, the relative commodity prices rise. And when prices rise in the exchanges, they also rise at the checkout stand. If the monthly grocery bill is high, the expendable income for the non-necessities (items we can live without) declines and negatively impacts the economy.

But have no fear, forex is here. There is a way to hedge some of the rising commodity prices and higher grocery bills within the currency markets.

The Canadian dollar, the Australian dollar, and the New Zealand dollar are all considered commodity currencies. These countries export commodities, and their economies rely on the sales. When commodity prices rise, their economies do well, and their currencies strengthen. Historically, when commodity prices rise, the U.S. dollar typically weakens. When this happens, you might consider selling the U.S. dollar to buy Australian dollars, Canadian dollars, or New Zealand dollars.

Since it’s the longer-term rise and fall of agricultural prices that ultimately impacts prices at the grocery store, look for confirmation on the weekly charts of an agricultural index, such as the Nasdaq OMX Global Agriculture Index (QAGR), which began to rise in July of 2010. Notice the correlation study comparing QAGR to the AUD/USD in Figure 1. The correlation has remained positive for nearly a year and has maintained a correlation of over 50 % for much of that time. 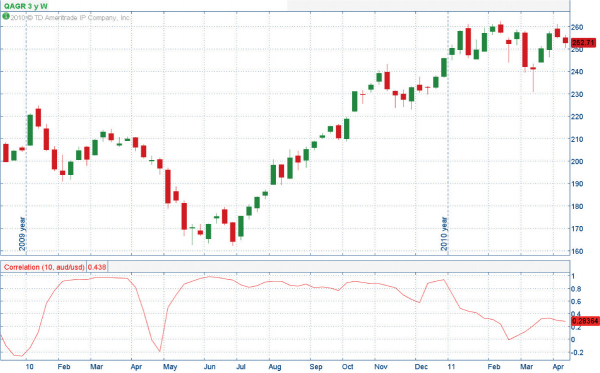 As the correlation indicator (lower study) indicates, from July 2010 to February 2011, as agricultural prices rose, so did Australia’s currency—a country rich in commodities. Source: thinkorswim® from TD Ameritrade. For illustrative purposes only.

How would this work in the real world? Suppose you spent on average $500 a month in groceries and saw your grocery bill increase incrementally the same 50% over eight months that the QAGR saw. You would have paid approximately $1,000 more than “usual.” Meanwhile, purchasing one mini contract of the AUD/USD on July 1 when QAGR was breaking through its highs would have generated over $1,500 in the same time frame. That hedge would have taken care of the increase in grocery prices—with $500 to spare.

Because the forex spot market continually rolls over, this type of hedge can be left on for multiple months if it is monitored carefully and proper money management is in place (read: set your stops).

Now, who said that you have to stop buying Twinkies?