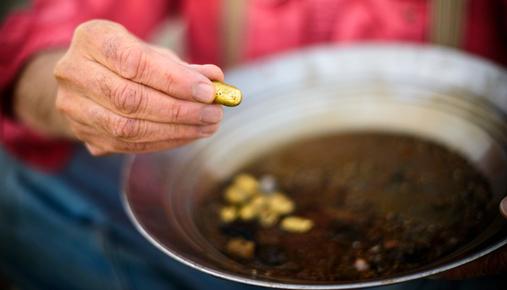 Is the Gold Rush On? Keep an Eye on Central Banks

When stock market volatility picked up in February 2018, so did the relationship that gold has to the benchmark S&P 500 Index.

That’s unusual by some standards. Gold is considered an alternative asset, and looking over time, the gold and S&P 500 correlation is typically low. When the stock market stumbles, some investors may turn to gold as what they feel is a potential safety play. Historically, when the S&P 500 has plunged by more than 4.4% in a week, the correlation between stocks and gold falls to -15%, according to the World Gold Council.

Take a look at figure 1, which charts gold versus the S&P 500 over 15 years to show their correlation. You’ll see how these two trade opposite of each other most of the time, but also have periods where they move in tandem.

This chart shows the relative performance of gold futures versus the S&P 500 Index (SPX) from 2003 to 2018. Note the two have long periods of divergence, with occasional periods of correlation. Data source: CME Group, S&P Dow Jones Indices. Chart source: the thinkorswim® platform from TD Ameritrade. For illustrative purposes only. Past performance does not guarantee future results.

Yet in the first quarter of 2018, this inverse relationship broke down a bit, says Shawn Cruz, manager of trading strategy at TD Ameritrade, and George Gero, managing director at RBC Wealth Management and a veteran gold trader. There were days when stocks and gold were both up or both down.

Cruz says such moves were especially noticeable when markets were down, with both gold and stocks lower. He says investors were likely moving into U.S. Treasury markets, looking for what they hoped was a safe haven relative to stocks and commodities, including gold.

Talk of inflation was also supporting gold—and stocks, for that matter, Cruz says. Gold and stocks can both be inflation hedges, meaning they may be likely to hold their value as the purchasing power of the underlying currency is diminished. So a weaker dollar can support them both, he says, as long as inflation isn’t seen as runaway.

Gero says gold also got a boost from some concerns about the potential for agricultural inflation because of poor weather in California, Texas, and Florida.

In addition to the inflation concerns, Rob Young, portfolio manager for the National Resource Fund at ICON Advisers, says at times gold may have benefited from increased volatility in the stock market. “Gold can sometimes be seen as a place to hide in volatile times,” Young says.

The traditional gold versus S&P 500 correlation may be returning as geopolitical concerns are ramping up with talks of trade wars, benefiting gold, Gero says.

When the Federal Reserve met in March 2018 and raised interest rates, gold rose. Normally gold falls when interest rates rise, but both Cruz and Gero said this interest rate hike was fully expected by the market, so the post-hike market reaction wasn’t quite the same as it might be after, say, a surprise rate change.

Cruz said what gave gold a little extra steam in March was the Fed’s projection of inflation at 2.1%. Rather than looking at inflation with the traditional cap of 2%, it was seen as median level.

“People looked at the inflation projection and said at 2.1%, that’s above your target. The inflation trade for gold was on, which is why we saw it rally,” Cruz said.

Gold mining stocks are viewed as among the most common ways to express a perspective on the gold market. But gold mining companies have many risk factors to consider, from company management to labor costs as well as equipment and land leases. All these factors, plus the price of gold, can affect the pricing of gold mining stocks.

“An improved equity market for explorers allowed many companies to launch or resume drill programs on their most promising projects … [with] the main focus on gold,” he says.

Ferguson says S&P Global Market Intelligence expects the global exploration budget for 2018 to increase by a further 15% to 20% year-over-year, led by the gold miners.

While gold mining stocks can give you indirect exposure to the gold market—miners’ profitability tends to be correlated with the price of gold—it’s not a perfect correlation. “When you buy a gold miner, one of the risks you’re subjected to is business risk. Gold prices could go up, but that miner could have a disaster in the mine, or a strike, and prices for the miner could go down instead,” Cruz says.

Another way to invest in gold is to buy physical gold, such as gold coins or bars from an online dealer, or from your local coin shop. It’s straightforward, but can also be inefficient, as commissions and markups can be high and, depending on where you live, you might be subject to taxes on your purchase.

Another option is to invest in a fund that holds physical gold. Such funds can offer a few potential benefits beyond holding physical gold. They can offer more liquidity and lower transaction costs via tighter bid/ask spreads when compared to buying and selling physical gold. However, gold funds can pose unique risks and this is why it’s very important to read a fund’s prospectus and understand the risks before investing.

And, finally, there are gold futures contracts, which allow qualified account holders to buy and sell contracts for future delivery of gold. With futures, you don’t put up the entire notional value, but rather you post an initial margin requirement, essentially a “good faith” deposit. In other words, you employ leverage, which can magnify your gains, but also your losses.

TD Ameritrade clients can learn more about futures contracts, including items like tick size and margin requirements, through the Futures Trader feature on the thinkorswim platform. See figure 2.

After logging on to the platform, find Futures Trader by clicking Trade > Futures Trader. You may choose your preferred layout, such as simple sell and buy buttons (left) or a chart layout (right). Data source: CME Group. Image source: the thinkorswim® platform from TD Ameritrade. For illustrative purposes only. Past performance does not guarantee future results.