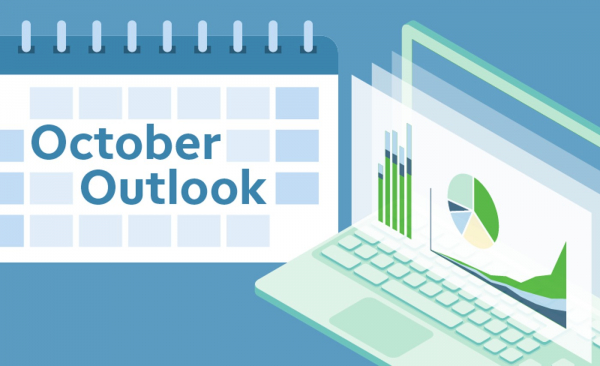 Washington, D.C. and China expected to be in focus amid geopolitical rumblings

Earnings season, first look at Q3 GDP among other highlights expected in October

For Fed watchers, Sept. 22 was a “eureka” moment that could help determine where Wall Street heads in October. That was the day Fed Chairman Jerome Powell helped light up the market by hinting that a “taper” could be closer than ever.

While the month ahead includes plenty of potentially market-moving events—including the start of earnings season, potential drama in Washington and China, and a first look at the government’s estimate for Q3 economic growth—the Fed remains the number one story.

Why this focus on the Fed and what sounds like the esoteric concept of the Fed potentially “tapering” its monetary stimulus? Because it’s arguably top of mind on Wall Street as we head into early October since it has to do with the cost of borrowing money. The Fed has at least started to talk a little bit more in timeframes, and any clarity we get from them as the month continues is probably going to be looked upon very favorably. Remember, uncertainty isn’t Wall Street’s friend. People tend to like clarity.

For the last year and a half, Fed Chairman Jerome Powell and company have been snapping up $120 billion in bonds each month. It’s a strategy designed to keep borrowing costs low for consumers and help companies stay afloat in these difficult pandemic times.

However, many investors have been waiting impatiently for the Fed to remove the economy’s training wheels and pull on some gloves to fight rising inflation. It could potentially do both by “tapering,” or trimming, the amount of bonds it buys each month.

A taper announcement “could come as soon as the next meeting” of the Fed in November, Powell said on Sept. 22, though he added that the timing will depend on the economy’s strong performance continuing in coming weeks. The key could end up being the September jobs report that is due for release by the U.S. Department of Labor on Oct. 8.

It would take a “reasonably good” jobs report to meet the test of progress toward a taper, Powell said. “The test is all but met,” he added, and he doesn’t need to see a “very good” jobs report, just a decent one. Other Fed officials, he added, believe the test for a taper has already been met.

September Jobs Report Front and Center at Start of Month

By specifically calling out the Oct. 8 jobs report, Powell put investors on notice that he and possibly others at the Fed are zeroing in on that data to help them decide their next steps on tapering. That’s very likely going to mean an intense focus on the report by just about anyone involved in the markets.

It also puts a lot of focus on a single word and how to interpret it once the report comes out. Powell wants to see a “decent” September jobs report to help determine the timing of the taper announcement, but what’s the definition of  “decent?”

Job growth has averaged 750,000 a month over the last three months, but came in below 300,000 in August. However, even 200,000 new jobs a month was considered the standard of excellence before the pandemic shut down and reopening.

What’s decent now might be in the eye of the beholder, but let’s imagine it would have to be at least in the ballpark of the 235,000 jobs created in September, and maybe higher than that. Only Powell really knows.

It’s a bit early to look for analyst estimates of September jobs growth, but they’re likely to start showing up during the first few days of October. We know that the Delta variant of Covid took a big bite out of August jobs growth, and Delta remained a major issue throughout September. But there were some green shoots in the August report that might help employment growth if they carried through into September.

The hospitality sector took a big jobs hit in August as restaurants, hotels, airlines, casinos, and other “reopening” businesses slowed hiring due in part to the Delta variant. At the same time, the transportation, warehousing, and manufacturing sectors saw pretty “decent” jobs growth, perhaps a sign of increased demand for products across the economy. If these trends continued in September, it could go part of the way toward getting jobs growth to levels the Fed wants to see.

Immediately after Powell spoke on Sept. 22, the best-performing sectors were Financials and Energy. That’s not too surprising, considering they’re known as “cyclical” sectors that tend to do better when the economy is growing. This trend could flow into early October, barring any major negative news, while so-called “defensive” sectors like Utilities and Staples might find some pressure from the prospect of rising bond yields.

Although the Fed is probably a long way from actually raising rates, the benchmark 10-year Treasury yield flirted with three-month highs near 1.5% in the days after Powell spoke, and sometimes yields in the market can be a harbinger of what traders think the Fed is ultimately planning to do. The most recent set of Fed projections basically showed a 50/50 chance of a first rate hike sometime next year.

At this point, it feels like the market might actually welcome the Fed getting more hawkish, because the thing people have arguably worried most about lately is inflation. Tapering and eventually rate hikes are tools the Fed can use to combat rising prices, although Powell thinks the inflation we’re seeing is temporary and caused mainly by supply bottlenecks created as the economy reopens. The September consumer and producer price index reports due in October are likely to get very close attention when they hit the tape.

If the rise in yields continues into early October, look for bank shares to possibly benefit. A big part of their profitability depends on the rate picture, with higher rates generally helping their margins. The small-cap Russell 2000 Index (RUT) has a heavy weighting toward banks, so if it’s doing well in early October, it might be a signal that people expect a November taper.

Small-cap strength—if we see it—also could mean there’s more optimism about the domestic economy. These smaller companies tend to do most of their business here in the homeland, so they’re often a good barometer of U.S economic health. 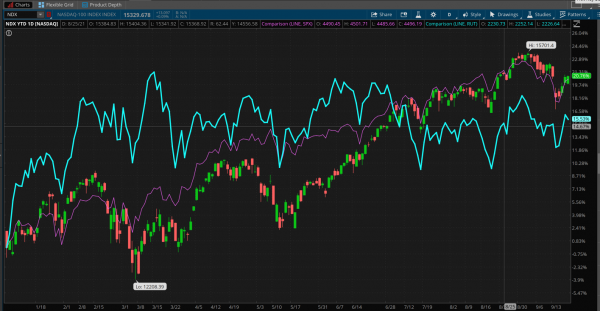 FIGURE 1: WRAPPING UP ANOTHER QUARTER. This year-to-date chart of the Nasdaq 100 (NDX—candlestick), the S&P 500 Index (SPX—purple line), and the Russell 2000 Index (RUT—blue line) show the large-cap indices outrunning the small cap RUT in recent weeks after losing ground to it earlier in the year. The “mega-cap” Tech and Communication Services sectors have pulled up the SPX and NDX recently, but now could face pressure from higher bond yields. Data Source: FTSE Russell, S&P Dow Jones Indices, Nasdaq. Chart source: The thinkorswim® platform. For illustrative purposes only. Past performance does not guarantee future results.

Here are a few data releases and events to watch for in October.

There’s other stuff going on in October beyond the Fed and the baseball playoffs (go White Sox!). October is the start of Q3 earnings season, beginning with the big banks in the middle of the month and followed by all the “FAANG” stocks and their tech cousin Microsoft (MSFT).

The major Wall Street banks like JP Morgan Chase (JPM) and Goldman Sachs (GS) have had impressive earnings performances so far this year and continue to find ways to improve profit despite a lot of headwinds. If the Fed is actually getting serious about a more hawkish policy, rising yields could become another arrow in the banks’ quiver, so to speak. As always, it will be important to listen to what the CEOs in both Financials and other sectors have to say about the economy, particularly any impact from supply chain issues and the Delta variant of Covid.

Early analyst estimates for Q3 S&P 500 earnings growth have it continuing at historically high levels, but well below Q2’s meteoric performance. Research firm FactSet now predicts 27.6% earnings growth for Q3, up from its prediction of 24.2% on June 30. It’s always good to see estimates gaining ground, because it likely reflects positive guidance from companies. Also, in Q2, more than 85% of S&P 500 companies exceeded analysts’ earnings estimates, FactSet said, so there may be plenty of room for the 27.6% number to rise from here if Q3 is anything like Q2.

China could also remain a focus after the Evergrande scare. Late in September, the beleaguered Chinese property developer said it would start making payments on some of its debt. However, Beijing is sending out signals that it might let the real estate giant fail on some of its obligations, namely those held by investors overseas.

It’s interesting how the Evergrande worries kind of faded into the background a bit after slamming Wall Street on Sept. 20 when a selloff took stocks down sharply for a single day. However, don’t dismiss the Evergrande issue, even if most stock indexes bounced back later that week.. For now it seems to be in the background, but these stories have a habit of coming back.

Another story closer to home that could bite the market in October is the battle over the debt ceiling in Washington, D.C. Several past Treasury secretaries as well as the current one, Janet Yellen, have warned about danger to the economy if this issue isn’t put to bed soon. The U.S. nearly defaulted on its debt back in 2011 during a similar congressional fight, and the stock market struggled through that crisis. More struggles can’t be ruled out if this continues, but for now it feels like investors are basically assuming the issue gets resolved amid continued partisan bickering without too much turbulence. We shall see.

Besides jobs and inflation data, another key government report to look for in October is the government’s first estimate for Q3 economic growth. The gross domestic product (GDP) report, due Oct. 28, will be the first solid report investors see on how the overall economy reacted to the Delta variant that apparently helped bring down jobs growth and consumer sentiment in August and early September.

The Fed now projects GDP to rise just 5.9% this year, compared to its 7% forecast in June. This may reflect the Delta variant’s impact. Having said that, the Fed now projects 2023 growth at 3.8%, which is up from its previous 3.3% estimate. The Fed’s GDP projection then slips in 2023 to 2.5%, but that is up slightly from the Fed’s previous estimate.

Even GDP growth of 5.9% and 3.8% would look pretty impressive considering the under 3% growth people have gotten used to pretty much since the 2008 recession. October won’t ultimately tell the tale on where GDP goes from here, but it could be a good harbinger of how the markets might behave heading into year-end, especially if we get more clarity from the Fed.