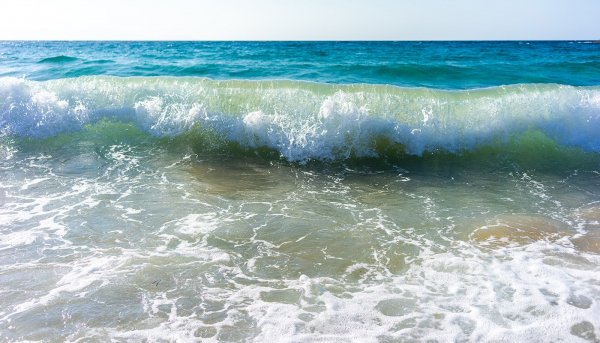 Whether you’re surfing the waves on Hawaii’s North Shore or the volatile markets on the trading screen, failing to catch the right wave at the right time can leave you vulnerable to a nasty wipeout. So before you jump in, paddle out for a moment and let’s take a closer look at the swells.

Surfers and traders share at least a few common traits (if you fall into both categories, we salute you). For either pursuit, recognizing and riding that big wave is crucial to your strategy. You have to know when to get in and when to get out; when to go big, and when to go home.

Markets are dynamic, just like the ocean. Prices are constantly moving, forming small and large waves which, in finance-speak, are called “trends.” Markets and trends are inseparable. Whether we’re talking about a blue-chip stock or a T-bone steak, prices don’t sit still. Over time, they change, sometimes moving faster than at other times.

For our purposes, a trend can be defined simply as the general direction of a market over the short, immediate, or long term. As in the ocean, markets have both tiny and huge waves, and some in between. A technical tool known as a simple moving average (SMA) crossover can help you identify the lion’s share of a trend.

Some stock moves are short-lived, while others last for weeks, months, or even years. If the trend is indeed your friend, to cite an ancient trading maxim, how can a SMA crossover system help? Start with three questions:

Which direction might the market be trending (if at all)?Where might be a potential entry point for a trend trade?When might a trend be ending or reversing?

Caveat: These principles are intended to help you interpret the potential direction of a trend, not to definitively call its direction. If a stock price is above the SMA, and if the SMA itself is moving upward, then there may be a stronger likelihood that you’ve identified an uptrend. The reverse may be true for a downtrend. But bear in mind that trends can change, and other indicators can also be used to interpret trend direction. They may even conflict with one another from time to time. 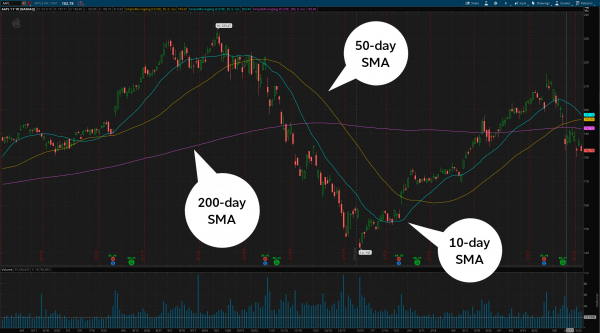 FIGURE 1: HOW LONG IS YOUR TREND? Shorter-term moving averages such as the 10-day (blue line) tend to closely track a stock’s daily and weekly ups and downs. In contrast, the 50-day (orange) and 200-day (purple) SMAs offer a smoother, more gradual look at the longer-term trend. To set up a moving average study in the thinkorswim platform, type in a stock symbol and under Charts > Studies select Add Study > Moving Averages > Daily SMA. Edit the time period (20, 50, etc.) via the Customization window. Chart source: the thinkorswim® platform from TD Ameritrade. For illustrative purposes only. Past performance does not guarantee future results.

What Is a Moving Average?

A moving average is a trend-following indicator that helps you determine whether the “average” price in a given time period is trending up or down. You can see the movement of a stock’s average price over time in relation to the actual stock price, which at times may trade above or below its moving average line.

How are moving averages calculated? Let’s take the 50-day simple moving average (SMA). To calculate the 50-day SMA, add up the stock’s closing price from the last 50 days and divide the total by 50. Each day, the average changes because the oldest day is subtracted, while the current day’s information is added.

Because the SMA is a lagging indicator, the crossover technique may not capture exact tops and bottoms. But it can help an investor identify the bulk of a trend.

Once you’ve assessed your time horizon, answer the following questions.

1. Where is the trigger for entry?

To create your own moving average crossover system, the first step is to choose your time horizon. As an example, we’ll look at an intermediate-term approach, which could include 20-day and 50-day moving averages. When the shorter average (the 20-day in this case) crosses above the longer average, that often signals a stronger likelihood of an uptrend. Some investors will take this as a buy signal.

2. When is the trend over or reversing?

When the shorter moving average crosses below its longer counterpart, that may signal that an uptrend may be ending or perhaps even reversing to the downside. Some investors might take this as a signal to sell their positions.

Why use two moving averages? With just one, a buy signal might be triggered whenever a stock’s closing price moves above the moving average. This signal may or may not be valid. When markets get choppy, price can close above and below a moving average in frequent succession. This can leave you vulnerable to getting whipsawed. The moving average crossover technique can help you avoid false signals and whipsaw moves.

To see how a simple moving average crossover system can generate trigger points for potential entries and exits, see figure 2. 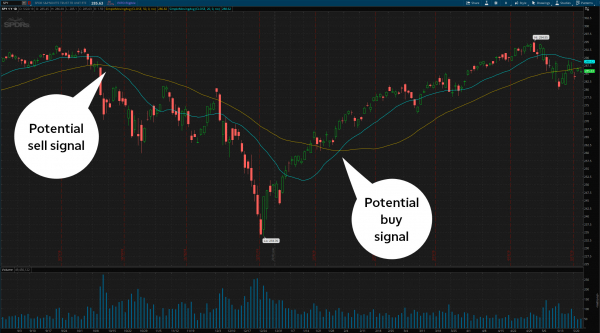 FIGURE 2: WHAT’S THE SIGNAL? A moving average crossover can generate potential buy or sell signals. Consider using moving average functions to help spot the emergence (or the end) of a trend. Chart source: the thinkorswim platform from TD Ameritrade. For illustrative purposes only. Past performance does not guarantee future results.

Confirmation is a basic tenet of technical analysis. Generally, no indicator or chart pattern stands alone. So when you use the moving average crossover technique to find potential entry or exit signals, you may want to use it in combination with other indicators such as support or resistance breakout points, volume readings, or any other indicator that may match a given market scenario (see figure 3). 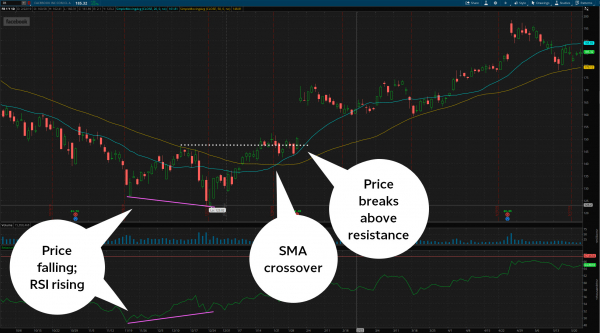 FIGURE 3: A MOVING AVERAGE CROSSOVER CONFIRMATION. The two purple lines signal a divergence between price, which is falling, and the Relative Strength Index (RSI), which is rising. This might signal a potential bottom. Many traders look for price to break above resistance at the last swing high (see the white dotted line). These indications in addition to the moving average crossover confirm the likelihood of a new uptrend. Chart source: the thinkorswim platform from TD Ameritrade. For illustrative purposes only. Past performance does not guarantee future results.

Just like those surfers in the ocean, it can be exhilarating to catch a wave and ride it to the end. Just be sure to pay attention to the exit points so you know when it might be time to jump off.