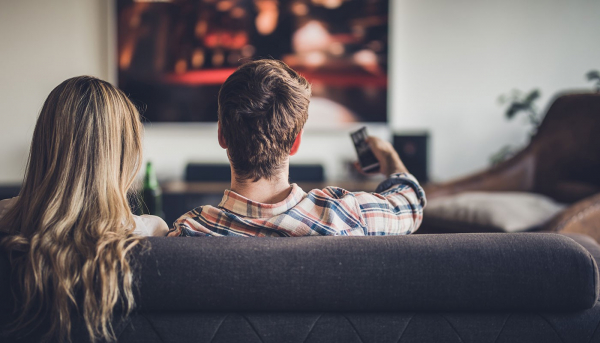 Netflix Earnings: Can NFLX Maintain Its Lead as Streaming Wars Heat Up?

Competition has become the four-syllable word that investors and analysts seem to be focusing on, as streaming content giant Netflix (NFLX) prepares to report earnings Wednesday, Oct. 16 after the close.

NFLX shares have lost some 27% since reaching a 12-month peak in May as rivals have entered—or merely threatened to enter—the online streaming world that the Los Gatos, California-based media services provider has long dominated.

That selloff began in earnest in July when NFLX startled Wall Street with a rare underwhelming performance of its membership base as the onslaught of the so-called “streaming wars” was readying for combat. But after bottoming out in late September, shares seem to be clawing back.

Is recent movement in share prices—up 13% from the September 24 low—an indication of newfound investor love or an aberration amid sleepy market action? See figure 1 below. 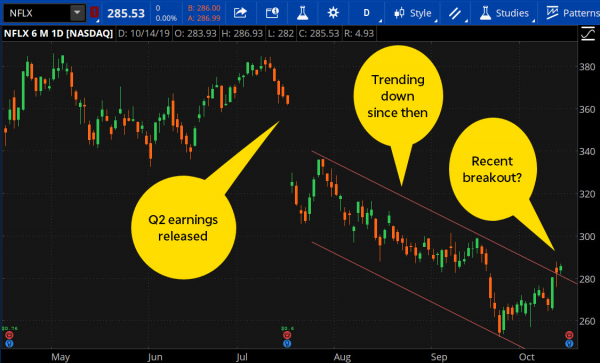 FIGURE 1: CHANGE THE CHANNEL? After reporting its first subscriber losses in 8 years, NFLX shares took it on the chin, then traded in a downward channel through the summer months. However, chart watchers might take the recent breakout above the channel as a positive signal. Data source: Nasdaq. Chart source: The thinkorswim® platform from TD Ameritrade. For illustrative purposes only. Past performance does not guarantee future results.

NFLX said in its Q2 conference call that gains in paid memberships, particularly among international users, rolled in at a disappointing 2.7 million new subscribers. Yes, that’s still an increase, but one that fell far below earlier comparisons, most notably the 5.5 million the company reported in last year’s Q2 and still remarkably below the 5.0 million the company had projected.

Also unsettling is that NFLX lost 126,000 U.S. subscribers during the quarter (a wide miss relative to an expected gain of 352,000, according to FactSet), which marked its first shrinkage in eight years. That lent itself to the appearance that rivals are threatening to take root and share of eyes, a key market metric.

Even NFLX Chief Executive Reed Hastings acknowledges the potential impact of the streaming wars. “While we’ve been competing with many people in the last decade, it’s a whole new world starting in November,” Hastings reportedly said at the recent Royal Television Society conference. “It’ll be tough competition.”

Walt Disney Co. (DIS), Apple (AAPL), AT&T’s (T) WarnerMedia and Comcast Corp.’s NBC Universal (CMCSA) are all at the ready to jump into the streaming content game as soon as next month, creating, at the least, a perception problem for NFLX even before these rival services go live. Even Amazon (AMZN) could become a threat, as it announced recently that it plans to up its content budget.

The stock pullback was deepened with news this summer that NFLX’s two most popular shows will be moving. The Office is set to migrate to the NBC Universal streaming service in 2021, and this spring, Friends is headed to WarnerMedia’s direct-to-consumer service on HBO Max.

NFLX also expects stepped-up competition from the likes of AAPL, for example, which is making plenty of headlines with its upcoming The Morning Show, starring Jennifer Aniston, Reese Witherspoon and Steve Carell. On top of that, DIS is removing NFLX ads across its TV networks, according to a report in The Wall Street Journal.

All this comes at a time when creating content has been getting pricier. Some analysts worry that the pressure on NFLX to produce more original content at higher costs could take a bite out of future earnings.

A handful of analysts have cut their price targets on NFLX recently as they prepare for subscriber growth that Goldman Sachs called “modestly below guidance.” NFLX has projected its paid base to expand by 750,000 subscribers in the third quarter.

Can NFLX Keep Its Running Start?

Analysts said they expect Hastings to talk about how these competitive disruptions might affect growth and profit margins as DIS and AAPL, in particular, enter the market during NFLX’s traditionally highest growth season.

Remember that NFLX has a huge running start on these new entrants, with more than 150 million paying subscribers worldwide. How might the company position itself to try to keep that lead? Many analysts said they will be listening to Hastings’ fourth-quarter forecasts on membership and content expectations for more insight.

They also said they’ll be tuning in to hear about NFLX’s global expansion plans—meaning, how NFLX might be planning to capture worldwide market share ahead of these new entrants.

NFLX is expected to report adjusted earnings of $1.04 per share, though estimates vary widely—from a low estimate of $0.98 up to a high of $1.23. Analyst consensus for revenue is $5.25 billion, up from year-ago earnings of 89 cents per share on revenue of $4 billion.

The options market seems to be reflecting the same uncertainty, having priced in an expected share price move of 8.7% in either direction around the earnings release, according to the Market Maker Move™ indicator on the thinkorswim® platform.

Put activity has been highest at the 285 and 265 strikes, but the highest volume overall has been on the call side, at the 300 strike. The implied volatility sits at the 48th percentile as of Tuesday morning.