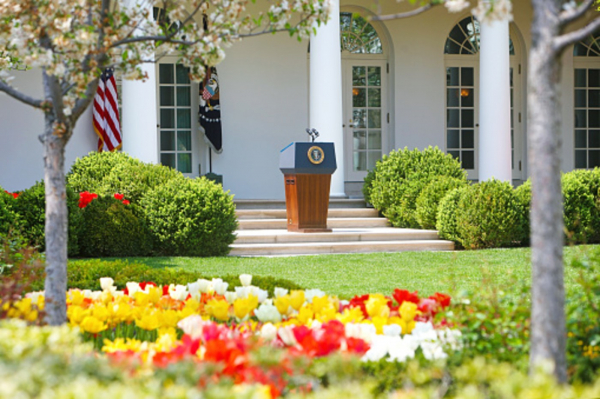 (Thursday Market Open) “Risk-on” looks like it’s back in style, with yesterday’s positive vibe extending into this morning. Stock futures pointed to a higher open following mostly stronger performances overseas as optimism about trade remains the top song on the charts.

The president’s comments yesterday about trade have people excited, and action so far this week shows that as an investor, it’s important not to let politics get in the way of trading. Consider paying more attention to what the market is focusing on, not the press. Right now, Wall Street’s eyes are focused on trade, not so much what’s happening in Washington.

When caution retreats, you often see things like yesterday’s moves higher in the Russell 2000 (RUT) small-cap index and in the Nasdaq (COMP), both of which led gains. Bonds also tend to climb. If investors remain optimistic today, it’s possible we could see more strength in those areas, and also maybe in transports, semiconductor stocks, and trade-related barometers like Caterpillar (CAT) and Boeing (BA). We’ll have to wait and watch.

The optimism around trade comes as China agreed to buy more U.S. soybeans and pork. To figure out where trade negotiations stand, it’s sometimes helpful to see whether China’s buying agricultural products from the U.S. or sitting on its hands. Call it the pork prognosticator, if you want.

If you like Fed speakers, today’s your day. Five of them are on the calendar, including Vice Chair Richard Clarida, who’s scheduled to speak later this morning. It’s still more than a month until the next Federal Open Market Committee (FOMC) meeting, but investors seem a bit confused about the Fed’s next move, so today’s speakers might provide some signals.

St. Louis Fed President James Bullard is one of the speakers today. He voted against the 25-basis point cut this month because he wanted a 50-basis point cut. He recently said the economy faces more downside risk, partly because of trade barriers, MarketWatch reported. He’s a noted dove and said he supports another 25-basis point cut next month.

On the topic of economic growth, the government released its final gross domestic product (GDP) number for Q2 today, leaving it unchanged at 2%. Not much to see there, really. Some economists think growth this quarter won’t be much different, either.

You might not have guessed there’s an impeachment process going on, judging from how stocks acted Wednesday. After political jitters helped send the market to its worst drop in a month when the news hit on Tuesday, things bounced back very nicely, with strength in a bunch of sectors that got slammed the day before.

Technology, Communication Services, transports, and semiconductor stocks got some traction Wednesday, in part from new optimism around trade with China. Right now, it seems like the market is clinging to every headline on this topic, and President Trump’s positive statement Wednesday appeared to counterweight the bearish words in his speech the day before that had contributed to losses on Wall Street.

Still, investors know that trade is a long process and day-to-day headlines don’t necessarily mean much. What matters is hearing about progress when the two sides begin seriously negotiating again, something that’s supposed to begin next month. A lot can happen between now and then, not necessarily all good.

That’s why it’s been tough for the S&P 500 (SPX) to get propelled much above the psychological 3000 mark. It might stay that way without a major trade deal, and moves above 3000 recently haven’t lasted long. So far, the intraday 3027 high posted in late July has held as pretty strong resistance.

There also might be some jitters ahead of October. Some people could be remembering what a volatile and difficult month that was a year ago, and October is historically a tough month. It’s been a pretty good year so far in the stock market, so it’s possible we could see a segment of investors take some profits and go home, so to speak, especially with so much geopolitical and domestic political turmoil around. That’s something we’ll have to be on guard for in coming weeks. News flow out of Washington could still be a factor the next day or two.

Energy was one cyclical sector that came under pressure Wednesday, hurt by rising U.S. crude stocks. If you didn’t notice, U.S. crude futures briefly traded back under $56 a barrel intraday Wednesday, basically all the way back to where they were two weeks ago before the attack on Saudi Arabia. It seems pretty surprising how quickly that rally faded.

It looks like investors kept at least one of their caution cards in play Wednesday despite the rally in some cyclical sectors. The U.S. dollar index, sometimes seen as a so-called “safe haven” investment, though no investment is really “safe,” climbed back above 99.

On the other hand, gold had a big sell-off Wednesday, its worst day in weeks. It seems like some investors might have bid gold up on Tuesday amid fears of impeachment, but possibly dialed back their gold positions Wednesday after a transcript of President Trump’s call with the Ukrainian president was released, Briefing.com noted.

Bonds also fell pretty sharply, with the 10-year Treasury yield starting Thursday back above 1.7%. That’s roughly in the middle of its recent range between 1.5% and 1.9%. Yields tend to rise when there’s more optimism—and less fear— about the economy.

The consumer appears to remain healthy, at least if you look at Nike (NKE) earnings. The rally there might have helped Consumer Discretionary stocks as a whole. With new home sales for August coming in better than expected, it would seem like consumers are buying more than just sneakers with the wage gains they’ve been collecting.

This surge of good news contrasts with Tuesday’s bearish consumer confidence reading, but it seems pretty safe to believe that consumers are positioned to stay in good shape at least through the holidays. If the trade situation hasn’t been resolved by then, things could change for the worse. 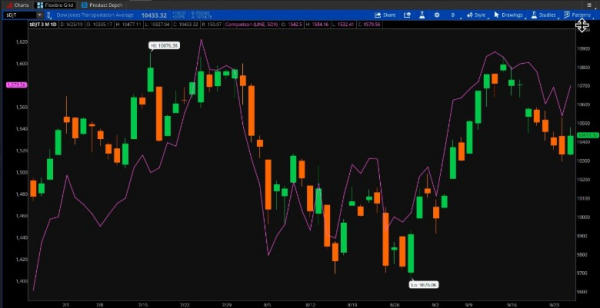 FIGURE 1:  BUMPY RIDE: If you’ve been following transports ($DJT-candlestick) or semiconductors (SOX-purple line) in Q3, let’s hope you had your seatbelt comfortably fastened. It’s been a topsy-turvy road for both of these economically-sensitive sectors, with both getting a boost recently from trade hopes and what appears to be investors moving into more cyclical-oriented sectors and away from defensive ones. That pattern faded late this month, but can it resume in October? Data Sources: Nasdaq, Philadelphia Stock Exchange, S&P Dow Jones Indices.  Chart source: The thinkorswim® platform from TD Ameritrade. For illustrative purposes only. Past performance does not guarantee future results.

Whistle Blows on Another Quarter: With just three sessions left in Q3, “window dressing” could be something to watch for the next few days. This is a phenomenon where already popular sectors and stocks sometimes get aggressive new bids the last few sessions of a quarter as fund managers get the quarterly reports ready for delivery to clients. They won’t want any questions from clients about why they didn’t have a position in the “flavor of the quarter,” so they buy winners before the door closes.

Window-dressing could help explain why Utilities and Real Estate stocks found fresh buyers this week, because both of those sectors have been top performers in Q3. Over the last month of the quarter, Financials and Energy stocks topped the leaderboard, so we’ll see if they get any new bids as the quarter closes out. The other side of window dressing is when fund managers sell stocks they’ve been losing money on, sometimes putting additional pressure on those names as the days wind down. Could this mean more ganging up on department store and health insurance company stocks over the next few days? We’ll have to wait and see.

Price Check: After more signs of life in the housing market earlier this week, some key inflation data takes the stage Friday. The Fed closely follows the Personal Consumption Expenditure (PCE) prices numbers, and they’re out before the open tomorrow. Last time out, in July, the inflation picture looked pretty tame. The question now might be whether any of the stronger inflation data seen in August consumer and producer prices shows up in the PCE report. Judging from analysts’ expectations, it doesn’t look that way. PCE prices are seen rising 0.1% in August, according to Briefing.com, down from 0.2% in July. The core PCE prices, which strips out food and energy, is seen up 0.2%, the same as in July. It also could be helpful to check the year-over-year numbers, which continue to lag below the Fed’s 2% target. If core prices—which rose 1.6% year-over-year in July—get closer to 2% in August, that could be one argument against a Fed rate cut next month.

Eye on the Ball: For long-term investors watching the impeachment proceedings and monitoring progress on trade talks with China, here’s something to consider: All this day-to-day stuff can raise volatility and cause big swings in the near-term, but that doesn’t mean you need to change your long-term investment strategy. If the politics get hotter in coming weeks, more volatility could be on the way. The challenge if you’re in it for the long-term will be to keep your eyes on your goals and remember not to trade out of fear. Trading is emotional, so consider taking care not to let outside things—like politics—affect your decisions.

Your strategy can definitely change over time, but consider any changes in light of your goals and whether they’ve evolved, not on the basis of day-to-day events in the news. One way to avoid making unforced errors is to not follow every tick of the market. There will be down days and even down quarters, as we saw late last year, but it’s important not to let that distract you. Instead, consider doing a quarterly checkup of your progress and if any major life goals have changed. That’s the time when it might be best to make changes in your allocations, but only if necessary.