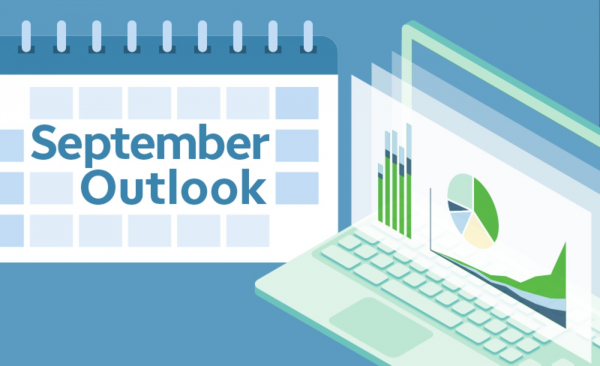 August jobs report, September Fed meeting could be touchpoints to watch in month ahead

Uncertainty is far from unusual on Wall Street and is arguably one big reason we trade stocks in the first place. But the level going into September stretches uncertainty levels to a place we haven’t seen in a while.

For many people, it’s just very confusing as to where to go and what to do right now because there’s so many mixed messages coming through. Some of the lighter volume in late August probably reflects seasonal trends. Having said that, people might be a bit less inclined to trade because it’s hard to have true conviction right now one way or the other.

The issues that potentially help make September so edgy won’t sound unfamiliar if you’ve been following things. The Delta variant remains front and center with no really good insight from doctors and scientists of when it might peak. The Fed’s policy remains a work in progress following the recent Fed’s virtual Jackson Hole symposium. Fed Chairman Jerome Powell made clear the Fed is soon going to be ready to start cutting back its $120 billion a month bond-buying program, but it’s unclear when this might start.

Then there’s the debate over infrastructure and budget issues in Washington, with the debt ceiling hanging over everything. Geopolitics aren’t exactly stable, either, following the U.S. withdrawal from Afghanistan and a tragic attack in late August that killed 13 U.S. service members there. Signs of possible economic slowdowns in China and Europe also linger into the new month.

With all this overhang and the S&P 500 Index (SPX) and other major indices coming through August on a long stretch of all-time highs, the stage could potentially be set for some seasonal weakness if we don’t start to get solid answers to at least some of the questions out there. However, one thing we can probably count on is at least some investors running to buy any dips in the market.

At least that’s what you might expect after watching the SPX bounce off its 50-day moving average on moves to the downside in mid-June, mid-July and again in mid-August back to new all-time highs. The old adage on Wall Street is that the trend is your friend, and a lot of investors seem to be going by that.

“CFRA thinks equity investors will continue to ‘buy on the dips’ until that strategy no longer works,” research firm CFRA said self-referentially in a recent note to investors. “Until then, equities should remain volatile as investors adjust the trajectory of economic growth expectations and await the announcement of (Fed) tapering.”

Fed Could Help Determine Direction Coming out of Jackson Hole

Another popular adage on Wall Street is to not fight the Fed. That’s been holding true pretty much since the pandemic began. Back then, the Fed immediately started a huge bond-buying program to keep borrowing costs low while reducing short-term rates to zero.

The stock market has doubled from its March 2020 Covid lows with the Fed providing a smooth path for companies to find easy money in hard times, and the recession ended almost as soon as it began. Fiscal support from Washington and other major economies didn’t hurt, either.

When you add it all up, we’ve just come off a first half that saw 6.6% gross domestic product (GDP) growth in the U.S., according to the latest government estimate, and a Q2 earnings season where average S&P 500 companies enjoyed almost unprecedented earnings gains of around 90%, according to FactSet.

One source of uncertainty is whether these big gains can last in the months ahead, especially with signs that China may be starting to run out of steam amid virus lockdowns there and a government crackdown on many big companies. A lot of the strength in economic and earnings growth was helped by easy comparisons against historic weakness the previous year, though it’s worth noting that many companies, most recently Best Buy (BBY) and Dick’s Sporting Goods (DKS), said they enjoyed growth vs. the same period two years ago, as well.

Also, several data reports in mid-to-late-August in both the U.S. and China pointed to a possible slowdown in growth, with the Delta variant and high U.S. inflation taking a bite out of consumer sentiment.

Back in 2015-16, a so-called “earnings recession,” declining U.S. consumer sentiment, and weakness in China combined to help put global markets into a winter tailspin that lasted several months. September is also historically a weaker time for the markets, though obviously history is under no obligation to repeat. Historically, markets tend to do better in the October through April period, though anyone who followed that tired saying, “Sell in May and go away” is probably kicking themselves now.

In his speech, Powell said the inflation we’ve seen so far still looks, to use his favorite word, “transitory.” Most of it has been in durable goods as demand for those items soared during the pandemic while demand for services lagged. Some of the price pressure on durables, like used cars, he said, is already starting to go away and may actually fall. This could ease inflation in the months ahead, perhaps putting less pressure on the Fed to change policy too much.

The Fed meets Sept. 21-22, and anticipation could rise ahead of that meeting as investors debate whether the taper calendar might be revealed then. A lot could depend on jobs and other data before that. If the Fed sees more progress on employment in early September, analysts might see a late September taper timing announcement as more likely. That’s especially because some Fed presidents around the country are calling pretty loudly for a tapering relatively soon to ease pricing pressure.

Don’t be too surprised if volatility starts ticking higher ahead of the Fed meeting. The Cboe Volatility Index (VIX) spent most of August between 15-20, relatively near historic norms. Any rise above 20 is something to consider keeping an eye on, because it could indicate market turbulence in the near-term.

Also, economic data could take on even more significance in September because of uncertainty over Fed policy. Everything is likely to be scrutinized as to what it might mean from the Fed’s perspective. 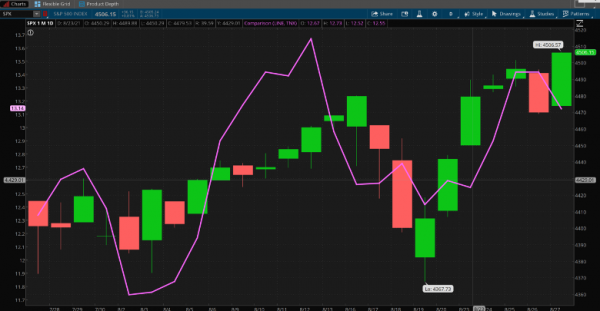 FIGURE 1: CHOPPY PATH HIGHER. Though they both saw choppiness along the way, the S&P 500 Index (SPX—candlestick) and the 10-year Treasury yield (TNX—purple line) both trended higher in August, with a bunch of new all-time highs for the SPX and the yield bouncing back from six-month lows. Data Sources: S&P Dow Jones Indices, Cboe Global Markets. Chart source: The thinkorswim® platform. For illustrative purposes only. Past performance does not guarantee future results.

Here are a few data releases and events to watch for in September.

Check out these upcoming webcasts.

That’s a mouthful. What about specific September events to watch beyond the Fed meeting?

It’s not earnings season anymore, which takes away the hum of regular corporate news that sometimes can shield Wall Street at least a bit from the worst geopolitical turbulence. As always, it doesn’t mean there’s no earnings news to watch during the “off-month.” For instance, Kroger (KR), Chewy (CHWY), Broadcom (AVGO), and lululemon (LULU) are some of the well-known companies expected to report in early September.

Still, data will arguably outweigh earnings as the focus when the month starts. That’s because of two key reports that always come at the start of the month and might carry more than their usual weight in this uncertain environment. Both the August jobs report from the Commerce Department and August Institute for Supply Management (ISM) manufacturing index bow as the month begins, and both could be watched closely for any signs of possible flagging in the U.S. economy.

We’re coming off of two very strong jobs reports in a row. June and July both saw the U.S. economy create more than 900,000 jobs, and May wasn’t too shabby either at above 600,000. Also, we’ve recently seen weekly initial jobless claims fall to their lowest level since Covid began. Another stellar jobs report, if it comes, could help solidify the Fed’s ideas about tapering, though you could argue there’s always more data and no one knows what the Delta variant might bring.

ISM manufacturing is also worth watching for clues about how the industrial sector is performing. It’s been near all-time highs for a while, causing some analysts to say the strength might flag.

An Autumn Trip to the Capitol

Speaking of industrial, focus could turn toward Washington in September as Congress gets back into session and wrestles with a bunch of spending bills, one of which is that $1 trillion infrastructure deal passed by the Senate not long ago. The question is whether it can get through the House.

Passage of this bill might help the Industrial, Materials, and Energy sectors. Failure could bring more stumbles for stocks of companies that make steel, gasoline, building materials, and other components used for major construction projects.

Other stuff to watch in September include the turbulent crude oil market, which bounced between $62 a barrel and $76 a barrel this summer, quite a big range. Like the stock market, there seems to be a regular “dip-buying” mentality here that might speak to investor confidence in the underlying economy.

Cryptocurrencies are also getting more attention as August ends. Bitcoin (BTC) recently hit $50,000 again after falling below $30,000 earlier this summer. At times, the direction of BTC has been helpful if you’re trying to assess the amount of “risk-on” psychology in the overall markets.

“Risk-on” seemed to come back a bit in late August after the U.S. Food and Drug Administration approved the Covid vaccine made by Pfizer (PFE) and BioNTech (BNTX). That drove ideas that more people might get vaccinated, potentially bringing down cases and helping the so-called “reopening” stocks like airlines, restaurants, and hotels. The Delta variant, however, could be taking a toll, as the government reported slowing growth in personal spending for July.

With that in mind, perhaps, the Treasury market still shows plenty of people trying to lessen their risk by putting money into fixed income investments. A 10-year Treasury yield of around 1.3% doesn’t really tell a story of an investment community that’s necessarily embracing the riskier propositions. Yields have been all over the place this year, from as low as 90 basis points (0.9%) up to 1.75%. Now they appear to be finding a middle ground between roughly 1.20% and 1.4%. Any departure from this range either up or down might raise some eyebrows.