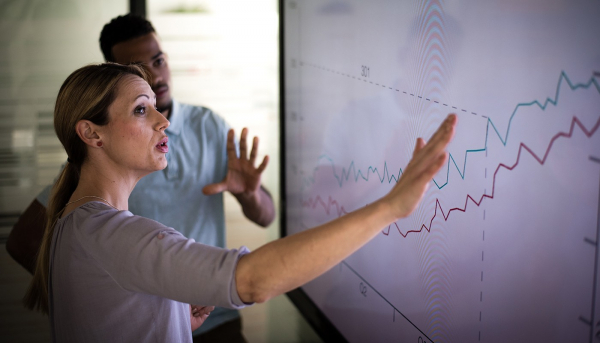 Charles Dickens might appreciate how the markets acted in June. In some ways, it was the best of months on Wall Street. However, things didn’t necessarily look so great if you consider all the caution under the surface.

Stocks reversed their May malaise and marched rapidly to new all-time highs by mid-month. The fierce rally, however, lacked a fundamental bullish underpinning. Instead, it likely reflected hopes for rate cuts, which typically mean economic troubles brewing.

What some people apparently forgot in June is that rate cuts aren’t necessarily good news. The Fed doesn’t cut rates when things are going well. It cuts them to help trigger growth in a slowing economy. In June, central banks around the world—including the Fed—indicated that they’re ready to provide more easing if needed, and that’s a message.

With rate cut odds rising to 100% for the Fed’s July meeting, 10-year Treasury yields collapsed in June to nearly three-year lows back below 2%, something that probably indicates a lot of trepidation about the U.S. and global economy. The 10-year yield was above 3.2% just last fall.

It was unusual to see stocks climb and yields slide together, and it might reflect how this whole rally seems to be built not on “animal spirits” that we saw back in 2017 and part of 2018, and more on caution. Many investors appear to hope that weakening economic data—including the soft May jobs report released in early June—could force the Fed’s hand and erase the most recent rate hike, or even two or three of them.

Amid the stock market’s rally, it was a month that saw gold prices climb above $1,400 for the first time since 2013 and market volatility remain elevated. The U.S. dollar, remained relatively solid as some investors continued to play defense.

It’s an odd situation, but maybe not as odd as it looks on its face. Yes, stocks rose along with Treasuries in June, but a deeper dive shows that equity strength was focused on a few sectors that traditionally play a “defensive” role. The strongest sectors continued to be ones like Utilities, Health Care, and Staples, though Technology also got a good bid later in the month and Financials started to outdo the broader market.

In a strong market environment, it’s often positive to see muscular sectors like Financials and Tech lead the way. That really wasn’t the case over the last month, though Materials are performing well. Instead, investors have continued seeking parts of the market that sometimes can offer less volatility and potential dividends in a low-rate environment. Staples and Utilities also got a bid last fall when the stock market dropped nearly 20%.

If you want to get a sense of why investors gravitated toward “risk-off” parts of the spectrum in June, consider what the Fed said on June 19 when it wrapped up its Federal Open Market Committee (FOMC) meeting with no change in rates.

Though Fed Chairman Jerome Powell said the outlook remains favorable, he also said uncertainties have increased since the early May meeting. These include the turbulent tariff situation between China and the U.S., slowing business investment, softer overseas economies, and weakness in inflation.

He talked about how these various “cross currents” have re-emerged more strongly in the last few weeks and need to be watched carefully. Some FOMC members, he said, are concerned about the inflation shortfall and believe a cut in the Fed Funds rate “would be appropriate”  if the economy continues in the scenario they see it most likely going.

With the Fed sounding dovish, stocks initially resumed their climb. Things slowed a bit, however, toward the end of June when Powell said in a speech that the Fed is “grappling” with policy decisions, and another Fed official said lowering rates by 50 basis points in July—something many investors had expected judging from the futures market—would be “overdone.”

We’re in a situation where at least a 25 basis-point cut is expected by many in July, and that’s currently seems to be fully priced into probabilities. Anything less could lead to a large potential sell off. Arguably, there’s little room for error with stocks trading this high.

Though the rate debate occupied center stage most of the month, some of the caution also reflected geopolitical currents that frequently hogged the headlines in June. Tension between the U.S. and Iran helped lift crude prices back toward $60 a barrel by the end of the month despite rising U.S. supplies, and there weren’t any real granular developments around the trade battle with China.

Spirits got a lift from news that Presidents Trump and Xi plan to meet at G-20 on the last weekend of June, and from Treasury Secretary Steven Mnuchin telling CNBC late in the month that he sees a “path” for an agreement. However, reaction was somewhat muted in the market. That could be due to the fact that we’ve had so many false positives. Maybe investors are starting to get to the point where they need to see proof.

Jobs Report Creates a Bit of a Conundrum

The May jobs report, which fell short of expectations, gave investors a reason to pause. Nonfarm payrolls increased 75,000 in May, versus the 180,000 expected, and the unemployment rate remained at 3.6%, a 50-year low. On the one hand, the numbers showed a softer-than-expected jobs scene, which can have a number of negative consequences for the market, such as softer consumer spending. On the other hand, the report could help make a case for a rate cut.

Notable economic reports in June also included the U.S. housing starts for May. They beat analysts’ expectations, coming in at 1.269 million. That compared with the consensus of around 1.24 million. One data point isn’t a trend, but this did look like a bit of positive news for the U.S. economy.

A Few Corporate Earnings Pave the Way for Next Season

The next earnings season is around the corner, but several major companies reported last month. Among them, athletic apparel maker Lululemon (LULU), which had been on a run the past year with shares up 40%, got another boost after it reported earnings June 12 that showed growth across all of its business lines as it beat Street estimates. LULU was up 47% year to date as of June 26.

The month’s positive earnings news also included home builder KB Homes (KBH), which easily beat Wall Street earnings and revenue estimates, showing that the housing market may be an area of strength in the economy as borrowing conditions, with low interest rates, remain in favor of buyers. KBH was up 7% following its report, with year to date gains of about 30%. Keep in mind that while the housing market seems to be hitting a positive streak, it still faces some struggles, especially given that prices are generally on the rise, which may be pricing some consumers out of the market. New home sales were down 7.8% from April despite the low interest rate environment.

Oracle (ORCL) shares also got a lift on its earnings and revenue beats, and shares were up 25% by the month’s end. In less impressive earnings, chipmaker Broadcom (AVGO) shares took a beating after its earnings report, where revenue fell short of analyst expectations, and cut its revenue guidance for the 2019 fiscal year.

In other corporate news in June, the newly announced merger between Raytheon (RTN) and United Technologies (UTX) is creating the second-largest defense and aerospace contractor after Boeing (BA).

The market for initial public offerings (IPOS) IPOs seemed to take off in June, proving a popular investment so far this year. Many of the high-profile recent IPOs are up double or even triple digits so far. By the end of the month, Beyond Meat (BYND), which debuted in May, was trading at nearly six times its IPO price as it prepared to launch its meatless “ground beef” product, which it plans to sell in major grocery store chains like Whole Foods and Kroger.

Among the IPOs this year that were in the green near the end of June: Crowdstrike (CRWD), Zoom Video Communication (ZM), and PagerDuty (PD).

Finally, the debut of Slack Technologies (WORK) June 20, although technically a direct listing and not an IPO, still underscored an appetite for newly public companies.