Some of 2018’s Big Market Headlines, and a Look at What Might Be Ahead – Professional ThinkorSwim indicators – Premium ThinkOrSwim Downloads & Indicators 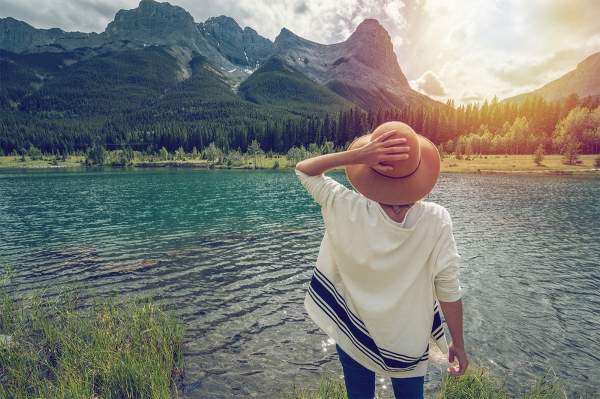 Some of 2018’s Big Market Headlines, and a Look at What Might Be Ahead

As has been the case for much of 2018, investor focus shifted between geopolitical news and corporate earnings

It’s hard to believe that 2018 is already halfway over.  Amid all the fun and excitement that summer brings, it can be easy to put off thinking about your finances.

The mid-year can serve as a reminder to check in on your financial plan, get an idea of where you’re at in relation to your goals, and evaluate if there are any changes you want or need to make.

To help you get started, I talked to several TD Ameritrade associates for their perspectives on the state of the markets and what investors might want to consider keeping an eye on in the second half of the year. On top of that, they also shared some great information about planning for retirement and where to find resources you can use to continue building your financial knowledge. I hope you find these insights helpful and informative.

The State of The Markets

How would you summarize the first half of the year? Any big surprises?

The first half of the year was probably a lot better than people were expecting after the rapid pullback in January/February. Most of the major indices, such as the S&P 500 (SPX) and Russell 2000 (RUT), are still at, or not too far off, all-time highs.

Consistent growth in the U.S. economy is one of the big factors that has helped support stocks. First quarter GDP dipped a little to 2%, but most analysts and economists have said they are expecting 2.7% to 3.1% for the full year.

The labor market is also still strong. Unemployment’s at 4% and wages have been increasing steadily.  Also, consumer sentiment is still on the high end according to the latest reports. So there are a lot of positives going for the economy right now. The question is how long can it keep going.

I think what was most surprising in the first half of the year was the lack of higher interest rates for U.S. Treasuries. At the start of the year, there were a lot of people expecting the 10-year Treasury yield to be past 3.25% by now. Instead, it’s been struggling to make a sustained move past 3%. 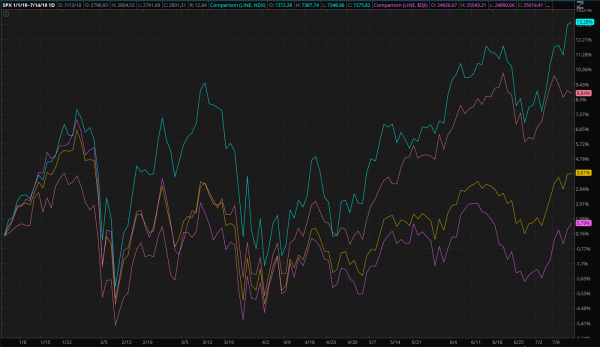 BENCHMARKS IN 2018. The chart above shows the 2018 performance for the benchmark indices: S&P 500 (SPX, yellow line), Dow ($DJI, purple line), Russell 2000 (RUT, red line) and the Nasdaq 100 (NDX, teal line). Year-to-date return as a percentage is shown on the right hand side of the chart. Chart source: thinkorswim® by TD Ameritrade.  Not a recommendation. For illustrative purposes only. Past performance does not guarantee future results.

What are some steps investors might want to consider taking now?

Since markets have continued to climb higher, it could be prudent to check your portfolio and see if those are the same investments you want to own going forward. Some of them could have rallied significantly, or you might want to rotate into other areas where you see better value. It’s really about making sure you’re comfortable with the level of risk in your portfolio.
Also, second-quarter Daily Market Update on the Ticker Tape.

Could you provide an update on where the major benchmarks are at from a technical analysis perspective?

The S&P 500 (SPX) has been trading well above its 200 day moving average since May (see chart below), although it did get down to that level a couple of times earlier in the year. The SPX was trading right around its 50 day moving average for about a week at the end of June and early July. But it recently bounced off of that level and has been trending above it as earnings season kicks off.  When stocks or indexes dip below those moving averages, their upward trend might start to lose strength.
The Dow ($DJI) recently broke back above its 50 and 200 day moving averages, although it has been trading below its 50 and has dipped below the 200 a couple of times in 2018. The Dow does represent a larger basket of companies that are spread out across a large section of global markets, so investors might see them dance to the tune of geopolitical concerns a little more than the S&P 500.

S&P 500 and the Dow. The S&P 500 is charted on the left side and the Dow Jones Industrial Average on the right. The red line is the 200 day moving average and the yellow line is the 50 day moving average. Not familiar with technical analysis? Here’s a quick video that provides an introduction. Chart source: thinkorswim® by TD Ameritrade.  Not a recommendation. For illustrative purposes only. Past performance does not guarantee future results.

The Russell 2000 (RUT) is well above its 200 and 50 day moving averages (see chart below). Some investors may have been rotating into small caps around all the tariff concerns, as their businesses are typically more domestic and not as exposed to international risks like larger, multinationals.
The Nasdaq 100 (NDX) is right above its 50 day moving average, and well above the 200, much like the Russell 2000 which would indicate it may still have some strength in its current trend.

Russell 2000 and the Nasdaq 100. The Russell 2000 is charted on the left side and the Nasdaq 100 on the right. The red line is the 200 day moving average and the yellow line is the 50 day moving average. Not familiar with technical analysis? Here’s a quick video that provides an introduction. Chart source: thinkorswim® by TD Ameritrade.  Not a recommendation. For illustrative purposes only. Past performance does not guarantee future results.

What challenges might the market face over the course of the rest of the year?

2800 has been a big resistance level on the S&P 500 (SPX). This was the high attained after volatility spiked at the end of January and start of February. The SPX is about 9 points above that level right now. I think that level is going to be an important one until we see a sustained move higher, which of course is not guaranteed to happen.

Over the course of the year, companies will be releasing earnings, economic data will keep coming out and the Fed will have a few more meetings. All of those things are likely going to play into how markets perform through the end of the year.  Trade tariffs, and the potential for that to keep escalating, could potentially weigh on stocks.
Outside of that, different sectors have unique factors relevant to them, both from a positive and negative perspective. For example, financials have largely been moving in line with U.S. Treasury yields. For the financial sector to break out of its current pattern, investors would likely want to see a change in bond price structure and the yield curve.

Is there anything you think investors might want to keep an eye on in the second half of 2018?

There is a lot going on in the energy sector. It’s possible there’s more demand than what is being estimated, as the economy, both from a GDP and inflation perspective, is running at about what’s been expected.
There have been some geopolitical supply shocks here and there that seem to have helped prop up oil prices. At the same time, some analysts have expressed concerns that pipeline bottlenecks in the U.S. will continue through the end of the year and pressure WTI crude oil prices.
The retail and consumer discretionary sectorsThe Ticker Tape is a great resource for article content.  Between videos and articles, those are probably the two ways I learn the most.

What if you’re just getting started and don’t know much about investing?

For people that are just getting started learning, the best part about our curriculum is it can take you all the way from the basics with stocks, up to futures, options and forex. No matter how much time you want to dedicate, or how involved, we have a level of content for where you’re at. You can find where you fit in the learning spectrum and then customize the curriculum to fit your needs.