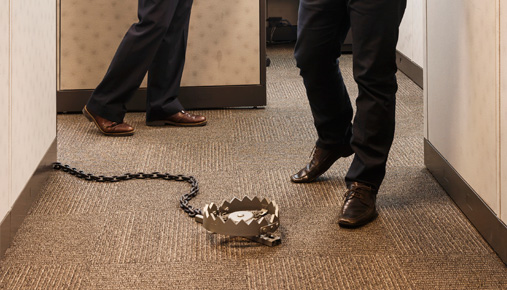 Are you looking for love in all the wrong places? If you think you’re going to find it the stock market every day, all the time, give up that notion now. Falling in love with a stock position might be a mental investing trap that shreds your profit-and-loss statement.

It’s called the “endowment effect,” and it’s a cognitive bias tracked by trading psychologists. Believers in the endowment effect argue that investors under its influence essentially overvalue the worth of the stocks they own and potentially hang onto a position perhaps longer than they should. The mere fact of ownership creates a psychological bias that those shares are “worth” more.

Researchers first identified the endowment effect through possession experiments using ordinary coffee cups. “Mere ownership caused people to demand substantially more to sell the cup than if they did not own it,” says Gary Dayton, a psychologist, founder of TradingPsychologyEdge.com, and author of Trade Mindfully (Wiley, 2014). “Once owned, sellers required about twice as much to sell the cup as they were willing to pay to acquire it.”

Don’t Be a Pollyanna

The coffee experiment extends to owning stocks, argue market psychologists. Sometimes investors become so enamored with a stock or the products and services that a company provides that they simply aren’t willing to part ways, even when it’s time, says Dayton.

He offers one example of an investor who owned Apple (AAPL) shares bought for what that investor considered to be an “attractive price” and that soon rallied. “When the stock ran into [technical chart congestion] and began to top, it probably should have been sold,” says Dayton.

But, this investor held on. Under the spell of the endowment effect, the investor had blinders on. In this case, he missed a flurry of news revealing that other companies began cutting into Apple’s market share. “He was captivated by the iPad and iPhone, their design, and what this investor considered to be leading-edge characteristics,” Dayton says. “He knew all the features, had the latest versions, and was the first to buy new releases. He delighted in the products and this amplified his perceived value of the stock. Because the iPad was so attractive to his personal use, he believed the stock had far more price growth ahead of it.”

You may be able to guess what happened next. “Instead of taking large profits at one point in the up-move, the stock eventually retraced to his buy-point and he made no money on the investment,” Dayton recalls.

Can You Beat This Trap?

Here, you’ll find a few tips that may help you beat back sneaky mind tricks.

Be open to new information about your stock. Endowment reflects a strong tendency to stubbornly stick to the initial investment strategy despite new and better information, says Dayton.

Be objective and consider potential negative factors. The endowment effect creates a tendency to focus on the positive features of a company and its products, while disregarding potential negative changes in earnings outlook, revenue growth, or the strength of the stock within its industry group, he says.

Create an investing plan and stick to it. Investors might do best by having a clear investment process that’s easy to follow, but one that cuts out the emotional factors. This could include price targets for all stocks in a portfolio and a clear exit strategy for times when the stock is no longer performing as expected or key assessment criteria has changed. A defined process forces the investor to look at all the data and evaluate the stock objectively, says Dayton.

We’ve Heard it All

Our experienced Investment Consultants can help you take stock of your emotions and review your strategy.

Find a TD Ameritrade branch or pick up the phone »