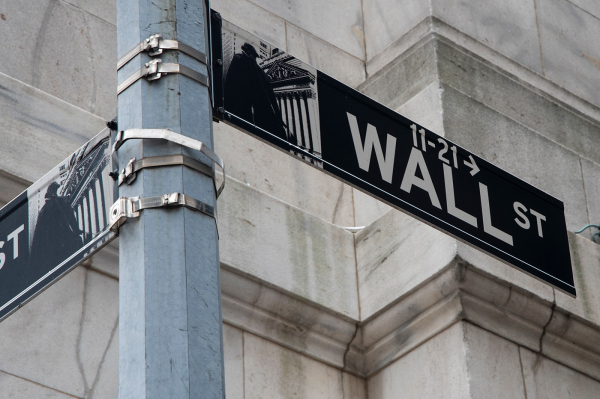 That Was Quick: After Sharp Rally, Rising Yields Put Stocks Back on Defense

(Thursday Market Open) With key inflation data and Nike (NKE) earnings on the near horizon, stocks leveled off early Thursday from yesterday’s fierce rally. A sharp overnight jump in the 10-year Treasury yield to back above 3.8% likely isn’t helping sentiment.

Other news dragging the market includes a worse than expected inflation report from Germany, where the inflation rate hit double-digits for the first time in the euro era, and more yield curve volatility. As long as the yield curve is in flux, the market will likely be in flux, too.

We’re near some important places on the chart, with S&P 500® (SPX) futures trading below 3,700 ahead of the open. Back in June, overnight lows fell below 3,640, and the lowest close was 3,666. That means where we’re trading right now is a key level that might need to hold if the market is going to have a chance to build on what happened yesterday.

Yesterday’s broad rally was impressive, involving every S&P sector and featuring the sharpest single-day drop in the 10-year Treasury yield since 2020. The yield retreat seemed to set the stage, but the question is whether major indexes can build on this rally in coming days, especially if yields tick higher.

What’s hard to tell is how much of Wednesday’s rally represented new investor commitment to the market and how much it reflected “oversold” sentiment. Recent rallies have had a very hard time sticking. This one could fade, too, especially when you consider that the Cboe Volatility Index® (VIX) remained above 30 yesterday and ticked a bit higher this morning. Elevated volatility means traders expect big moves, and there’s no guarantee the next one won’t be lower.

Investors might want to consider taking extra care venturing back into the market. This arguably isn’t a time to go “all in,” as things still look shaky and uncertain. The last 10 sessions have featured four 80% downside and two 90% downside days (meaning more than 80% or 90% of stocks declined), according to research firm CFRA. That kind of massive selling is similar to the type seen in March 2020. The question, according to CFRA, is whether this is enough of a washout to create conditions for the market to bottom.

Looking at today’s final read on Q2 gross domestic product (GDP), the headline came in at negative 0.6%, in line with Wall Street’s consensus expectations. No surprises there.

Of course, GDP is a backward-looking report. More important is what the economy might be doing now, as Q3 wraps up. The tidings don’t look too hopeful, because the Atlanta Fed’s GDPNow indicator projects just 0.3% GDP growth in Q3. The next update to that estimate is due tomorrow.

Tomorrow also brings key inflation data that the Fed is likely to watch closely. The August Personal Consumption Expenditure (PCE) prices report is the Fed’s preferred inflation indicator. The Wall Street consensus is for a headline PCE increase of 0.2% in August, vs. a drop of 0.1% in July, according to Briefing.com. Core PCE is seen rising a stiff 0.4%, compared with 0.1% in July.

Other data look a bit dicey, as well, with the housing market continuing to weaken. Pending home sales were down, and analysts are starting to downgrade more stocks. Initial jobless claims last week fell to 193,000 from 213,000 the prior week. This implies the job market remains hot despite the Fed’s efforts to cool things down.

Earnings season is still a few weeks away, but today provides a preview of what it’s going to be like when a bunch of high-profile companies report on the same day. The big names Thursday are Nike (NKE), Bed, Bath & Beyond (BBBY), and Micron (MU).

Shares of BBBY actually rose about 6% in trading ahead of the opening bell despite the company reporting a nearly 28% quarterly sales drop. The revenue was in line with analyst expectations, but BBBY’s $4.59 earnings loss was worser than analysts’ consensus earnings projection. The company is in the middle of a turnaround plan.

From a stock performance perspective, things didn’t look so rosy for shares of CarMax (KMX), whose shares fell nearly 9% ahead of the open after the used car retailer’s earnings missed analysts’ consensus views. Revenue also came in lower than expectations.

For MU, earnings day comes at an inauspicious moment following the chip sector’s descent earlier this week to new 52-week lows. The chips are worth a close look from anyone following the macroeconomic outlook. Falling chip demand, if that’s the case, could foreshadow falling demand for vehicles, phones, video games, and numerous other electronic items. In other words, it’s a good canary in a coal mine for a possible recession.

NKE has been on a downswing heading into earnings, hurt in part by investor fears that strong North American sales might not be able to make up for deteriorating conditions in China much longer. A stronger U.S. dollar could be another headwind. Two analysts lowered their price targets on NKE earlier this week. One question is whether this is a “sell the rumor, buy the fact” situation developing for the stock. If earnings indeed disappoint, as many analysts (and investors) seem to expect, does that mean shares have fallen enough? It should be interesting to watch after the close tomorrow, so pay attention to what NKE executives have to say on their call.

“Turnaround Tuesday” came a day late this week, with Wednesday’s brisk rally ending a six-session losing streak for the broader market. The S&P 500 rose nearly 2% to 3,719, and the Dow Jones Industrial Average® ($DJI) climbed 1.88%. The Nasdaq® (COMP) outpaced both with a gain of just over 2%, but the Russell 2000® (RUT) took the checkered flag with an impressive 3.17% gain.

Some big gainers yesterday included Netflix (NFLX), which rose 9.3% after getting an analyst upgrade, and Biogen (BIIB) up nearly 40% after delivering positive Phase III data on its early Alzheimer’s drug.

While it’s never wise to make too many conclusions from one day’s market action, and lower prices could still be ahead, the RUT’s performance yesterday turned some heads. As noted here, the small-cap RUT can sometimes signal when the overall market’s tide turns one way or the other. We’ll continue watching RUT in coming days to see if this was a blip or the start of a new trend.

The 10-year Treasury yield hogged most of the headlines yesterday with a dramatic decline back to 3.7% after topping 4% early in the session for the first time in more than a decade.

The 2-year Treasury yield traded at 4.11% late Wednesday, representing more than a 40-basis point premium to the 10-year yield. That kind of inversion is historically high, but down from a gap of more than 50 points last week. Many economists say an inverted yield curve is often associated with recessions, but this chicken and the egg story is still debated.

Every S&P sector finished higher on Wednesday, but energy led the way with a gain of more than 4% as Crude Oil prices roared back to nearly $82 per barrel from recent nine-month lows under $77. Crude got some help from a weekly U.S. supply report showing a drop in crude and gasoline stocks.

Crude might have gotten an additional lift from a slight decline in the U.S. Dollar Index ($DXY) to below 113 after it rose above 114 earlier this week. A strong dollar typically puts pressure on crude prices. The dollar is still historically high by any measure, so crude is far from out of the woods.

Other fast-climbing sectors Wednesday included many that typically do well when the economy is growing, including consumer discretionary, communication services, and materials. It’s interesting that for the second session in a row, defensive sectors like utilities and consumer staples got buried in the back of the sector pack. That, along with the drop in the dollar, could indicate a bit more of a “risk-on” sentiment, though it’s unclear if it has legs or just represents a market that seemed oversold.

Information technology was a laggard yesterday, thanks in part to Bloomberg’s report that Apple (AAPL) is backing off plans to increase iPhone production due to demand issues. AAPL shares fell more than 1% yesterday but finished off their lows, and also got downgraded by Bank of America (BAC). It’s not too often when you see a behemoth like AAPL experience a down day when the rest of the market rallies, but no one said these are normal times. 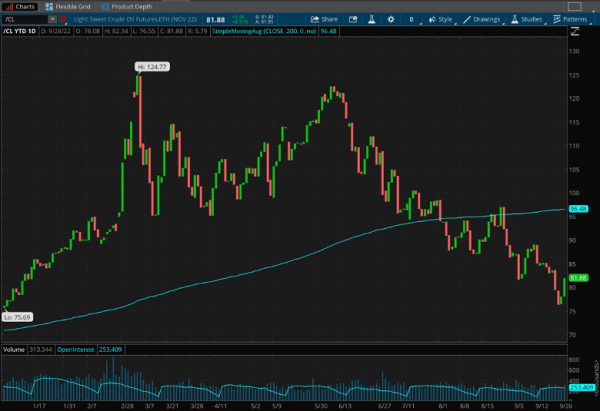 CHART OF THE DAY: OIL PRESSURE: U.S. crude futures (candlestick) had a nice rally yesterday, but this year-to-date chart shows the front-month futures contract remains well below its 200-day moving average (blue line), up above $96 a barrel. Data Source: CME Group.. Chart source: the thinkorswim® platform. For illustrative purposes only. Past performance does not guarantee future results.

Green Machine: The U.S. Dollar Index ($DXY) is now trading near 2001 levels, which are the same levels that helped spark the dot-com bubble burst. Coincidentally, the technology sector earlier this month had its worst two weeks since March 2020.  The next area of resistance for the $DXY appears to be the 120 level, which may be in reach because of the Federal Reserve’s commitment to cutting inflation. Strength in the dollar might also be tied to the situation in Ukraine, where the crisis appeared to be escalating earlier this week. Geopolitical worries often drive investors toward assets of perceived safety, like the greenback, though it’s worth noting that no investment is truly safe, especially in this environment.

Looking Forward: The worrisome thing about VIX isn’t so much the current level, which is elevated but not historically high. The troubling part is the VIX futures complex, where readings as of Wednesday were 29 or higher on contracts stretching deep into next year. If you chart it out, the line looks pretty flat over the coming months. As noted on the TDA Ameritrade Network earlier this week, a flat VIX at such high levels is an historic anomaly.

A VIX of 30 means traders are pricing in odds of a 2% move in the S&P 500 on any given day. These high VIX futures values imply traders expect uncertainty to last far longer than in a usual bear market. And that’s certainly longer than seen in 2020 when the VIX generally traded in the mid-20s most of the summer after spiking that March. Keep an eye on longer-term VIX futures over the coming weeks to see if they start to come down slightly. If they stay elevated, that’s not a very auspicious sign for the stock market in 2023.

Speakers Bureau: Fed speakers aren’t getting any less hawkish, and two more are on tomorrow’s schedule. One is Vice Chair Lael Brainard, whose topic is “Financial Stability Considerations for Monetary Policy.” Yesterday, Atlanta Fed President Raphael Bostic said he favors another 75-basis-point rate hike in November, which would be the fourth in a row, and a smaller rise in December. That would put rates at a 4.25% to 4.5% range by the end of the year, which is close to the median Fed projection for a peak of 4.6% in 2023.

At this point, some investors might be eager for the Fed to get all its hikes out of the way faster rather than dragging out the process far into next year. Some analysts, however, said the Fed has been moving too rapidly without watching and waiting for signs of how the hikes so far are affecting the economy. Next week’s September payrolls report could provide a clue about that.