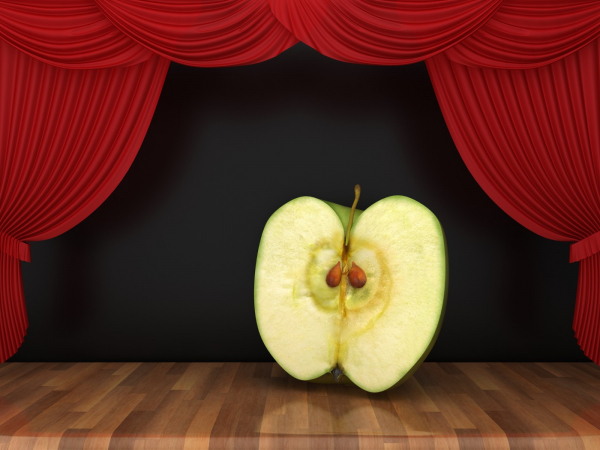 After booming iPhone sales growth last time out, Apple has a tough act to follow

Earnings provide chance to check on China, where company appears to be gaining traction

There’s so much news swirling around Apple (AAPL) that digging into the fundamentals seems like a monumental task. We’ll do it anyway as investors await earnings from the biggest company (in market cap) on earth.

The iPhone maker’s earnings report after the close Wednesday will come right after it unveiled a bunch of new products just a week ago, and following a solid fiscal Q1 for the iPhone maker.

If you’re keeping score, AAPL has a hard act to follow. In its fiscal Q1, it surpassed analysts’ estimates in almost every key category, whether it was iPhone sales, services, iPads, Macs, or wearables. Greater China sales rose 57%. Can AAPL hit it out of the park again? That’s what investors are wondering.

Going into earnings, consider keeping an eye on Services revenues—the category that includes cloud storage and backup, digital content and payment services. It’s grown so quickly that it’s elbowed its way up to the No. 2 business category spot for the company. The question is whether Services can keep up the strong traction it’s developed over the last few quarters.

Mac and iPad sales, too, might be a couple to keep tabs on, as many analysts have pointed out how the pandemic seemed to infuse new life into the lowly personal computer. AAPL’s rollout of new products last week (see more below) could be a harbinger of what’s ahead.

On the subject of “what’s ahead,” it’s something investors have had to basically guess the last few quarters. AAPL hasn’t offered guidance since the pandemic began. Will that change now that vaccinations are making progress? We’ll have to wait and see.

One thing that could be tough for AAPL this time around is exceeding iPhone expectations. It’s not too long since people were talking about the iPhone being a smaller and smaller share of AAPL’s total revenue. Then AAPL sold a record-breaking $65.6 billion worth of iPhones in fiscal Q1, a 17% year-over-year rise. Those results were helped by the introduction of new 5G models last fall.

AAPL faced some supply chain issues in fiscal Q2, and investors should also listen for any updates on those. However, it doesn’t look like anything AAPL couldn’t handle, according to Evercore ISI analyst Amit Daryanani.

Barron’s quoted Daryanani saying that AAPL is “well-positioned to report upside to March quarter estimates,” driven by strong performance by both iPhone and services, and despite ongoing component shortages.

“While the supply chain issues are real, we expect Apple will be relatively protected by its status as one of the largest electronics purchasers in the world,” the analyst wrote in a recent report. He points out that Foxconn, a key Apple manufacturing partner, has called out the tight supply of parts but said it would affect less than 10% of customer orders.

He notes that Apple had guided to some deceleration in services in the quarter after 30% growth in the December quarter, but he sees potential that the growth will be steady or better given strength in the App Store. 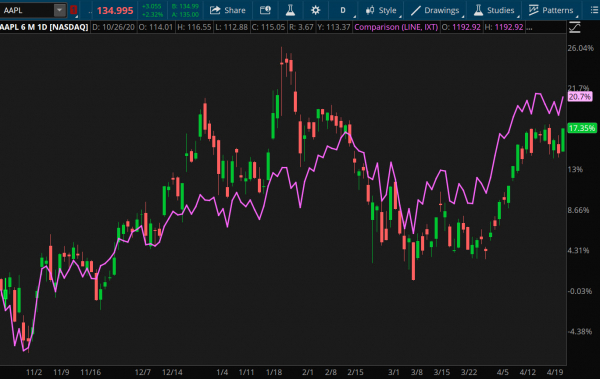 FIGURE 1: UNCHARACTERISTIC UNDERPERFORMER? Considering Apple’s (AAPL—candlestick) market dominance over the past couple decades, it’s rare that the nation’s largest company by market cap would be a laggard. But as you can see from the 6-month chart above, AAPL hasn’t quite kept pace with the S&P Tech Sector Index (IXT—purple line). Data sources: S&P Dow Jones Indices, Nasdaq.  Chart source: The thinkorswim® platform. For illustrative purposes only. Past performance does not guarantee future results.

Morgan Stanley (MS) analyst Katy Huberty, long a bull on AAPL, has big expectations, too. She’s forecasting better-than-expected results, even though what few product launches there were in fiscal Q2 didn’t seem to be of much significance—and certainly nothing like what we saw last week.

But count Huberty among those analysts that see more pandemic-related dependency on AAPL products as the driver—at least for the quarter that was—and into the future.

Or as D.A. Davidson’s Tom Forte, senior research analyst, said on CNBC last week: “The pandemic is a multiple-year event. We’re going to want to use as much of Apple’s products as possible to get through it.”

The pandemic fast-tracked so many pieces of our digital lives, ranging from the products we use at home and in the office to how we shop, eat and even entertain ourselves. What did people quarantined during the 1918 influenza pandemic do to ward off boredom? It’s a mystery.

Remember when AAPL CEO Tim Cook warned two years ago of a fiscal Q1 earnings shortfall he said was partly due to weak iPhone sales in China? Looks like things might have changed. Big time.

In fiscal Q1, China sales edged ahead in the total geographical breakdown of the numbers. The Americas sales are still far ahead of other continents, but greater China had a good showing.

AAPL is expected to report adjusted earnings of $0.98 per share, vs. earnings of $0.64 per share in the prior-year quarter, according to third-party consensus analyst estimates. Revenue is projected at $77.1 billion, up about 32% from revenue in the year-ago quarter.

Options traders are pricing in about a 3.3% stock move in either direction around the upcoming earnings release, according to the Market Maker Move™ indicator on the thinkorswim® platform.

Looking at the April 30 weekly expiration, activity in put options has been spread out, but with some concentration at the 125, 126, and 130 strikes. There’s been heavy call activity at the 140 strike. Implied volatility is at the 18th percentile as of Monday morning.

Still lagging Europe, the China segment made big inroads, catapulting 57% ahead of year-ago numbers in the last quarter. At sales of $21.31 billion, China was still some $6 billion behind Europe, but made significant headway from the year-ago period.

“China was strong across the board,” Cook said when the company released fiscal Q1 earnings in January.

It looks like fiscal Q2 got off to a good start in that region, too. Evercore’s Daryanani notes that iPhone shipments in China were up 185% in the first two months of AAPL’s fiscal Q2.

What is AAPL doing to generate this growth in China and what are the forecasts, not just for this year, but beyond? Considering China’s landmass and populace are far greater than Europe’s and its middle-class population is growing each year, it’s likely investors will want AAPL executives to discuss not just the Q2 China results, but the future outlook there.

That includes any potential fallout from political tension between the U.S. and China, which has had an impact on some other U.S. companies with a big presence there.

Apple’s product announcements are legendary, but the one last week fell a bit flat, at least if you judge by how the stock performs right afterward. Shares dropped 2% after AAPL introduced a colorful new iMac, an updated iPad Pro with 5G and the M1 chip that’s also used in the company’s desktop computers.

The earnings call Wednesday afternoon gives investors a chance to hear a bit more about how AAPL intends to integrate these into its existing product lines and stores, and also maybe some more color around possible financial implications. No one is saying any of these products is the equivalent of past triumphs like the iPod or iPhone, but AAPL takes pride in believing it can anticipate consumers’ future needs before the consumers even know what they are.

Still, this particular group of new products looks more evolutionary than revolutionary. And shares didn’t really need their help, anyway. After falling below $120 in Q1 of 2021 from highs above $145 earlier that quarter, AAPL shares have marched back above $134. While analyst price targets aren’t any kind of guarantee, for what it’s worth, Daryanani’s is $175.

A Dividend Hike in the Wings?

AAPL has a dividend, but maybe not as large a dividend as you might think considering all the cash flow.

Wells Fargo (WFC) analyst Aaron Rakers thinks more money could be coming back to investors. He’s looking for an announcement of an additional $50 billion share buyback. That compares, he said in a recent note to clients, to mega-increases in repurchases from 2017 to 2020 at $35 billion, $100 billion, $75 billion and $50 billion, in that order.

He’s also expecting a 10%-plus dividend hike given the significant free cash flow AAPL has been recording. He’s looking for what he called, “perhaps a more important near-term driver of shares” with the highest dividend increase since 2018’s 16% jump that he believes could return AAPL to an annual 10% dividend growth club.

Looking back at fiscal Q1, AAPL knocked it waay out of the park, blowing past Wall Street’s estimates by nearly 8% with a record-breaking $65.6 billion in iPhone sales that was better than 9% ahead of expectations. And remember, that was with stores closed and other pandemic-related disruptions.

All those sales also fueled another key component of the AAPL game as operating cash flow rang up to $38.3 billion.

“Our December quarter business performance was fueled by double-digit growth in each product category, which drove all-time revenue records in each of our geographic segments and an all-time high for our installed base of active devices,” AAPL CFO Luca Maestri said in the earnings release.

Here’s how those numbers added up: Service revenues hit $15.76 billion compared with analysts estimates of $14.89 billion; total sales on products, which goes beyond iPhones to iPads, Macs, etc. reached $95.68 billion, more than 8% ahead of the $88.2 billion analysts were looking for; and wearables skated past Wall Street’s $11.84 billion forecast by locking in $12.97 billion in sales.

For the quarter as a whole, AAPL’s $111.4 billion in sales was the first time the company ever topped $100 billion in a single reporting period, and sales for every product category rose double-digits.