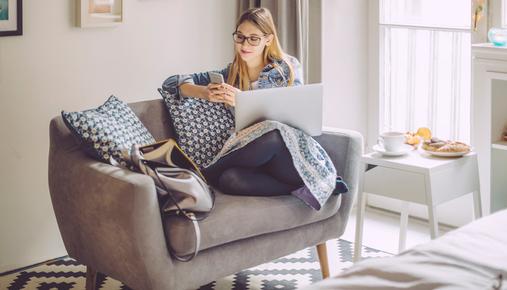 Convenience is king. That’s the new motto of the grocery store industry, which is transforming from traditional supermarkets that sell fresh and packaged goods for consumers to take home and load up in their refrigerators and cabinets to what the industry now calls grocerants. Underscore this development with online grocery shopping—a growing trend that allows consumers to order groceries online for pickup, delivery, or eat-in-store options.

Grocerants are a portmanteau of “grocery” and “restaurants,” and the confluence of online food shopping is giving them new ground. Amazon’s (AMZN) purchase of Whole Foods last year is weighing in as the e-commerce giant pushes what is becoming the Amazon grocery concept, buttressed by both the grocerant trend in Whole Foods stores and the Whole Foods delivery angle through Instacart. Many national, regional, and local grocery stores are following suit—though some have been practicing some form of grocerant and online food shopping for a few years.

Blame—or give credit to—the millennials, according to a number of food industry reports. Their lack of time, interest, and/or skill in cooking, coupled with a noticeable consumption preference toward fruits and vegetables, have challenged an industry that is mostly made up of regional and independently owned grocers.

Generation X predecessors are buying into the online grocery shopping trend, too, as are the baby boomers. “It isn’t that consumers don’t want to cook; they are looking for someone else to do the cooking or to make it extremely easy for them to do at home,” said Bonnie Riggs, industry analyst at NPD Group, a consumer research firm.

By 2022—four short years from now—online grocery sales could reach $100 billion in sales, representing about 20% of all groceries sold, according to a Food Marketing Institute (FMI) study conducted by Nielsen. That’s equal to every U.S. household spending some $850 a year grocery shopping online. Estimates of online grocery’s share of the total $641 billion U.S. grocery market vary, from 2% to 4.3%, according to FMI-Nielsen.

What People are Saying

Food shopping “is the next major retail sector to be disrupted by e-commerce,” said Pamela Danziger, founder of Unity Marketing. “While consumers have been slower to adopt online shopping in grocery [because of] entrenched shopping habits for this most frequently purchased category, and preference to personally examine and pick fresh meat and produce, online purveyors have helped consumers learn to like online grocery shopping and delivery by leading with packaged foods,” she said.

That’s true, but technology plays a big piece, too, according to JJ Kinahan, chief market strategist for TD Ameritrade. “Automated delivery has changed the game significantly,” he said. “And that’s only going to grow as the Amazonification of online grocery shopping expands.”

What to Consider When Investing

Investing in the trend could be tricky for a number of reasons, Kinahan said. The grocery store space has always been crowded, and margins on food products have long been skinny. “Retail, in general, is hard, and groceries are the hardest,” he added.

What’s more, many of these new concepts come during a low-priced commodity environment. If, say, for example, the price of corn rises, that has an indirect impact on the prices of everything from meat and poultry to tires. Margins then get squeezed further. “Rising commodity prices could be a game-changer,” Kinahan said. “For those who have a commodities bent, corn futures are one way to think about this.”

Only a handful of exchange-traded funds are food-based, and they are only thinly traded. Those with more oomph aren’t pure-plays, so investors should be aware of that.

Other competitors to Amazon’s grocery initiatives have been in the business longer—think Kroger (KR), Albertsons (ABS), Safeway, SuperValu (SVU)—while still others have bigger footprints, like Walmart (WMT), Costco (COST), and Target (TGT). They’re not sitting still on Amazon’s efforts. And then there’s the meal-kit business, which is still quite young but growing, through companies like HelloFresh (HFG), Plated, and Blue Apron (APRN).

“Groceries are a very competitive business, and what Amazon plans to do with the Whole Foods purchase is still uncertain,” Kinahan said. “They could use it for more than online grocery shopping, like as a showroom, or as a delivery service for in-home prepared meals. We’ll have to see what happens with Whole Foods in the future.”