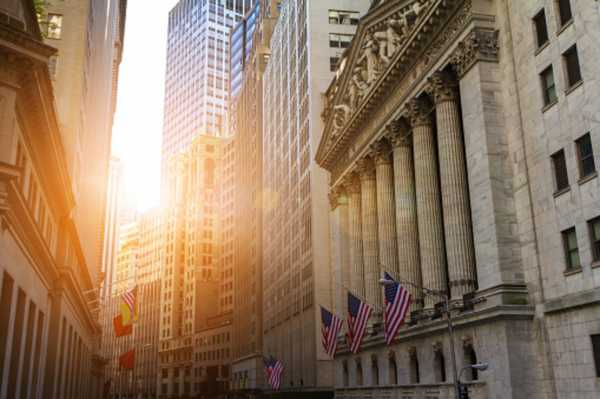 You’re Going the Wrong Way: Jobless Claims Jump, Pressuring Stocks, But No Week is a Trend

A higher-than-expected weekly initial jobless claims number of 1.1 million last week didn’t do anything to improve the mood, as stocks have a lower tint early Thursday.

While initial jobless claims moved the wrong way last week, it’s important not to get too caught up in one week’s number. We talk about this with the monthly employment numbers all the time. One week isn’t a trend, and weekly numbers are even more volatile than monthly ones because anything can happen in a given week, including a set of layoffs that can skew the numbers higher.

The key thing is the long-term trend. What you want to see is the number generally declining over many weeks and months. That’s been the case so far, aside from a few outlying weeks here and there.

Claims aren’t the only game in town today. It was good to hear that the U.S. and China might be resuming trade talks after all these months of tit-for-tat measures against each other. It’s hard to have incredibly high hopes for progress, though, considering the way things didn’t improve much after last year’s “phase one” deal got announced with so many fireworks.

After the bell yesterday came results from Nvidia (NVDA), one of the chip sector’s best performers so far this year. The company easily beat Wall Street’s expectations thanks partly to its data center business doing very well, but shares fell slightly in post-market trading.

There might have been some “whisper” numbers out there predicting an even better quarter that the company didn’t quite reach. Still, it’s hard to find a lot of fault with results that looked very good, overall. When a stock rises triple-digits year-to-date like NVDA, earnings day sometimes becomes a “buy the rumor, sell the fact” scenario.

Lately, a bunch of companies had their share prices “chipped” when solid earnings accompanied outlooks that came up short. That wasn’t the case with NVDA, which forecast better revenue for its current quarter than analysts had expected. The company is known for gaming, but their earnings showed them becoming more of a data company, and a lot of analysts lifted their price targets.

Another thing to potentially watch today is an up-move in volatility overnight. Sometimes when that happens without much of a corresponding move in stocks, it could be sending a signal of more selling ahead. It’s also a reminder that the market remains on hair-trigger alert and could shift quickly in response to any kind of news.

It felt like people were looking for an excuse to sell on Wednesday after the S&P 500 Index (SPX) inched to new record highs. The Fed minutes—along with Apple (AAPL) hitting $2 trillion in market share and a couple major universities postponing in-person classes—appeared to provide exactly what the bears wanted.

There wasn’t anything too mind-blowing in the Fed minutes, by the way, and it’s important to keep in mind that these minutes are nearly a month old. The Fed said what it’s been saying all along: The economy shows hints of improvement but much depends  on the path of the virus, which creates uncertainty. The virus could continue to “weigh heavily” on the economy. If all that sounds like a repeat of the last three Fed meetings, well, that’s because it basically is.

The Fed said what most people know, but having it spelled out in flashy headlines might have spooked some investors. We’ve had an amazing run, so profit taking isn’t too surprising at this juncture. Especially when you consider how far certain sectors like Technology have come.

Technically, we’re back to where we were before the sell-off, but there’s still a lot of sectors that aren’t close to recovering. That means anyone holding a diversified portfolio probably still has some positions that are in the red. The gap between “value” and “momentum” stocks is the widest ever, by some measurements.

There’s an old trading floor saying, “The trend is your friend,” and investors seem to be following that by piling into the FAANGS. At the same time, the run we saw for a while earlier this summer in cyclical and “value” sectors seems to be an on-again, off-again phenomenon.

Next Round Scheduled for Today in Value Vs. Momentum Fight

For instance, Wednesday was an “on” day for the “value” stocks, as the small-cap Russell 2000 Index (RUT) outperformed the Technology-dominated Nasdaq (COMP). Financials were the best-performing sector of the day, and regional banks are heavily represented in the RUT.

Banks might have gotten a lift thanks in part to a slight pullback in bonds following the Fed minutes. That seems a bit counter-intuitive considering what the Fed said about uncertainty, but maybe bonds are starting to reflect some of the better-than-expected economic data we’ve seen these last few weeks.

Looking ahead to the rest of the week, there’s not much major data on the calendar—which means the low-volume, summer-type trade might continue. This tug-of-war between value and momentum could go either way, too. We still have Foot Locker (FL) and Deere (DE) earnings expected Friday morning, which could help liven things up. 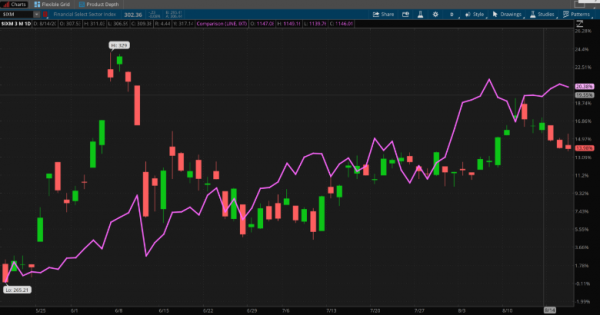 CHART OF THE DAY: SECTOR TUG-OF-WAR: Over the last three months, the Financial sector (IXM—candlestick) has sometimes pulled away from the Technology sector (IXT—purple line), only to fall back. It’s currently in fall-back mode, despite leading all sectors in performance on Wednesday. This tug-of-war between “value” and “momentum” that’s been playing out all summer shows Financials failing to get much traction following big gains back in late spring. Data Source: S&P Dow Jones Indices. Chart source: The thinkorswim® platform from TD Ameritrade. For illustrative purposes only. Past performance does not guarantee future results.

Cleared for Takeoff? Hold On: Solid data could also be helping the travel sector. Airline stocks are having a decent week, though the bar is set pretty low when it comes to the definition of “decent” for this beaten-down sector.

Some investors might have been cheered by Southwest (LUV) reporting “modest improvement” in August demand, but that doesn’t tell the whole story. The airline reported that improving revenue and bookings it saw in May and June “stalled” in early July as virus concerns clipped demand.

What the airlines arguably need is a new round of stimulus. If that doesn’t come, we could be looking at major layoffs across the industry by late next month. The first round was enough to keep payrolls covered through Sept. 30.

Trillions and Trillions: In 2005, most business-people carried Blackberries, and the S&P 500 had a market capitalization near $10 trillion. At that time, a certain company run by Steve Jobs was doing quite well but still a couple years away from introducing the iconic iPhone. Instead, the iPod was all the rage—especially the iPod Mini introduced that year that could hold 1,500 songs—and AAPL had a market-cap of around $30 billion.

Fast-forward to today. The total S&P 500 market-cap is above $27 trillion and AAPL just yesterday became the first $2 trillion stock. From being barely a blip on the radar in 2005 at 0.003% of the S&P 500’s total value, AAPL now composes more than 7%. It took just two years to go from $1 trillion to $2 trillion. To put that in perspective, that rise in value by itself is more than the actual value of all but a handful of stocks.

You could say that some of that value was cranked up by easy money, and that AAPL might not be here without indirect help from the Fed. However, AAPL, Microsoft (MSFT), and the other FAANGs and chip firms are arguably what’s keeping society going now when so many are stuck at home. Could we have had a shutdown like this 15 years ago without cratering the economy far worse than we’ve seen in 2020? Unlikely.

The Dreaded “D” Word: In 2004, responding to then-Treasury Secretary Paul O’Neill’s warning of a looming fiscal crisis, Vice President Dick Cheney allegedly said “deficits don’t matter.” In the short term, there’s some truth to that, but since each year’s deficit is added onto the existing national debt—$26.5 trillion as of the end of last month according to the Treasury Department—it’s money that must eventually be repaid, with interest. Some economists claim the rising debt load was one reason economic growth after the 2008 financial crisis was a bit tepid.

There are very few “fiscal hawks” out there these days, as the coordinated fiscal and monetary response to the pandemic has allowed the nation to keep its head somewhat above water while the economy sputters back to life. The Congressional Budget Office estimates the 2020 deficit to come in at $3.7 trillion. But then what? Will the U.S. go on a “debt diet?” The Bureau of Economic Analysis recently pegged Q2 gross domestic product (GDP) at -32.9%, to an annualized level of $19.4 trillion. That puts the debt-to-GDP ratio—a metric often cited by debt watchers—at 136%. That’s a new record, eclipsing the previous high of 118% at the tail end of World War II. For reference, the ratio was in the 60s during Mr. Cheney’s years as VP.

Will deficits and the national debt again become a topic of conversation among policy makers? Perhaps, but apparently not this year. We have enough to worry about in 2020.