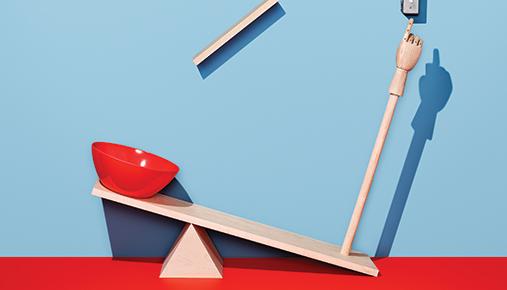 All the World’s a Trade: Market Perspective Through Global Events

When a butterfly flaps its wings in Brazil … you know how that story goes. But really? Can that butterfly set off a tornado in a faraway place? It’ll remain one of life’s mysteries, but for you, there’s a deeper meaning. It may not be a butterfly that creates market volatility. But it might be political unrest, economic issues, or crazy weather patterns.

The thing is, if you’ve got a bit of tunnel vision, and you’re stuck on trading your favorites, you may not be aware of China’s Belt and Road initiative, or the date of the next OPEC meeting. And perhaps you should be. Because being aware of the world, and how markets interact, can open up possible trading opportunities.

Perhaps you can’t directly access a specific international market. But you may be able to trade it indirectly. Let’s look at how.

It Wasn’t a Butterfly in Brazil

In May of 2017, corruption scandals in Brazil sent the Brazilian markets plunging. The country’s currency (the real), Brazilian bonds, and the Brazilian Bovespa Index hit lows not seen in about 18 months. Many large investors were overweight in their Brazil holdings, and when the news broke, institutions didn’t waste time unwinding their positions, as bonds, equities, currencies, and agricultural commodities were intimately connected.

What impact might a selloff in Brazil have on world markets? A first guess might suggest that ETFs with exposure to Brazil would tank, which they did. But think beyond equities—in emerging markets, Brazil is a dominant market and a large exporter of soybeans. So, when Brazil’s markets tank, does it affect soybean markets?

To find out how prices reacted to the headlines, fire up the thinkorswim® platform from TD Ameritrade and bring up a daily chart of soybean futures (Figure 1). Get a more detailed look by considering a shorter time frame, like one- or five-minute charts, to see how prices reacted when the news was released. 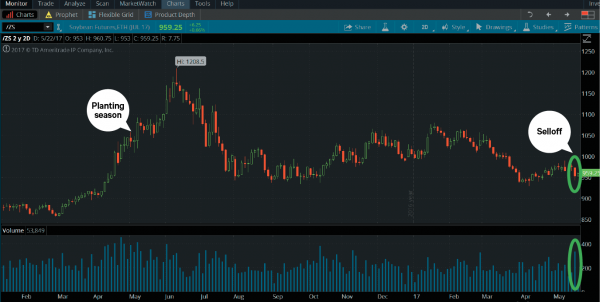 FIGURE 1: WHAT’S WITH THE SELLOFF DURING PLANTING SEASON?

Geopolitical events can throw you a curveball, so pay attention to other parts of the world. Source: thinkorswim from TD Ameritrade. For illustrative purposes only. Past performance is no guarantee of future results.

The U.S. is the world’s largest soybean exporter, with Brazil coming in second. Agricultural commodities follow seasonal patterns, so you can at least know when crops are planted and harvested. The U.S. and Brazil are also in different hemispheres—meaning their seasonal patterns will be nearly opposite. In April/May, planting starts in the U.S., and that’s when Brazil harvests soybeans. Soybean prices in Brazil can also influence global soybean prices. If the real depreciates, it will be cheaper to buy Brazilian soybeans, which in turn can impact U.S. export prices.

When it comes to trading agricultural commodities, traders often consider seasonal patterns. Soybean prices in general are based on speculation of future supply, and that becomes more certain toward the end of planting seasons. (Prices can hit a high after the end of planting, and then decline until the start of harvesting.) But other factors can play a role, too. Don’t overlook geopolitical events, currency valuations, extreme weather conditions, and to some extent, crude oil prices.

In the one-year chart of soybean futures in Figure 1, notice that in 2016, prices rose from April to June (planting season), fell until August, and traded sideways until October, the start of harvest season. The low of this trading range suggests a strong support level for soybean prices. Prices bounced above the support level in April 2017, right at the beginning of planting season. But the selloff on May 18 threw traders a curveball. How might this action impact prices going forward, and how could soybean prices affect other markets?

On the Industrial Road to China

China is one of the world’s largest soybean consumers, and it could take advantage of Brazil’s low soybean prices. China is also the world’s second largest economy, so it has a big impact on price movements in many commodities.

Let’s move on from soybeans to copper. If you’re aware of China’s Belt and Road initiative, you’ll know that China has plans to invest in more infrastructure and open up trade links globally. If all goes well, we can expect more demand for Chinese industrial commodities. One industrial metal closely related to manufacturing, industrial production, and construction is copper. As long as China has the demand for that metal, copper prices might rise. Yet, any signs of a slower Chinese economy, or a tightening monetary policy, could send copper prices lower. So, copper could be a leading indicator of future economic activity.

Trading copper futures is considered difficult for self-directed traders. You have to know the market well before you can implement complex strategies. But you may want to consider using copper futures to trade other markets that may be correlated, such as gold or oil. The tools to find these markets are ready for you on thinkorswim.

To get started, pull up a long-term chart of copper. Go to Studies, select Add Study, then Compare With and overlay different charts to see the correlations. Figure 2 shows the copper chart overlaid with crude oil. The two often move closely together, and they tend to be affected by similar factors. But correlations can also change over time. Some markets may be correlated only at extreme highs and lows.

Explore the different overlays and see if you can find helpful or interesting relationships. As your awareness rises, you might find other potential trading opportunities and come to a trade through a whole new door. Even though you can’t, say, directly trade the Shanghai Composite index, you can, in theory, indirectly trade China by knowing a bit more about copper futures. 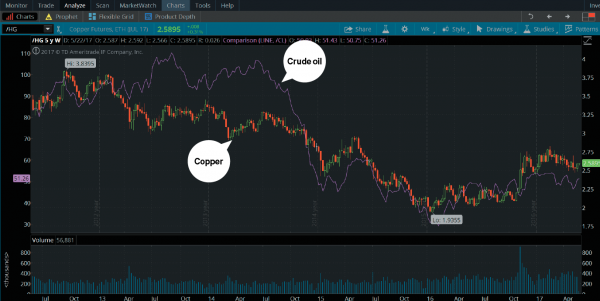 FIGURE 2: HOW CORRELATED ARE THEY?

When you overlay two charts, the answer becomes clearer. Copper and oil, for the most part, move together in this chart. Knowing this can help you create possible trading strategies. Source: thinkorswim from TD Ameritrade. For illustrative purposes only. Past performance is no guarantee of future results.

If you’re watching the world, don’t ignore Russia, which often has a dramatic impact on global markets and a strong relationship with the energy markets, especially oil. Yes, there’s more to oil prices than driving to the gas pump and filling up your car’s gas tank. Price movements in crude are often impacted by global events, especially geopolitical risk. Even a small conflict can spike oil prices. The biggest oil producers are Saudi Arabia, U.S., Russia, Iran, and China. The largest consumer is the U.S., with China coming in a close second. So keep an eye on the news for any hints and predictive headlines.

Crude oil futures are actively traded and can be volatile. Sure, certain variables like market demand, weather, and OPEC decisions can have an impact. But price movements in crude oil may sometimes be based on emotions.

Consider the chart of crude oil futures in Figure 3. On May 4, 2017, crude oil dropped to below $46 a barrel. If you go back to November 29, 2016, you’ll see a price of $44.82, which was the low for that day, and a strong support level for crude prices. After the fact, you can see that crude’s price almost reached that support before bouncing back.

When you see something drastic on a chart, it may be a good time to explore some fundamental research. Pull up your favorite news source—for example, you have access to the CNBC widget on thinkorswim—and look under the energy section to see what may have triggered a particular day’s selloff. It could have been caused by a slump in demand, uncertainty about oil’s future, or an excess in supply.

More to the point, that activity happened after OPEC’s decision to cut production to control supply. Could it be that traders weren’t convinced Russia was on the “supply-cutting” board? Or was it because U.S. oil inventories were higher? Turns out, none of the above. It could have been emotion triggered by forced selling.

Since then, oil prices have rebounded as traders await the oil producers’ meeting in late May 2017. The chart points to the next resistance level at $54. Will prices break out, or resume their trading range? 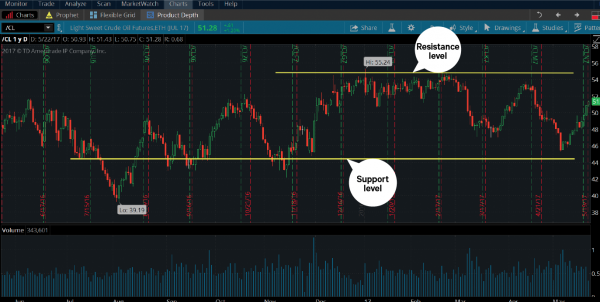 FIGURE 3: KEEP AN EYE ON RESISTANCE.

A breakout above the resistance level could mean further upside in crude oil. And if prices slide lower, watch that support. Source: thinkorswim from TD Ameritrade. For illustrative purposes only. Past performance is no guarantee of future results.

The scenarios presented here just scratch the surface. There are countless countries you can explore to determine how they relate to and shape other markets. You may even surprise yourself and find relationships you never thought existed. Start with the fundamentals, then narrow down to the technicals.

Train your brain to think differently. When you hear of a cyclone brewing in the Pacific, or a change in leadership in a European nation, think about how those events might hit the global markets. Which futures will be impacted, and how will those futures affect other sectors? Last but not least, figure out what new potential trading opportunities may come knocking. All you have to do is turn on your smartphone.