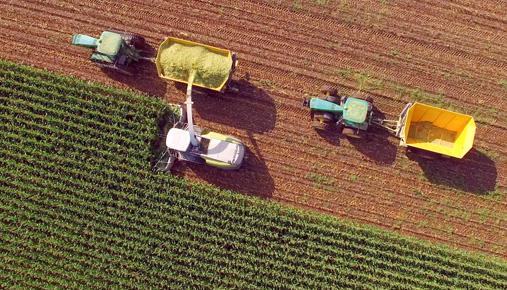 We all have to eat. That’s not exactly a portfolio strategy, but it’s a good place to start when contemplating investing opportunities in American agriculture.

The ongoing harvest season in the major grain-producing states of the U.S. Midwest offers just the latest reminder of agriculture’s year-round, 24/7 role—and also of ways for investors to get in touch with their inner “foodies.”

“We all know food,” says JJ Kinahan, chief market strategist at TD Ameritrade. “We are all familiar with the end product, and we know it’s vital to everything we do.”

Where to start with ag stocks in such a vast industry? Agriculture covers a sprawling, interconnected array of producers, suppliers, processors, handlers, and retailers—it’s constantly at the whim of difficult-to-predict factors such as weather, commodity prices, and geopolitics. Cash receipts for last year’s farm commodity production—grain, livestock, milk, and more—totaled $352.4 billion, according to the U.S. Department of Agriculture.

In other words, the path to your dinner table is a complex journey with many moving parts. For investors, it’s important to know a few basics about farming and agriculture, and the types of businesses that serve key functions.

Farming and the overall U.S. economy don’t always move in the same direction. In recent years, the farm economy slumped as record harvests and excess grain supplies weighed down prices for corn, soybeans, and wheat, three of the most widely grown U.S. crops.

For farmers, “it’s been hard to break even, or make profit,” said Sterling Liddell, global data strategist with RaboResearch Food & Agribusiness. “We’ve simply had too much production, and it’s putting balance sheets for crop producers in a difficult situation.”

For example, benchmark corn futures in Chicago traded around $3.50 a bushel through early fall 2017, and into the harvest period, about half the levels of three to four years ago.

Putting the Crops In (Equipment Manufacturing)

In the current climate, farmers may be less inclined to drop $200,000 or more for a new tractor or harvester. Grain markets “don’t look like they’re going to recover anytime soon,” Liddell said. With farmers’ eroding incomes, “it’s hard to cover the debt they have, so buying additional equipment or fertilizer would be difficult.” A market recovery probably won’t happen till around 2019, he added.

Still, many major ag equipment makers also serve other industries, such as construction and landscaping, which can mitigate downturns in the farm economy, experts say.

Corn (so-called field corn, not to be confused with the sweet corn people eat directly off the cob) is the biggest U.S. crop based on several measures, and it plays a critical role in the global food supply.

About 5.4 billion bushels was fed to cattle, chickens, and pigs, and a similar amount was used to produce ethanol; another 2.3 billion bushels was exported. Much of the rest was processed into food ingredients, including sweeteners, starches, syrups, and more.

Crops require “inputs,” starting with the seed, along with herbicides, pesticides, and nutrients. If farmers are planting less grain because of weak prices, it follows that they won’t be using as much seed or fertilizer, although—similar to the equipment makers—many companies in this sector have gotten bigger through recent mergers, and are diversified across other industries.

Ag-related businesses often use downturns as opportunities to get leaner and be ready to capitalize on the inevitable upturn.

“These companies will have to work harder for market share and figure out how to sell their products into this market,” Liddell said. “The current economic climate is a chance for companies to slim down and adjust balance sheets, so they can be more effective in the future.”

Serving It Up (Meat and Grain Processing)

This sector is about taking raw material and turning it into the higher-value ingredients and products that ultimately end up lining supermarket aisles. These companies can benefit when cheap, abundant grain might boost profit margins—although, like farmers, they too must manage market volatility and geopolitical risk. Because much of the U.S. corn crop is used to fatten livestock, meat processors are also affected by grain supplies and price swings.

Farmland might be considered the classic agricultural play, but it may not be accessible for many investors. In addition, farmland prices have tumbled with the grain markets (average values in Iowa, for example, are down about 25% from 2013 peaks, according to Iowa State University).

Another option: exchange-traded funds (ETFs) linked to corn or other commodities.

“There’s a tech element that people may not think about,” Kinahan says. “As the technology improves, farmers will continue to invest in it.”