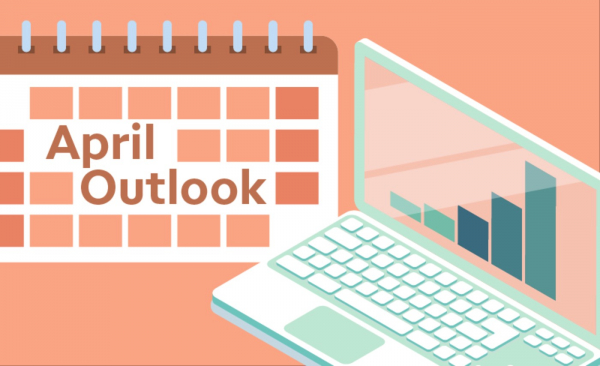 The battle of the bands that’s played all year—growth vs. value—could keep blasting away in April as investors ponder rising Treasury yields, a reopening economy, and a Fed that’s staying on the sidelines. It’s a bit of a tug-of-war.

So far, value is having more fun after growth surged in 2020. Strong economic data, rising commodity prices, the relentless yield rally, and vaccination progress provided a nice boost for some of the big Industrial, Energy, and Financial stocks that stayed in the background last year while big Tech racked up the gains.

We’ll see if that continues in April or if Tech can regain some shine after suffering a correction in March. The new month brings a fresh earnings season, another Fed meeting, and hopefully more of a return to normal for people who’ve been isolated all these months of winter and Covid. Consumer spending is already growing as people get vaccinated, but the real test likely comes starting in May when the government predicts anyone who wants a vaccine can get one.

Here are some events and developments to consider watching in April:

Obviously, all of this reopening optimism that helped lift major indices to all-time highs in mid-March depends on continued progress against Covid. Recently, average U.S. daily caseloads and deaths were thankfully far lower than earlier this year, but still not down to where they were last summer.

Vaccinations have been humming along in the U.S. and there’s a lot of hope the country could be back on a more normal footing by summer. The caveat being that if these new virus variants start lifting the numbers, it could cause problems.

Just look across the Atlantic to see what can happen when new variants appear and vaccination progress lags. That’s led to new shutdowns in Europe and concerns that economic recovery predictions might not come to fruition so fast. It’s also contributing to a tug-of-war between stocks that would benefit from an economic reopening and ones that thrive in a lockdown. For instance, travel stocks might sag if the continent continues to struggle.

There’s nothing the market can do about the virus, of course, but as an investor, you’re at a point where it may be a good time to take a look at your portfolio and see how Q1 played out. The start of a new quarter is usually a good milestone to review your goals for the year and make sure your portfolio still reflects where you want to be.

If you went into the year with, say, a 60-40 split between stocks and fixed income, that may have gotten skewed over the last few weeks and your stock exposure might be higher than you’d planned. On the other hand, if you do plan to make changes to your portfolio, it’s typically a bad idea to make them in a large way all at one time. Small changes over a longer time frame, and perhaps at different price levels, can help keep you on track and avoid making rash decisions.

There’s nothing wrong with evaluating your holdings and seeing where it might make sense to trim or even move some money to the sidelines. Major indices raced to new all-time highs in mid-March thanks in part to strong economic numbers and a dovish Fed. Considering that, it may not be the best time to go “all in” on equities. Instead, think of slowly adding to positions if you do want to put more money in the market. 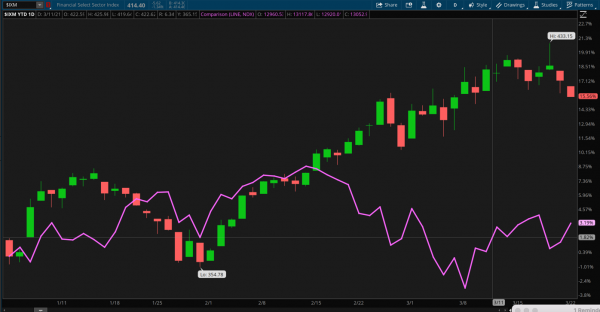 FIGURE 1: GROWTH OUTRUN. This year-to-date chart of the S&P 500 Financial sector (IXM—candlestick) vs. the Nasdaq 100 Index (NDX—purple line) shows how much better the “value” sector of Financials has performed vs. many of the high-flying growth stocks represented in the NDX. It will be interesting to come back in two months and see where these two metrics went from here. Data sources: Nasdaq, S&P Dow Jones Indices. Chart source: The thinkorswim® platform. For illustrative purposes only. Past performance does not guarantee future results.

Here are a few data and events to watch for in the coming month.

For months now, you’ve heard about how reopening progress and higher Treasury yields lifted sectors like Financials and Energy. As companies from these sectors report Q1 earnings starting in April, investors can find out if this rally is on firm ground. In the long run, earnings arguably matter more than any other metric.

The banking industry has taken body blow after body blow over the last five years and still hung in there like a great boxer getting punched in the face and refusing to go down. Cost cutting and some reorganization helped get them through. Now, banks have had a bit of a tailwind as the economy recovers and the yield curve steepened in March to its highest level since mid-2015. A higher yield curve often helps banks’ net interest margins—the spread between what they pay on deposits and what they make on loans—and often see the impact go right to their bottom lines.

Trading is also a big part of some banks’ business, and bond market trading has provided a lot of opportunities lately.  So has a blistering housing market, which likely increased the appetite for mortgages. With all this support, any large or medium-sized publicly-traded bank that can’t show some Q1 earnings muscle is probably going to get sent to the woodshed by investors.

Other early-reporting sectors in April include the airlines and some other hospitality-related stocks, many of which are also seeing great opportunity after a really disappointing 2020. Air traffic as of late March hadn’t come back to pre-Covid levels, but was heading in the right direction. Passenger flow reached around 1.3 million passengers a day on average in March after hardly ever getting to one million a day last year once the pandemic hit.

Airline stocks have soared since the start of 2021, with hotel and casino stocks also getting in on the action. Investors are going to hear from some of the major airlines in April and could conceivably get a better sense of how they see the summer travel season shaping up. United Airlines (UAL) and American Airlines (AAL) could be two to watch. Boeing (BA) is another travel-related firm that could report in April, and it recently reported positive news about improved orders.

So far this year, there hasn’t been a really easy pattern to follow in the jobs data. February saw a very robust 379,000 new positions but January was light. On Friday, April 2, the Labor Department is scheduled to deliver its reading for March following a few weeks of initial weekly jobless claims generally trending lower.

Most of the February job gains came in the services sector, a good sign that more of the hotel, airline, and restaurant positions might be coming back. Manufacturing and construction, however, have been a bit weak lately. That’s something investors might want to look at closely in the March data, because those are the jobs that tend to be higher paying.

As always, it’s important to monitor other data, too, particularly the ISM Manufacturing Index due out April 1. It’s had some really strong outings lately. Also, keep an eye on weekly crude supplies during the month. These have been on the rise, helping push crude prices down in late March.

It seems like the Fed just met, but there’s another Federal Open Market Committee (FOMC) right on the horizon during the last week of April.

The median Fed policy outlook released in March doesn’t anticipate any rate hikes from current levels near zero until 2023 at the earliest. Rates remain where the Fed set them a year ago when the pandemic first hit. Meanwhile, the Fed sees amazing 6.5% economic growth this year with a little bit of an uptick in prices.

The April meeting isn’t going to deliver any new long-term rate outlook and seems very unlikely to feature any interest rate moves, either. Still, investors will likely be on the edge of their seats judging from the way stocks and bonds responded to the March meeting. A big initial rally in stocks got followed by a sharp rise in Treasury yields and a stomach-churning 3% drop in the Nasdaq (COMP) the day after. The benchmark 10-year yield had already climbed about 75 basis points from the start of the year before the Fed met, then jumped another 10 points to 1.75% the next day.

Fed Chairman Jerome Powell gave a fairly bullish testimony on the economy, but the market seemed to be saying this improving economy could push the Fed to change its dovish stance.

It’s actually pretty bold of the Fed to stick to its guns on rates when you consider how cautious the central bank typically has been. They seem to be betting that what happened in the years after the Financial Crisis of 2008 will repeat, with no inflation amid accommodative conditions and the bond market not getting unruly. If things do continue to go the way they did in March with yields, will the Fed start warning about next steps? That’s the question as the next FOMC meeting approaches.

The FOMC meeting doesn’t start until April 27, so by then investors will have a clearer picture of the long-term market response to what really feels like a new regime the Fed has set up where it waits to see firm evidence of stronger data before making any moves.

Remember—regarding rates—the Fed only controls the overnight rate and the rest is controlled by the market, so this spread between the short end and the long end of the yield curve (which measures rates of everything from overnight to 30-year yields) keeps getting wider. That’s not necessarily a bad thing, especially for the Financial sector. The spread between 2-year Treasury yields and 10-year yields is now the highest since July 2015 (see figure 2). 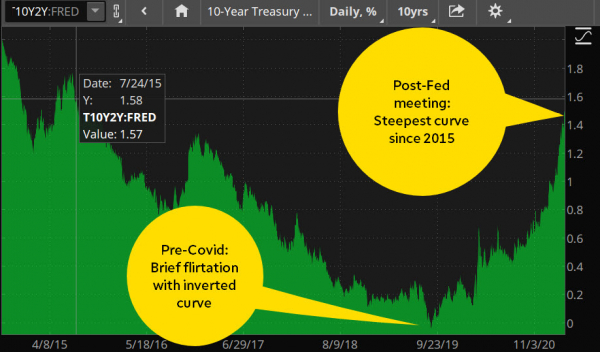 FIGURE 2: MIND YOUR 2s AND 10s. After the last Fed meeting, the spread between 2-year and 10-year Treasury rates (the “2/10 spread”)—often seen as a proxy for the slope of the yield curve—moved to its highest level since July 2015. The central bank reiterated its commitments to keep the Fed funds rate at 0-0.25% for an extended period as well as allow inflation to run hot. Recall that the 2/10 spread traded negative for a brief period in the summer of 2019. Data source: Federal Reserve’s FRED database. Image source: The thinkorswim® platform. FRED® is a registered trademark of the Federal Reserve Bank of St. Louis. The Federal Reserve Bank of St. Louis does not sponsor or endorse and is not affiliated with TD Ameritrade. For illustrative purposes only. Past performance does not guarantee future results.

What a rise in long yields does tend to do is weigh on the Tech sector and other major growth names. Apple (AAPL), Tesla (TSLA), Microsoft (MSFT) and the semiconductors arguably have all been hurt by rising yields, and so have the so-called “pandemic” Tech stocks like Peloton (PTON) and DocuSign (DOCU)—which have to prove they can grow earnings. Higher yields can make that more challenging for many young companies, and people have been taking profits on the Tech companies that brought us here.

No one knows how high yields might go (and yields did pull back a bit after the meeting) but it’s worth noting that at 1.75% where it was in late March, the 10-year yield is already above where many analysts had expected it to be by the end of the year. It’s also above the average S&P 500 dividend yield, which could mean we see more investors embracing fixed income over equities in the coming months. That’s definitely something to track in April.

All this means the “battle of the bands” is probably not even close to intermission, and we can all strap in for what looks like another noisy and volatile month on Wall Street.