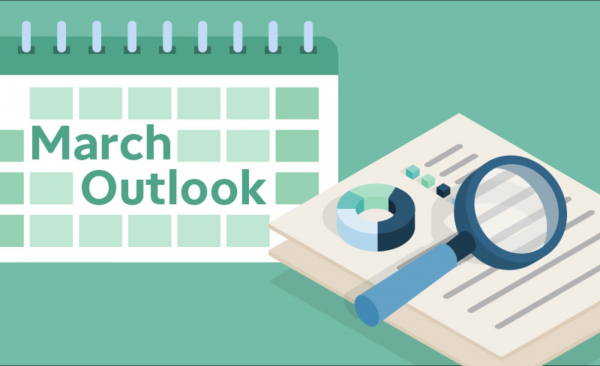 Rising yields have clipped the booming Tech market, but cyclicals getting a lift

After an icy February, March begins soon with hints of spring in the air. And hints of stimulus.

Heading into the new month, focus turns to Capitol Hill, where Congress is expected to deliver another $1.9 trillion in stimulus (give or take a hundred billion) before the first regular season  baseball batter steps to the plate. After December’s stimulus checks apparently contributed to retail sales surging more than 5% in January, there’s optimism that if a small stimulus helped the economy, maybe a bigger stimulus will help more.

Besides watching the political sausage get made, investors likely will have their eyes on the Fed as it prepares for a mid-month meeting. There’s also vaccine progress, a bunch of company investor days, and even a smattering of earnings despite the main season finishing in February. Key company results to watch in March include Target (TGT), FedEx (FDX), Oracle (ORCL), Zoom Video (ZM), Kohl’s (KSS), Broadcom (AVGO), and Nordstrom (JWN).

As always, keep an eye on data. Especially employment. The last few Labor Department payroll reports have been nothing to write home about. Same with weekly new jobless claims. The Fed says the recent pandemic surge weighed on job creation. The question is whether recent declines in cases might put job growth back on track in the next month or two. Watch for the March 1 ISM manufacturing report, too, to see if the surge in that sector of the economy continued in February.

The Pattern So Far: No Pattern

With the first two months of 2021 nearly behind us, there really hasn’t been a firm pattern established in the stock market. Tech rallied then wobbled, with Apple (AAPL) and Tesla (TSLA) looking like punching bags soon after hitting all-time highs. Sometimes it feels like there’s a shift from growth to value, or toward the so-called “reopening” stocks in Energy, Financials, and Industrials, but that can depend on what day it is. The major indices are up about 2% year-to-date as of late February, but well off their 2021 highs.

Still, fixed income and commodities continue to point toward economic resurgence, and so does strength in sectors like Energy that got beaten down most of last year. Virus cases around the world began falling in February, vaccinations climbed, and investors kept looking for new places beyond the highly-valued stock market to put their money. Bitcoin continues to climb, hitting new highs above $52,000 in late February.

At the end of the day, rates are still historically low and there’s a lot of money floating around looking for a home. As much as $5 trillion sits in money market funds, mainly gathering dust, according to one recent media report.

Speaking of rates, one of February’s themes that might spill over into March is some sector rotation as higher bond yields weigh on the big Tech stocks that carried things through the recent rally. Strong readings on January retail sales, industrial production, and the producer price index—all released recently—gave the yield rally another lift, and higher rates are often considered a weight on Tech and other growth stocks. Remember back in late 2018 how the Tech market took a pounding after yields reached multi-year highs.

Why Tech? Because the expected cash flows of companies are considered less valuable when yields are higher. That poses a threat to many Tech stocks because much of their earnings are expected to come further in the future. 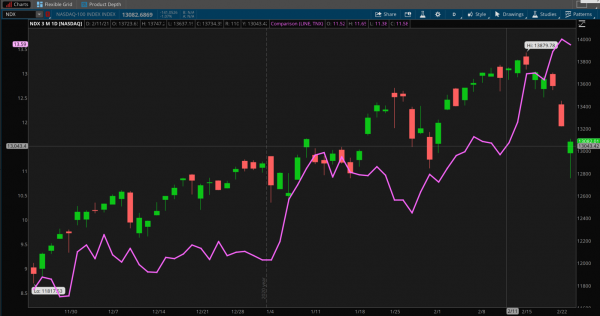 FIGURE 1: HERE’S THE STORY. The Nasdaq 100 (NDX—candlestick) reached new highs earlier this year, but then took a dive as the 10-year Treasury yield (TNX—purple line) started to gain momentum. Data sources: Cboe, Nasdaq. Chart source: The thinkorswim® platform. For illustrative purposes only. Past performance does not guarantee future results.

Here are a few data releases and events to watch for in March:

We’re nowhere near historically high yields now, of course. The 10-year yield topped 3% as recently as 2018 and 5% back in 2007. The current yield between 1.3% and 1.4% would have been an all-time low before last year, but it’s the momentum of the climb that may be causing worries for growth stock investors. The 10-year yield has gone up around 40 basis points since the start of this year, a pace you don’t often see. And the yield curve, which is the difference between the 10-year yield and the two-year yield, is the highest since 2017.

One way to look at that could be that there’s never been a time quite like this, with the economy emerging from a self-induced (well, pandemic-induced) recession. It wasn’t a normal recession where demand began to flag or the financial markets got out of whack. Instead, we brought it on ourselves by shutting down the world economy. That, followed by central banks around the world immediately dropping rates to zero and scooping up bonds to push yields down, caused the record low interest rates.

Now if the pandemic truly is starting to retreat, it’s hard to find natural reasons for rates to be this low (aside from the fact that unemployment remains a major problem in the wake of the recession and may not be able to claw back as quickly as the overall economy). On the other hand, the Fed has said it has no plans to stop its $120 billion a month bond purchase program anytime soon, and forecasts the next rate rise not in terms of months, but years. This could ultimately put a brake on the yield rally, but we’ll have to wait and see.

Which brings us to Fed policy. The next Federal Open Market Committee approaches March 16-17, and the market doesn’t expect any change in rates. However, looking farther ahead, there’s a slight stir in what for the last year has been a very dull rate outlook. The Fed funds rate has been sitting at the 0–0.25% target range since the early days of the pandemic, with little sign that it’s headed anywhere anytime soon.

The Fed funds futures market is starting to show signs of life. As of late February, CME Group’s FedWatch tool was pricing in an 8% chance of a rate hike by June. While that’s not a material likelihood, it’s what we often see as rate sentiment begins to change. A few weeks ago, the futures markets were pricing in a zero percent likelihood of any rate moves in 2021.

It’s 90% or more certain right now that rates will remain at the equivalent of zero, based on futures market expectations. That doesn’t mean the Fed’s out of bullets. If the central bank has any concerns about overheating, it could very possibly signal that by suggesting it’s considering a slowdown in bond purchases. The Fed doesn’t have to actually pinpoint a time or date, only to say it’s on the radar, and that would likely slow the stock market. Fear of exactly that might be playing into the market’s late-February struggles.

Having said that, it seems very unlikely the Fed would do anything that dramatic at its March meeting, considering the pandemic still has so much of the country pinned down. The recent weather may also have taken a toll on economic growth and vaccine distribution. Fed Chairman Jerome Powell, in comments to Congress in late February, didn’t hint at any change in the central bank’s dovish strategy. The Fed meeting is still two weeks away, so we’ll see if anything looks different by then.

Vaccinations might be a good way to monitor the economy’s chances of reflowering this spring, so to speak. About 63 million vaccine doses had been injected as of late February, reaching 13% of Americans, the Associated Press reported, and the pace is about to quicken. About 145 million doses were set for delivery in the next five and a half weeks, the AP reported Feb. 22, with an additional 200 million by the end of May and another 200 million by the end of July.

Those numbers don’t even include any contribution from Johnson & Johnson (JNJ), which could get approval of its single-dose vaccine sometime in March. That approval, if it comes, could inject some optimism on Wall Street.

Right now, it feels like the stock market could use that optimism. Though the major indices remain near all-time highs, late February saw struggles emerge. We’ve already talked about one reason why, which is higher yields dragging on Tech stocks.

The higher yields could be weighing in other ways, too. They could have investors worried about rising borrowing costs for consumers that could put a brake on any recovery from the recession. Or people might be worried about higher yields attracting investors to fixed income, where yields are still low but now more competitive with yields in some of the so-called “bond proxy” sectors like Utilities and Staples.

That move toward fixed income or other places (like bitcoin) could be why Tech struggled to end February. There might also be a little profit-taking going on, too. It doesn’t mean necessarily that people are going into higher-yield investments, only that they’re seeing other areas of the market they may want to go into after a great couple-year run.

Remember, we’ve been here before. The Nasdaq 100 (NDX), which is dominated by the biggest Tech companies, had a rough September and October before picking up steam as the holidays approached. Tech sometimes has these kinds of stretches where things get out of whack, but recent Tech downturns haven’t lasted too long.

No one’s gotten rich fading Tech the last two years, but we were recently at all-time highs and they’ve had an incredible run. You have to step back now and then.