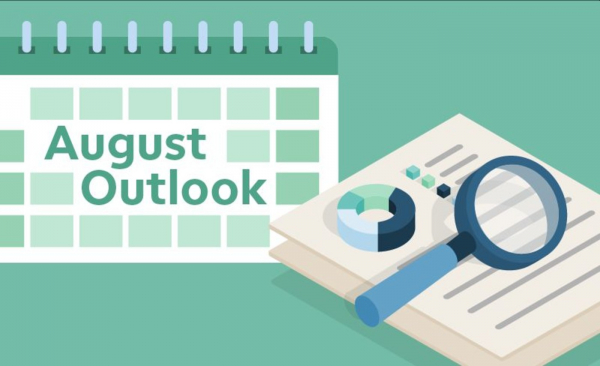 Watching for possible progress on infrastructure bill in Washington

Sometimes it seems like the Fed’s the centerpiece for investors every month, like a big turkey on Thanksgiving. Everything else tends to get a bit overlooked, like the candied yams your aunt brings every year that just receive a polite taste.

That’s not necessarily the case going into August. The Fed takes its show on the road to Wyoming at the end of the month, but before then investors have a lot of flavorful side dishes to try out. Earnings season isn’t even half over as August begins, but it’s off to a strong start and the question is whether things keep rolling along smoothly. Then there’s the political show on Capitol Hill, where Congress and the White House appear to be slowly creaking along toward what finally may be an infrastructure bill. Back-to-school season is another August trend to watch.

August often brings a slower trading pace, especially by mid-month once the biggest chunk of earnings fly by. That could mean a “dog days” type of atmosphere with less volatility. Still, there’s some seasonal tendency toward weaker stock markets, at least from a historical perspective, heading into September. That’s something to keep an eye on, especially when you consider that inflation and stock valuations both remain concerns.

Lately, every month seems to feature one or two shaky days where the long post-pandemic rally briefly stumbles. The S&P 500 Index (SPX) then falls below the 50-day moving average before getting on track again and making new highs.

While past isn’t precedent, investors need to be wary about letting emotions associated with a quick drop get in the way of their long-term plans. Because at least year-to-date, people who sold on these downturns possibly lived to regret it. The key is whether that 50-day moving average for the SPX, now near 4255, can continue acting like a net on any plunge. If the SPX does fall below that and remain on the mat for a few days, maybe the upward momentum could suffer a blow. 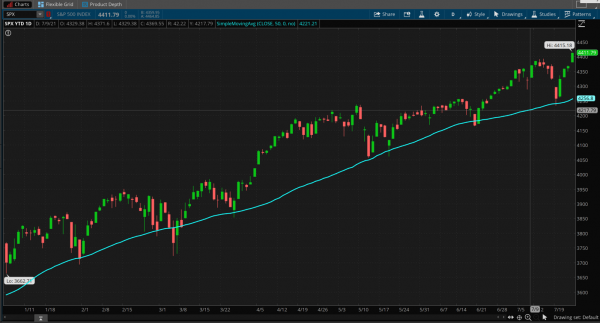 FIGURE 1: WORKING WITH A NET? The S&P 500 Index (SPX—candlestick) has tested and then bounced off its 50-day moving average (blue line) a number of times this year. Can the trend continue in August? Data Source: S&P Dow Jones Indices. Chart source: The thinkorswim® platform. For illustrative purposes only. Past performance does not guarantee future results.

Earnings Extravaganza Extended Into Another Month

Following the Fed’s end-of-July meeting, investors can get back to earnings. The Fed is a key component, but in the long run, earnings drive the markets. As of late July, the Q2 earnings season has been everything analysts said it would be and more.

A sizzling start to earnings season basically helped lift all boats in late July after a slight hiccup on July 19 when the SPX fell 2%, apparently sparked by fears of the Delta variant of COVID-19. Delta remains a concern heading into August, and signs of it spreading further or more states and countries reimposing restrictions on the things that get people out and about should be eyed carefully.

The market has no control over this, of course, but it’s possible if the situation worsens it could mean people heading back toward the supposed “defensive” realm of fixed income, mega-cap Tech stocks, and the dollar. No guarantees, but that’s how things have generally gone so far during COVID-19.

Getting back to earnings, a broad range of firms from the big banks to Snap (SNAP) to IBM (IBM) to Honeywell (HON), AT&T (T), and American Express (AXP) reporting in July appeared to be in pretty good shape, and so did the airlines and railroads. There’s a school of thought that suggests if railroads are doing well, so is the broader economy. Transports can often be a good barometer of overall demand.

Through July 23, 24% of the companies in the S&P 500 had reported results for Q2. Of these, 88% reported EPS above consensus estimates, FactSet said. That compares to the five-year average of 75%.

Here are a few data releases and events to watch for in August.

Check out these upcoming webcasts.

Earnings estimates for the quarter as a whole are on their way up, too, with FactSet now estimating Q2 earnings growth of 74.2%, compared with its previous estimate of 69.4%. Positive earnings surprises reported by companies in multiple sectors (led by the Financials, Health Care, Information Technology, and Communication Services sectors) led to improvement in the overall earnings estimate over the past week, FactSet said.

If there’s a soft spot so far, it’s arguably in the semiconductor area. Both Intel (INTC) and Texas Instruments (TXN) failed to impress investors with their outlooks, and shares of both are playing defense.

As earnings roll along, keep in mind that with earnings expectations so high in general, it probably takes a really big beat for a company to impress. That could help explain why the bank stocks didn’t initially get a huge bump from strong results in mid-July. Investors had arguably built strong earnings into prices, and some may have taken profit when the news actually hit. We could see more of this going forward, especially with the mega-cap Tech companies having recently reached new all-time highs. Guidance, more than what happened in Q2, continues to be the focus.

Having said all that, a look at S&P 500 earnings to date shows the vast majority of companies not just matching high expectations, but exceeding them. For instance, of the 23 companies that reported one morning in late July, 20 came in with earnings per share that beat the Street’s average estimate, and 19 surpassed analysts’ revenue projections.

All this probably helped play into the recovery from that July 19 selloff. It’s been a pretty amazing rebound, really. That “buy-the-dip” mentality has played well. It’s like a football coach that runs the same play that keeps working. You might argue there’s no reason to change that play. It’s certainly working again.

The “Fed put” also seems to remain in place. That’s a term coined decades ago by traders who got the idea that the Fed would step in to support stocks in any downturn. Fed Chairman Jerome Powell said nothing immediately after the July 19 plunge, but perhaps he didn’t have to. Earlier this month he told Congress the Fed remains committed to its easy money policy, and that elevated inflation is likely to cool off.

None of that sounds particularly hawkish, and may have contributed to the decline in bond yields since he spoke. Will yields get back on an upward path in August or head down for another test of recent five-month lows under 1.2%? That’s a key question for the month ahead. Lower yields tend to help the so-called “growth” sectors like Technology, while rising yields can often assist “cyclical” sectors like Financials and Energy. The growth vs. value tug-of-war that’s continued all year doesn’t show signs of vanishing.

Westward Ho for the Fed

After the late-July Fed meeting, central bank watchers start to turn their attention west in August. Not necessarily to the Sturgis Motorcycle Rally, but a little farther west out toward the Grand Tetons where the Fed holds its annual symposium (Covid-permitting) Aug. 26-28.

Earlier this year, a lot of thought on Wall Street centered on Jackson Hole maybe being the time and place for the Fed to announce its long-awaited stimulus tapering. That’s not necessarily the case now. A steady drop in Treasury yields since late March appears to give the Fed a little more room to maneuver as far as keeping its $120 billion a month bond purchase program going. That’s a tactic the Fed uses to inject liquidity and keep rates low, and it seems to have worked. The economy grew more than 6% in Q1 (though you can’t give the Fed all the credit, obviously) and the 10-year Treasury yield stood near 1.3% as of late July. That’s an amazingly low yield considering the economic growth and the steady specter of high inflation readings month after month.

Both Powell and President Biden said in late July that the current elevated inflation won’t last, and the market seems to be buying what they’re selling. For now, anyway. It’s pretty certain most people in the markets will keep a close eye on July consumer and producer prices when they get released in August, and also on the July payrolls report due Aug. 6. Job growth popped back in June after a couple of weaker than expected months. Now the focus might turn more toward wage growth. If employers have to start raising wages sharply to attract reluctant workers, that could also work itself into inflation fears.

By the time Jackson Hole approaches, investors could have a better sense of whether the Fed is ready to move, or at least forecast a move regarding stimulus. Some economists and politicians (and Fed officials themselves) have pointed toward the Fed’s continued purchase of mortgage-backed securities, saying this provides unnecessary ammunition to an already hot housing market. We’ll have to see what the Fed has to say from up in the peaks.

Around the same time the Fed meditates in the mountains, kids all over the country will swing backpacks over their shoulders and head back to school for what’s hopefully a full year of normal classes. That means it’s time to think of the retail sector and how “back-to-school” shopping might shape up. A recent Deloitte report said back-to-school sales will hit $32.5 billion, the highest in at least five years. Part of that could represent pent-up-demand after many kids were home last year due to the pandemic.

While “back-to-school” may conjure up visions of kids and their parents combing through Walmarts (WMT) and Targets (TGT) seeking Trapper Keepers, there’s also electronic equipment to consider. Schools and families could be in the market for up-to-date technology as the school year approaches, so that trail may lead to some key Tech companies providing hardware including Apple (AAPL), Lenovo (LNVGY), Dell Technologies (DELL), and HP (HPQ).

Boxed In: Major Retailers Get Ready to Report

Before school starts, the second half of earnings season looms. Some of that includes the retail sector, including expected reports from WMT and TGT along with additional big-box stores like Lowe’s  (LOW) and Home Depot (HD). Other key August earnings reports to watch include Clorox (CLX), Lyft (LYFT), Uber (UBER), Walt Disney (DIS), Kohl’s (KSS), Cisco (CSCO), Nvidia (NVDA), and Deere (DE), among many others. Try to say that all without stopping for breath.

Maybe August could offer investors time for a breath, if you will, after all the craziness so far this year and last. Traditionally, it’s when volatility and trading tend to decline as many participants head for vacation. That flow got interrupted a bit last year, but perhaps if COVID-19 fears don’t keep growing, there could be a more normal vacation schedule. If that happens and the news flow quiets, the Cboe Volatility Index (VIX) might receive more attention. It popped above 20 briefly in mid-July and then settled back toward 17 again, where it was earlier in the month. VIX has historically averaged around 20, but levels well below that tend to show people expect less turbulence ahead.

If there’s anything that could potentially bring August turbulence besides possible weak earnings or higher inflation, it might be worries about China’s continued regulatory crackdown. The latest regulatory action from Beijing targeted the education field as the country tried to clamp down on tutoring programs. Some of the biggest Tech firms there have a hand in this area, so stay tuned.

Another potential source of outside stress (or strength) is the long-awaited infrastructure deal in Congress. Something appeared to be brewing in late July, perhaps helping the Industrial sector. An unhappy ending to any bipartisan cooperation there could lead to “infrastructure weak” instead of “infrastructure week” on Wall Street. Let’s hope for the best, and perhaps investors won’t be stuck with the yams instead of the turkey.