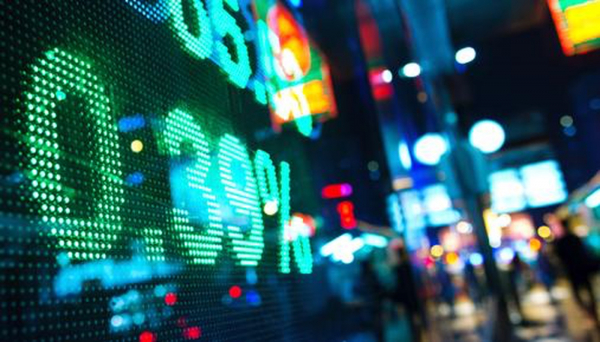 Broader markets lower ahead of the open

Editor’s note: JJ Kinahan is out today. Shawn Cruz, Senior Market Strategist, will be filling in.

(Friday Market Open) Whether you’re running for the gold medal in Tokyo or running for honor in the three-legged race at the summer barbecue, it’s no fun to stumble at the finish.

After a slew of earnings reports, economic releases, and a Fed meeting, the end of the week—and month—was in sight. But if the overnight weakness carries over into the trading day, it could be a weak finish to what had been a strong month.

One catalyst has been yesterday’s earnings report from Amazon (AMZN), which were solid, but not the full-on blowout the street was expecting. Although earnings beat estimates, it was the missed revenue expectations and downside Q3 guidance that sent shares lower in aftermarket trading. AMZN’s stock price fell as low as about 7% after the close.

Futures on the major indices fell in overnight trading, with the tech-centric Nasdaq-100 (/NQ) taking the biggest hit, down well over 1% at one point. Equity index futures are lower ahead of the open with the Nasdaq 100 Index (NDX) set to open down about 1.2%. Apple (AAPL), Alphabet (GOOGL), Tesla (TSLA), Facebook (FB), and Nvidia (NVDA), which have a high weighting in the NDX and other indices, are all set to open lower. With index weakness—plus a 10-year yield back below 1.25% and a pop in the Cboe Volatility Index (VIX) approaching 20, it’s looking like a “risk-off” start to the day.

The five FAANGs earnings may be out of the way but there’s a lot more coming up. Earnings continue to roll in next week, too, but the huge crush of big-Tech reports is out of the way. Some of the key ones to consider watching include Uber (UBER), Lyft (LYFT), Kraft Heinz (KHC), Hyatt Hotels (H), Activision Blizzard (ATVI), Alibaba (BABA), and Marriott (MAR).

There’s plenty of data on the calendar, too. None arguably more important than what’s on the schedule a week from today when investors get a look at the July payrolls report.

As Fed Chairman Jerome Powell said earlier this week, the jobs picture is improving but is far from being all the way back from Covid. Last month’s 5.9% unemployment rate actually ticked a bit higher from May, to 5.9% from 5.8%. Jobs growth in June was very strong at 850,000, but economic bulls would probably like to see a couple of strong reports strung together. Data have been kind of lumpy so far this year.

We’ll look at analysts’ outlook for job and wage growth next week. Besides that key report, other important numbers to watch include Monday’s July ISM Manufacturing figure. It was a strong 60.6% the prior month, but that’s diminished from the spring peaks. Any number above 50% indicates expansion. With Q2 gross domestic product (GDP) a little soft, that could elevate the importance of the ISM number for those trying to get a sense of where the economy has been.

Yesterday’s GDP and jobs numbers didn’t seem to hurt the stock markets too much. The Dow Jones Industrial Average ($DJI) and S&P 500 Index (SPX) hit all-time highs and closed slightly lower. It wasn’t too long ago when we were saying how the SPX has bounced off its 50-day moving average in the last several months. The SPX rose 0.4%—approximately 78% of stocks in the index were up yesterday, according to FactSet. And the $DJI was up 0.45% as it continues its upward trend (see chart below). Early indications suggest a slowdown in momentum but we’ll see how that plays out.

Concerns about the Delta variant didn’t seem to hurt the markets either. That said, we’re likely to see boosters become a reality as mask mandates are revisited and companies reconsider opening up their offices. Vaccine manufacturers such as Pfizer (PFE), BioNTech (BNTX), Moderna (MRNA), and Johnson and Johnson (JNJ) are likely to ramp up production in preparation for administering additional doses. Vaccine manufacturers have been strong performers during the pandemic with MRNA getting an additional boost after joining the SPX. Those who are fully vaccinated may need to think about getting a booster shot six to 12 months after their last dose, according to a Barron’s report.

Another sector that saw strength was semiconductors, led mainly by Advanced Micro Devices (AMD), Xilinx (XLNX), and Qualcomm (QCOM). All three reported strong earnings, which is encouraging given the chip shortages we saw earlier this year.

On the Flip Side

While equities continued moving up, the U.S. Dollar Index ($DXY) weakened, falling to below 92, which is where it was about a month ago. Earlier this week we talked about how gold futures were being indecisive but it may have made up its mind and decided to follow the dollar’s cue. Gold futures (/GC) gapped up around 1.7% to over $1830 per troy ounce. /GC hasn’t seen that kind of one-day percentage gain since May. It’s a matter of if this trend will sustain for a while.

Another commodity that shouldn’t be ignored is oil. Crude futures (/CL) rose yesterday, closing at $73.62 per barrel—about a 1.5% rally, but still lower than the high reached earlier this month of $76.39. Lower weekly inventory levels could have helped lift oil prices. Speaking of oil, Chevron (CVX) and Exxon Mobil (XOM) reported earnings today. Both companies reported better than expected earnings and revenues, mainly because of increasing demand for oil. Shares of these oil giants seem to be bucking the early-morning weakness trend, with CVX up about 1.4% and XOM up 0.7% ahead of the open.

Also up in the premarket is consumer products bellwether Procter & Gamble (PG), which handily beat earnings and revenue consensus. PG also announced a November transfer of power, as CEO David Taylor ends his six-year run and hands the reins to COO Jon Moeller. Consistent with guidance from other execs this quarter, PG did warn of rising input costs, which could pressure margins in the coming quarters. 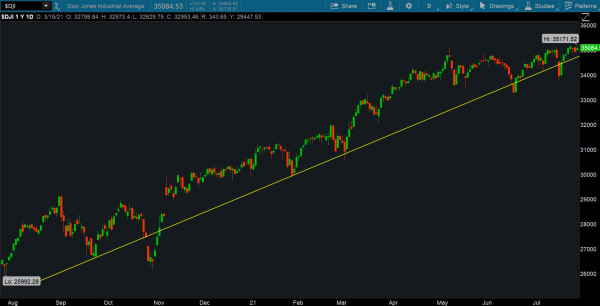 CHART OF THE DAY: DOW’S CHUGGING ALONG. Overall, the Dow Jones Industrial Average ($DJI—candlestick) has been moving along an upward sloping trendline (yellow line) although there were a couple of times (June and July) when it looked like the trend may break. Data source: S&P Dow Jones Indices. Chart source: The thinkorswim® platform. For illustrative purposes only. Past performance does not guarantee future results.

FOMC Nostalgia? With the latest Fed meeting now in the rear-view mirror and no real surprises or changes in policy, it takes a pretty good memory to recall a time when these FOMC meetings had a lot of drama associated with them. That period from late 2015 through late 2018 when the Fed pushed through regular interest rate hikes first under Chair Janet Yellen and then under current Chairman Jerome Powell feels like ages ago. The lack of any real surprises around Fed meetings means markets might be getting a bit complacent, which would be a dangerous place to be if the Fed started to show signs of getting more hawkish. However, Powell has said he’d give plenty of warning before making any changes in policy.

One interesting note in Powell’s press conference Wednesday after the meeting was when a reporter asked the Fed chair to explain what he meant about needing a couple of months to look at more data. The reporter appeared to believe Powell had made a promise about announcing some sort of Fed action after two more months of watching the numbers. Not the case, Powell replied, noting that he hadn’t meant to provide any sort of timetable on possible tapering of stimulus. That’s kind of what passes for drama at Fed meeting conclusions these days.

Busy Signal: Elon Musk, CEO of Tesla (TSLA), made headlines this week when he said he won’t participate in earnings calls with analysts in the future barring some major important announcement. He also drew headlines for mentioning Apple (AAPL) during TSLA’s latest earnings call. It’s not always necessary to have a CEO on an earnings call, per se, but having one there tends to give the call a bit more “gravitas,” if you will, and helps build the company’s relationship with Wall Street analysts.

Remember, analysts can easily help determine the direction of a stock, not only through upgrades, downgrades and price targets, but also in the tone of their notes. Many CEOs try to nurture strong relationships with analysts through regular company meetings as well as lunches and dinners when a CEO is in town. Any CEO who takes that step is potentially losing a prime opportunity to get analysts to understand and respect a company’s vision.

Megaprofits in a Metaverse? Facebook’s (FB) slide from its second-quarter earnings report came amid strong performance in revenue and earnings, both topping analyst estimates. It looks to have been FB’s weak guidance for the second half of 2021 that might have triggered the slide. An interesting moment in the company’s earnings conference call shifted focus toward a next-gen goal that CEO Mark Zuckerberg mentioned 20 times in the call: the creation of a “functional” virtual world within the physical one we live in—in short, a “metaverse.”

Metaverse is a sci-fi term that Zuckerberg describes as “a virtual environment where you can be present with people in digital spaces.” Is it the next-gen evolution of online tech, or the next buzzword to keep investors excited about the company’s longer-term prospects? It can be both. Zuckerberg’s vision to create a digital economy where advertising and commerce can thrive may sound a bit lofty, especially in its nascent stages. But given its potential to significantly disrupt the way we see—and perhaps even live—life itself, the metaverse may be a radical segment to pay attention to as FB continues to invest billions to build it out.