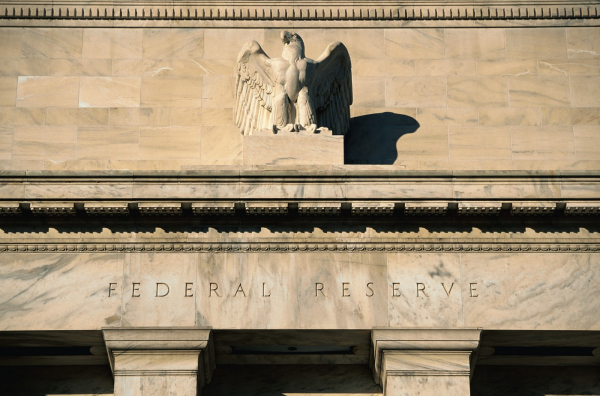 Back in the Green: After Yesterday’s Pause in the Win Streak, Strong Earnings Provide Boost

Powell on tap to speak about labor conditions this afternoon

Lyft (LYFT), Twitter (TWTR), CocaCola (KO), Under Armour (UAA), and Yelp (YELP) all joined the fun last night and this morning, giving the market an early boost after yesterday’s retreat. These companies generally topped analysts’ estimates and, maybe more importantly, shared positive views about their businesses and the economy.  Phrases like “confidence in returning to growth” and “encouraging signs of strength” are good to see in the press releases of reporting companies at times like these.

That doesn’t mean all the news was good, and keep in mind some of the earnings achievements came through cost cutting, not growing the business. Also, Cisco (CSCO) struggled in pre-market trading today despite topping estimates. In this case, it’s a bit like Apple (AAPL) and Microsoft (MSFT) earlier this quarter, with investors punishing the stock because they apparently expected even better. Never mind. The results looked strong and so did the company’s outlook.

We’re not done yet. Uber (UBER) and MGM Resorts (MGM) later today could give us an inside view at how the economy is emerging from COVID-19. MGM shares have been on a roll lately, maybe on hopes of things returning to normal and more people booking vacations.

In a sign that maybe some of the risk-on sentiment remains, Treasury yields popped back up this morning after a two-day retreat. The question is whether the 10-year yield can claw above 1.2% and stay there, something that it hasn’t achieved in this rally.

Fed Chairman Jerome Powell takes the mic at 2 p.m. ET today when he makes a speech called, “State of the U.S. Labor Market.” It’s part of a webinar put on by the Economic Club of New York.

While the topic means it’s unlikely Powell will discuss interest rates, maybe he’ll provide more detail on some of the remarks he made at the January Fed meeting. That’s when he said the “pace of the labor market has slowed in recent months.” It could be a chance to hear him talk more about why that’s the case and how quickly he thinks the situation could reverse.

Obviously, a lot of that is beyond the Fed’s control—mainly because the virus, its variants, and the pace of vaccinations keep making the calls. What could be interesting is if he talks about the developing fiscal stimulus plan and its possible effects on labor. It’s unclear if he’ll take questions, but if there is a Q&A it’s possible someone might ask him about the Democrats’ proposal to raise the minimum wage and what impact he thinks that might have. No guarantee there, of course.

There’s no rule saying the market has to be exciting every day. Which is good, because yesterday was one of those forgettable sessions where things just didn’t happen. It felt like some consolidation took place ahead of today’s inflation data and Powell’s speech.

At the same time, profit-taking pressure hasn’t shown up in a big way, which might reflect people being reluctant to exit too many long positions amid all the optimism around stimulus, vaccination, and improved earnings. That  old saying, “Don’t fight the Fed” could also be playing a role.

Still, the six-day win streak for the S&P 500 Index (SPX) didn’t extend to a lucky seven on Tuesday, which may disappoint people who watch stuff like that. There may be a little fatigue developing at these high levels, and there haven’t been a lot of exciting new catalysts this week to entice more buyers.

That being said, the market has been pricing in the reopening optimism, and in the short term that may be able to keep us grinding higher. What’s a bit worrisome is whether the reality of the economy can live up to the expectations. The expectations are just so high that you wonder when we get there, what’s next.

That could be the feeling that led to some retreat yesterday in reopening stocks, including a bunch of the airlines, cruise lines, and casinos that had been helping things rally. The airline rally appears to be based on hopes for summer travel to pick up, because there’s not much travel at the moment. The Transportation Safety Administration (TSA) daily U.S. checkpoint data shows average airport passenger flow is still well under half of where it was a year ago before the pandemic. That holiday surge just didn’t last.

Taking a Lyft Ahead of Uber Earnings

LYFT got the ride-sharing segment off to a nice start yesterday, even though it still posted a big net loss for 2020. Average revenue per rider hit a record high, and the company reiterated that it expects to have a profitable quarter on an adjusted basis by the end of this year. Shares rose double-digits in the pre-market hours.

Later today the focus turns to UBER, which has been able to make a little hay during the pandemic with its food delivery business. No surprise there, really, with so many people ordering in.

Inflation Data, and a Look Ahead

Until this morning, there hadn’t been much data this week. That changed with the January Consumer Price Index (CPI) being released. Not much drama there, with a 0.3% rise right in line with expectations and down just a bit from 0.4% in December. Core CPI actually came in flat, compared with analysts’ average estimate for 0.2%. If Powell talks about inflation in his speech today, this report doesn’t provide much hope of getting back to the Fed’s 2% target anytime soon.

The rest of the week has plenty of earnings action but not much data. One worry is that stock prices may be getting a bit ahead of the economy. Recent data have been all over the map, but don’t all point upward. For every positive report (ISM manufacturing) there seems to be another data point you can say was negative (January employment). 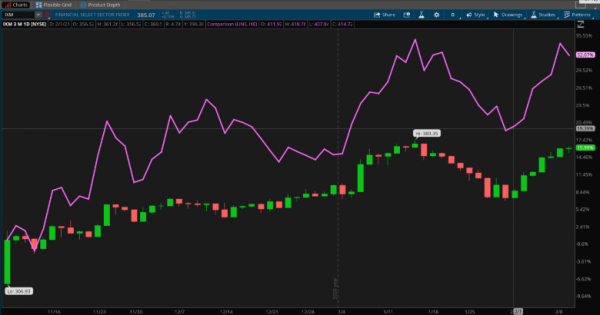 CHART OF THE DAY: SECTOR RENEWAL. The Financial (IXM—candlestick) and Energy (IXE—purple line) sectors had underperformed the broader market for months before catching some bids starting back in November, as this three-month chart shows. Analysts say both sectors have continued to see positive asset flow recently, though Tuesday was a tough day for Energy. Data Source: S&P Dow Jones Indices. Chart source: The thinkorswim® platform from TD Ameritrade. For illustrative purposes only. Past performance does not guarantee future results.

Disney vs. Other Streamers: Tomorrow afternoon brings fiscal Q1 earnings from Disney (DIS), and the Disney+ streaming business is squarely in the spotlight. With only one birthday under its belt, Disney+ was reaching 86.8 million subscribers as of Dec. 2, the company reported at its investor day. That was up nearly 20% from the 73 million subscriber base as of the end of its fiscal Q4. Analysts will likely be listening tomorrow or fresh numbers, and comparing the trajectory to internal forecasts that see the base tripling by 2024—to a jaw-dropping level of between 230 million and 260 million subscribers. DIS executives have also said they plan to up the price a buck to $7.99 per month.

Though Netflix (NFLX) is arguably the king of streaming services that DIS hopes to dethrone, there are plenty vying for a place in the palace: DIS’ Hulu and ESPN+, Apple’s (AAPL) Apple+, Amazon (AMZN) Prime Video, Peacock, part of the Comcast (CMCSA) family and AT&T’s (T) HBO Max.

Tracking Claims: No single data point is a trend, but how about three? That’s how many weeks in a row new weekly jobless claims have dropped going into tomorrow morning’s weekly jobless claims report. They hit 927,000 a few weeks ago, and then descended the stairway to 875,000, 812,000, and finally last week’s 779,000. These aren’t good numbers by any stretch of the imagination. Before the pandemic, they typically stayed below 300,000. Last week’s January jobs report wasn’t too pretty, either. Still, there are some “green shoots” here a month before nature provides any actual ones across much of the country.

First of all, obviously, is the weekly new claims trend. Let’s hope that extends further. Then yesterday’s December Job Openings and Labor Turnover Survey (JOLTS) from the Labor Department showed the “quit” level staying steady and layoffs decreasing. Some economists watch the number of workers who quit their jobs for insight into how the economy is performing. People don’t tend to quit if they don’t think they can find something new, so a higher quit rate—if it happens—could be a good sign. Watch that one in months to come. Another possible good sign in an otherwise disappointing jobs report last week: Hours worked rose, with manufacturing seeing a nice bump. More hours worked per employee often signals that companies see demand for their products and might soon look to expand the workforce.

Shades of 2019 for Earnings: We’re nearly two-thirds of the way through earnings season and it looks like Q4 will be the first quarter since Q4 2019 to see year-over-year earnings growth. That’s according to FactSet research. The 1.7% S&P 500 earnings growth so far this quarter may not sound like much, that is until you compare it with early analyst estimates for a decline of 9% or more, which we were hearing a month or two ago. More companies have beaten analysts’ earnings estimates and by a wider margin, FactSet noted. One interesting note: If it weren’t for Boeing’s (BA) negative earnings surprise, total S&P 500 earnings in Q4 would be up 3.8% instead of 1.7%. Amazing the difference one company can make.

What’s next after this week on the earnings calendar? We still have to wade through a lot of retail companies, including some of the biggest like Home Depot (HD), Target (TGT), Lowe’s (LOW), and Walmart (WMT). How these companies did during the holiday shopping season could play a big role in whether earnings for the quarter stay in positive territory. Tomorrow we’ll talk about what this earnings turnaround might mean for 2021 earnings, and whether analysts might start raising their outlooks.