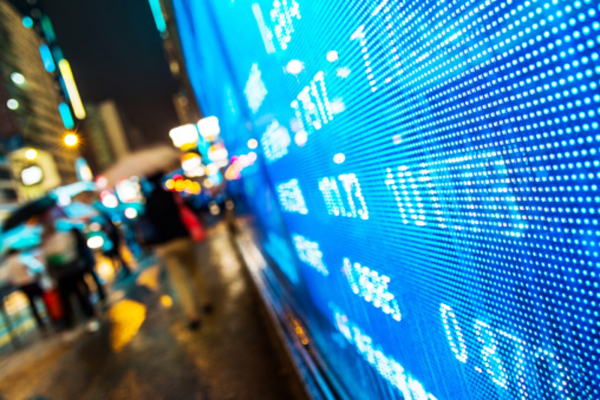 Seventh Heaven in Jeopardy: 6-Day Win Streak on the Line Amid Early Pressure

The RUT is way ahead of everyone else, up 16% so far this year as investors appear focused on smaller, more domestically-oriented stocks and banks that are well represented in the index and tend to benefit from economic stimulus.

The last time the SPX started off a month as well as this was last August when it had six straight gains before faltering on day seven. Today is the seventh trading session of February, so we’ll see if the index can muster a little more power to surpass August’s mark. The day begins with major indices trending lower, so it might take a new positive catalyst to turn things around.

Over the last few years, six days is about as long a winning streak as we’ve seen, so it wouldn’t be surprising if a bit of profit taking came into the market today. That kind of action—if it does happen—potentially could be a factor going into the long weekend, with markets shut Monday for Presidents Day. It was interesting to see bonds gain strength yesterday and again this morning, implying maybe a bit of a risk-off move.

Earnings began the week without too many fireworks. That changes today as Cisco (CSCO) and Twitter (TWTR) prepare to report after the close. CSCO is a stock that doesn’t get a lot of attention day-to-day but can be a kind of beacon for the Tech sector because it has its hands in so many different markets and products. This is a company many people watch because it can tell us so much about the economy and business spending trends, especially now as things reopen. TWTR’s call could be interesting for more insight into its recent bans, along with user trends.

Looking ahead to later this week, some of the big names include Uber (UBER), CocaCola (KO) and General Motors (GM), tomorrow and Disney (DIS) on Thursday. Analysts say they’ll be looking for updated numbers on the Disney+ streaming service, as well as the latest on when DIS thinks it may be back to full steam in the theme park and cruise ship businesses based on current global realities. The stock has been on a roll, helped by the company’s investor day back in December that appeared to wow much of Wall Street.

We’ve been in an “earnings recession,” defined by corporate profits posting year-over-year declines for two quarters in a row. That seems to be ending with Q4 earnings, MarketWatch reported. It notes that S&P 500 companies are now projected to show positive earnings growth of 1.7% for Q4, with 58% of results already in. There’s still a ways to go, but the numbers point in the right direction, helped by firm results from the Financial and Tech sectors, according to FactSet research. In the long run, earnings drive the market, so that helps explain what this rally is in response to.

There’s data ahead, too, with the Consumer Price Index (CPI) for January out tomorrow morning. In December, the overall CPI rose 0.4% while the “core” CPI that strips out food and energy rose 0.1%. Analysts expect another 0.4% rise in January overall and 0.2% for the core, Briefing.com said. Those kinds of numbers probably wouldn’t ring too many inflation alarm bells, but with Treasury yields generally rising and energy costs gaining steam, any higher than expected CPI data could draw a raised eyebrow or two.

The new week began like a repeat of the previous one. Cyclical sectors like Energy and Financials, along with small-caps, kept gaining ground while mega-caps and FAANGs stepped back. The Tech sector wasn’t a complete washout, however. The Philadelphia Semiconductor Index (SOX) gained more than 3%.

Stimulus hopes and a decent earnings season appear to be driving cyclicals higher. It’s good to see more companies sharing guidance, although many are still reluctant to guide for the full year. In general, it doesn’t look like most companies expect earnings to fall apart this year, and it also might have been a boost to sentiment when Exxon Mobil (XOM) decided not to cut its dividend despite all the pain suffered by the Energy sector over the last year.

Retail investors came out of the gate swinging, so to speak, in January.

TD Ameritrade’s Investor Movement Index® (IMXSM) increased to 6.91 in January, up about 10.4% from its December score of 6.26. The IMX is TD Ameritrade’s proprietary, behavior-based index, aggregating Main Street investor positions and activity to measure what investors actually were doing and how they were positioned in the markets.

January was a month dominated by major news stories, from government stimulus to a change of power in D.C. to the start of earnings season. Then it finished with some unparalleled volatility in stocks such as GameStop (GME) and AMC Theatres (AMC). It also arguably marked the first month in almost a year where COVID wasn’t the primary day-to-day story. Investors tracked by the IMX had 10% more exposure to the market in January than in the previous month, the biggest leap in a long time.

As you would suspect, TDA clients traded good amounts of GME and AMC, but a bit more AMC, perhaps because of the lower price point. Because these two stocks only traded heavily in the last week of the month, they didn’t have as big an effect on overall January activity.

Why would vaccine makers PFE and MRNA be on the wrong side of the ledger, shall we say? The reason might be that although the great news on vaccines was a huge step for fighting the pandemic, at the end of the day some investors might have been looking for what kind of catalyst could take them to the next step as their stocks leveled out a bit. 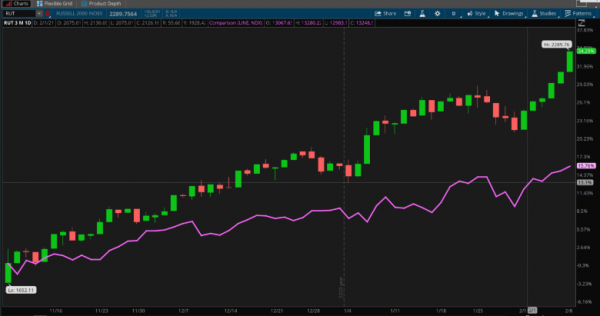 CHART OF THE DAY: DAVID BEATING GOLIATH. Over the last three months, the Nasdaq 100 (NDX—purple line) had a nice run, rising about 16%. But the NDX, which includes many of the so-called “mega-cap” stocks, is way behind the small-cap Russell 2000 (RUT—candlestick) since early November. The RUT is up around 34% during that stretch as investors pile into smaller companies perhaps best situated to benefit from economic stimulus and reopening. Data Sources: Nasdaq, FTSE Russell. Chart source: The thinkorswim® platform from TD Ameritrade. For illustrative purposes only. Past performance does not guarantee future results.

Yield Watch: After hitting 2% for the first time in about a year, 30-year bond yields walked back a bit late Monday. The 10-year yield also retreated after touching a new one-year high of 1.2%. Neither of these numbers is really in thin air (the all-time low 10-year yield before last year was around 1.4%), but the yield rally that’s gaining steam amid talk of a stimulus should probably be in the back of your mind as an investor. Right now, close to 70% of stocks pay a dividend that’s higher than the 10-year Treasury. That percentage is very close to a record high.

However, if rates rise to 1.75%, that proportion drops to 44%, Bank of America strategist Savita Subramanian said in an interview with Barron’s. Many investors are retirees looking for income. It’s not a given that yields can rise back to 1.75% this year (some analysts look for 1.4% to 1.5%), but it’s hard not to argue that as yields rise, fixed income could start looking more attractive than stocks to some investors. The big growth stocks, biotechs, and recent IPOs that don’t tend to pay large (or any) dividends could potentially get hurt in this scenario.

Tesla and Bitcoin, Part 2: We mentioned Tesla’s (TSLA) purchase of $1.5 billion in bitcoin yesterday, and now the question is, what will the company’s biggest shareholders and board members think of this strategy? That’s something we’ll likely learn more about in months to come. If you’re a regular investor, however, the move should make you think a bit about what kind of company you’re investing in when you buy shares of TSLA. For years, people thought of it as a car company. Then many thought of it as a battery play, seeing much of the value not in the cars but in the battery technology they’re built around. The company didn’t put a huge amount of its cash into bitcoin, but enough to potentially give TSLA shareholders a third scenario in trying to assess TSLA’s business.

What TSLA’s Move Could Mean for Bitcoin: One possibility behind the move could be this: If CEO Elon Musk is looking at the future of TSLA as THE global provider of EV batteries and cars, perhaps he’s going to want a robust cross-border payment system, especially considering how digitally focused he is. If Musk ends up being the trend-setter here and other companies pile into bitcoin as a way of telegraphing their commitment to a digital future, that could lead to interesting times ahead for the digital currency. Getting back to TSLA, in the long run, many people who own the stock might say the bitcoin buy is one of the reasons they invest in TSLA and Musk. He sees no better place for return so he finds one in bitcoin and sends it to a new high. In its filing, however, TSLA did acknowledge the bitcoin holding could make its earnings reports more volatile.