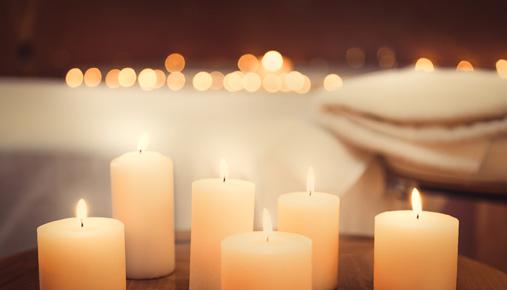 Candlestick charts have been around since at least the 19th century (though some estimate the technique, which was invented by Japanese rice merchants seeking a way to predict price movements, to be much older).

But until 1991, they were all but unknown to those outside Japan. That was when author Steven Nison introduced the concept to Western traders with his book Japanese Candlestick Charting Techniques: A Contemporary Guide to the Ancient Investment Techniques of the Far East. Nowadays, candlesticks are the default form of charting for many traders.

The chart “candles” are made up of two parts: 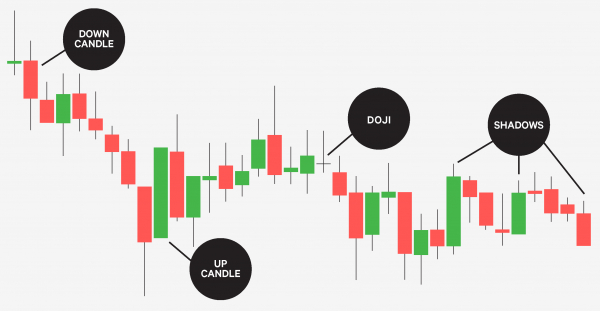 This image shows up (green) and down (red) candles, as well as an unchanged “doji” candle. The “shadows” are the vertical lines above and below the candles’ real bodies. Image source: The thinkorswim® platform from TD Ameritrade. For illustrative purposes only.

Thanks to their unique presentation, candlestick chart patterns are readily visible. The patterns are generally described in two categories:

Reversal patterns. When the direction of a prevailing trend changes from an uptrend (marked by a series of higher highs and higher lows) to a downtrend (marked by a series of lower highs and lower lows), or vice versa, it’s known as a trend reversal. Reversal patterns include the doji, reversal hammer, bullish engulfing reversal, and the morning star reversal. Continuation patterns. Sometimes there’s a pause in a market trend—the market might chop in a range for a while before continuing the trend. Candlestick chart watchers may look for patterns that could signal the prevailing trend is about to resume. These are called continuation patterns, and include names such as separating lines, gap three methods, and on neck.

Patterns can be bullish or bearish, and can consist of a single candle or a group of candles. These patterns can be identified in any time frame—hourly, daily, weekly, monthly—and any asset class—stocks, commodities, currencies, and so on. A full rundown of bullish and bearish candlestick patterns can be found in the thinkorswim® Learning Center.

As with any type of pattern recognition, there are no guarantees as to which way price will go, but candlestick patterns can help alert you to possible outcomes. The thinkorswim platform allows you to scan automatically for traditional candlestick patterns, or create your own using the candlestick pattern editor. And when you create a custom pattern, you get to choose the custom name.