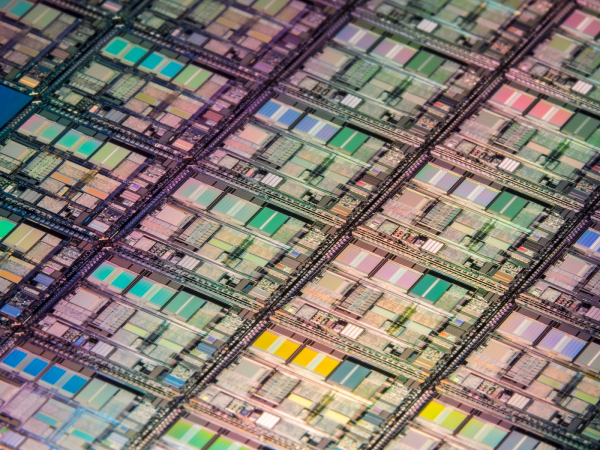 Demand might still be an issue, and the Huawei controversy continues to hover

If you’re looking for a sector that arguably serves as the number-one barometer of U.S./China trade relations, semiconductors could be a contender.

As trade talks get underway this week after a nearly three-month break, the PHLX Semiconductor Index (SOX) charged ahead. It surpassed the 2019 highs set back in April, and now is up a remarkable 31% from the May 29 intraday low set after U.S. and China negotiations froze earlier that month. The S&P 500 (SPX), by comparison, is up “just” 8% since May 29.

The SOX had fallen 20% between mid-April and late May following the breakdown of talks, so once again, investors got reminded just how volatile these stocks can be. It’s not a corner of the market where you can necessarily “set and forget” your trades. Anyone investing in this sector should consider exactly what they’re getting into, because the road ahead could still have some bumps. China is only one reason. There are also continued concerns about world economic growth slowing and worries about excess supplies of some types of chips.

Chipping Away at Various Issues

Over the last two years, the rug keeps getting pulled out from under the sector. Every time things look like they’re going well, another shoe drops. In May, it was the China talks breaking down, but there have been other issues, too.

Earlier this year, semis got hurt by a drop in cryptocurrency prices, which reduced demand for so-called “bitcoin mining” that requires semiconductor firms to make fast processors to run advanced algorithms. Then there was a slowdown in video game demand. Also, many companies in the sector put out so-so expectations for 2019, though guidance varied more by the individual company than in the past.

It’s uncertain whether the summer rally in chipmaker stocks means the sector has turned a corner fundamentally, because there still seem to be a few challenges. Demand remains an open question, and China’s economy recently had its slowest quarterly growth in 27 years.

On the other hand, one could argue there’s good reason well beyond China talks for optimism about the sector. Though chips would likely be the first area to get hit hard if the China tariff situation becomes worse, we know these products are needed. For instance, gamers tend to want the fastest chip.

There’s a certain demand level that’s probably going to be there, whatever happens with China. You need chips for most things tech-related, including popular video games and phones. If chip maker stocks are doing well, it often indicates investor confidence in the broader economy.

Early indications from chip companies that reported earnings for last quarter paint a mixed picture. Texas Instruments (TXN) generally saw its earnings last week get a rousing reception from Wall Street, with some analysts seeing the company’s results as evidence that the excess inventory plaguing the sector might be easing.

Teradyne (TER) shares got a boost last week when it beat analysts’ earnings and revenue expectations and also gave guidance above Street estimates.

“We exceeded our revenue and profit guidance for the second quarter on stronger than expected results in semiconductor test as continued growth in 5G infrastructure, networking and memory test spending more than offset lower demand from automotive and industrial device makers,” said Teradyne President and CEO Mark Jagiela, in a press release.

Things arguably looked a bit less “chipper” over at Intel (INTC). The company beat analysts’ earnings and revenue estimates, which helped shares. However, MarketWatch noted that some analysts expressed worries about the company’s production ramp for its 10-nm Ice Lake Xeon server chip.

In its earnings call, INTC executives spoke of “trade uncertainties,” though one school of thought suggests some of those concerns might have been eased recently by the U.S. decision to allow U.S. companies to deal with Chinese technology company Huawei after earlier blacklisting the firm. The Huawei situation remains tense as trade talks resume, and could continue to temper some of the semiconductor optimism unless the situation gets resolved for the long-term.

This brings us to Advanced Micro Devices (AMD), which reports after Tuesday’s close, and Nvidia (NVDA), which reports in mid-August. These two could put the final major imprint on sector earnings until mid-September, when Micron (MU) is expected to report. 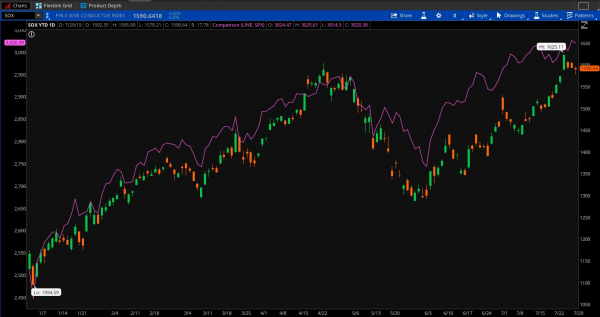 Figure 1: ROLLING WITH THE PUNCHES: After getting slammed in May when trade talks with China broke down, the PHLX Semiconductor Index (candlestick) came charging back to post new highs. It’s far outpacing the S&P 500 Index (purple line) since late May, as this year-to-date chart shows. Data Sources: Philadelphia Stock Exchange, S&P Dow Jones Indices.  Chart source: The thinkorswim® platform from TD Ameritrade. For illustrative purposes only. Past performance does not guarantee future results.

The company expects the sequential increase to be driven by growth across all businesses. The year-over-year decrease is expected to be primarily driven by lower graphics channel sales, negligible blockchain-related GPU revenue and lower semi-custom revenue.

Investors might want to look for potential updates on some of the products mentioned above when AMD holds its analyst call. The other question is whether the company sees improved outlook in the second half for data center sales. A data center is a large group of networked computer servers typically used by organizations for the remote storage, processing, or distribution of large amounts of data.

AMD shares are up 23% since the company reported Q1 earnings.

When AMD releases results, it is expected to report adjusted EPS of $0.08, down from $0.14 in the prior-year quarter, on revenue of $1.52 billion, according to third-party consensus analyst estimates. That revenue would represent a 13.2% drop from a year ago.

Options traders have priced in approximately an 8% stock price move in either direction around the upcoming earnings release, according to the Market Maker Move indicator on the thinkorswim® platform. Implied volatility was at the 30th percentile as of this morning.

Looking at the Aug. 2 weekly option expiration, call activity has been high at the 34, 35 and 36 strikes, while put volume is highest at 33 and 32.

When NVDA last reported, it left investors in the dark about what might happen in the second half. The company beat Street estimates for Q1 fiscal 2020 earnings per share, but didn’t reiterate previous full fiscal-year guidance. It appears that lack of clarity on data center demand might be why NVDA refrained from guiding investors.

“The data center spending pause around the world will likely persist in the second quarter and visibility remains low,” NVDA said on the earnings call.

Revenue from data centers—Nvidia’s second-largest business segment—fell 10% to $634 million in Q1 from a year earlier. That was worse than analysts had expected.

However, NVDA also said the company is “back on an upward trajectory,” and has returned to growth in gaming.

On the Q2 call, it might also be instructive to hear how NVDA executives view things in China, and for any update on the data center business. The analyst community expects NVDA to report on Aug. 15 after the close.

For Q2 of the company’s fiscal 2020, NVDA forecast revenue of $2.55 billion, plus or minus 2%. For fiscal 2020 as a whole, the company had originally forecast revenue flat to down a bit. However, it didn’t reiterate that in its Q1 call or press release, so any update for the second half is likely to get a close look from investors.

When NVDA releases results, it is expected to report adjusted EPS of $1.14, down from $1.94 in the prior-year quarter, on revenue of $2.54 billion, according to third-party consensus analyst estimates. That revenue would represent an 18.5% decline from the same quarter a year ago.