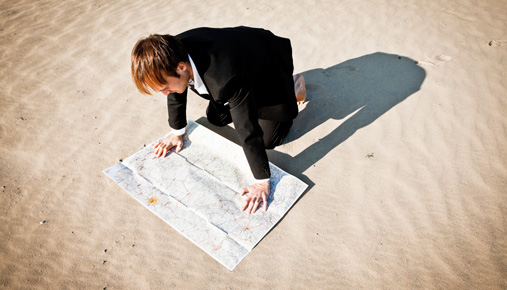 There’s more to reading the economy than sifting through data in the hard-hitting monthly reports that push the Federal Reserve and corporate purchasing managers into action. Analysis of off-the-grid economic indicators is about reading between the lines. After all, the interest-rate-setting Fed looks off-radar too sometimes, such as in its Beige Book report that polls business opinions.

Anecdotal snapshots of behavior can admittedly lack statistical backbone. In fact, that’s the point. This kind of economic “data” collection can be timely, easier to access, more detailed, and cover broader segments of the economy, including the under-counted. And then there’s the off-the-grid economic data crunched by professional economists. One case in point is the Atlanta Federal Reserve’s “real-time” model of the Commerce Department’s gross domestic product (GDP) report.

In the short list of off-the-grid economic indicators below, we lean on the quarterly economic newsletter issued by institutional brokerage and trading services firm Convergex. Its analysts cull used-car sales data, Google searches, firearm ads, and more for a unique look at economic performance as well as consumer and investor sentiment. We’ve also tossed in a few newly minted professional reports that are earning traction among followers, including the Federal Reserve.

Bottom line: You may be best off using a blend of hard and soft economic data to build on those investing hunches. Here are a few places to look.

Google Trends: I Want to Sell …

Convergex likes to check out what billions of people are seeking on Internet search giant Google (GOOG, GOOGL). And you can take a look, too. Check out Google Trends, the search firm’s own ranking of its topic trends.

Convergex, for instance, studies which keywords follow the prompts “I want to sell my …” or “I want to buy …” The results form a loose measure of how desperate the broader population might be feeling to unload valuables—or how spend-happy consumers might be during boom times. Earlier this year, the phrase “I want to sell my laptop” pushed down “I want to sell my kidney” in Google rankings. Sounds a little less desperate? Kidney sales are illegal, by the way, but that doesn’t stop would-be sellers from searching for a match.

Here’s another example. Gold demand is often an economic indicator, right? What can Google tell us?

“Search volumes for gold coins are down … mirroring U.S. Mint data that shows both gold and silver coins sales are slack at the moment,” notes Nicholas Colas, chief market strategist at Convergex and author of its “Off-the-Grid Economic Indicators” quarterly report. Lower search volumes could mean there’s less demand for the relative safety of precious metals usually seen during economic and market uncertainty. You’ll have to decide.

The growth rate of real gross domestic product (GDP) is a key indicator of economic activity, but the official estimate is released with a delay to allow for revisions, data filing delays, and other factors.

Enter the Atlanta branch of our nation’s Federal Reserve system. Its GDPNow forecasting model is constantly updated with new data points to provide what its economists call a “nowcast” of the official estimate that’s released quarterly—and revised each month—by the Commerce Department. Fed economists have long been crunching numbers behind the scenes for the decision-making Federal Open Market Committee, but GDPNow brings that effort to the public.

For instance, once construction spending data hit on July 1, the Atlanta Fed’s model bumped up its running forecast for Q2 real GDP to 2.2% compared to 2.1% on June 25, the day of the most recent input. The Atlanta Fed also compares its result to the forecast produced monthly in the well-known publication Blue Chip Economic Indicators (figure 1).

Janet Yellen and others on the Federal Reserve frequently lean on the relatively new Job Openings and Labor Turnover Survey (JOLTS) for a different view of the labor market. It’s one of several reports that help paint a picture of hiring strength.

The labor turnover report focuses on job availability, along with hiring and separation trends (retirement and so on). What matters most for this report is “voluntary quits,” meaning workers who have the confidence to leave a job for what they believe will be a better one. JOLTS sizes up how confident the whole workforce is before it all shakes out in other monthly data.

Food is one of the volatile components stripped out of some price-change indicators—including the core Consumer Price Index—by those who want a “cleaner” look at inflation’s grip on the economy. But food prices, anecdotally, hit consumers right where it counts. For that reason, Convergex likes to crunch its own Bacon Cheeseburger Inflation Index (using CPI data), breaking out beef, cheese, and bacon. The index reveals that the cost of a bacon cheeseburger is about 3.7% lower than a year ago, a marked change from the 10% increase last year at this time, according to Convergex. So, no inflation there, but is it rearing its ugly head in other grocery store aisles?

The Most Vulnerable: Food Assistance

There’s another reading on food that could play into an investor’s overall view of the economy. Despite the notional recovery of the U.S. economy since 2010, some evidence shows there are nearly as many Americans enrolled in the federal Supplemental Nutrition Assistance Program, or SNAP (once known as food stamps), as before.

The count of 45.6 million men, women, and children collecting these benefits as of March 2015 is little moved from where the reading stood four years ago. The good news is that this number is down from the peak of 47.7 million in June 2013. Of the current enrollees in the SNAP program, 16 million (35% of the total) are children. That number was just under 10 million in 2007.

Says Colas of Convergex: “[It’s] one of the most vivid examples of how stretched many American households remain and a worrisome fact if the U.S. economy experiences an economic shock in the next few years.”

A World of Thinkers

Combine your own economic sleuthing with that of the pros via industry-recognized market and economic analysis.