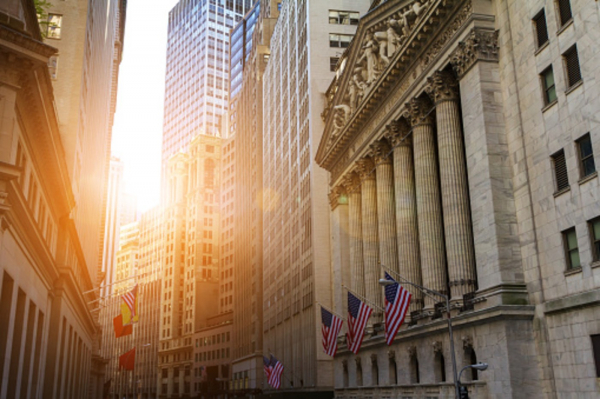 Volatility looks to be elevated going into next quarter

Trade talks between China and U.S. remain a focal point heading into October

(Monday Market Open) Today marks the swan song for the 3rd quarter of 2019, and the stock market looks to be ending right about where it began. For the S&P 500 (SPX) it’s almost to the tick at around 2970. Anyone not watching the day-to-day movement might not know that SPX traded as much as 6% lower and 2% higher at various points in the quarter. The final day of Q3 begins with indices edging higher, after a U.S. Treasury official said there are no current plans to delist Chinese companies from U.S. exchanges—in contrast to a report Friday that the White House has been considering such a move.

Though the major indices are ending the quarter pretty much unchanged, volatility has remained elevated, with the Cboe Volatility Index (VIX) at 17—several notches higher than where it started the quarter. Perhaps the VIX, which measures volatility expectations, is exhibiting a bit of muscle memory regarding the summer whipsawing, but it’s also likely reflecting the amount of lingering uncertainty hanging over the market.

Though there’s still a lot to like about the current state of the economy, it seems every positive element has a “yes, but…” counterargument. Earnings remain solid, but some companies have been dialing back growth expectations, and several recent high-profile IPOs seem to have stumbled out of the gate. The job market continues to be robust, inflation remains muted, and several recent reports show a resilient U.S. consumer. But a consumer sentiment report Friday showed signs of a slowdown. And then there’s the ongoing trade war, which oscillates—sometimes intraday—between progress and setbacks.

The 4th quarter—and the month of October in particular—has historically been volatile. The coming quarter may see its share of volatility. Adding to trade tensions are the ongoing Brexit negotiations, a newly-opened impeachment inquiry, and the threat of war in the Middle East after a recent attack on Saudi oil fields. And let’s not forget—the earnings season bonanza is about to begin, with big banks reporting in a couple weeks. Before then, we have a number of economic releases, including the closely-watched employment report this Friday.

Buckle up; we could be in for quite a ride.

Not a Casual Friday on Wall Street

It might feel like a long time since Friday. Even longer if you think back to Friday morning, when stocks were actually up for a while.

As you might remember, things quickly went south that day on more fretting about U.S./China relations. Specifically, news came out suggesting that the White House is considering limiting U.S. investors’ portfolio flows into China and delisting Chinese companies from U.S. stock exchanges. Investors beat up the market like a rented mule after that, though it’s unclear how serious these proposals are. A subsequent release from the Treasury Department have sought to downplay the idea that placing limits on foreign investment could be the next salvo in the ongoing trade war.

Friday offered more proof of how quickly things can turn when investors cast a fish eye on the latest trade news. Things didn’t get helped either by a weak earnings forecast from Micron (MU) that weighed on that stock, as well as a lot of others in the semiconductor sector. The Philadelphia Semiconductor Index (SOX) dropped more than 2% Friday.

Is the Consumer Still King?

Another bit of bad news Friday was consumer spending starting to slow in August, according to the Commerce Department. Personal-consumption expenditures, or household spending, rose just a seasonally adjusted 0.1% in August. This compared with July’s  0.5% growth, and was the lowest since February.

Consumers have arguably been the main engine keeping the economy chugging along the last few months, and one report doesn’t necessarily change that. Still, if people start getting shy about spending, things could get rougher for the economy. These data potentially could put next month’s retail sales and wages data into more focus as investors try to get insight into spending patterns.

Already, economic and earnings growth haven’t been providing much of a lift for the market, but some analysts had been thinking we could count on strong consumer spending at least through the holidays, even if a trade deal isn’t reached by then. On the plus side, Friday’s other economic numbers looked pretty solid, including durable goods.

More numbers come tomorrow, including auto and truck sales, as well as the ISM Manufacturing Index for September (see more below).

Once again, last week showed how tough it’s gotten for the S&P 500 (SPX) to climb above 3000 and stay there. We’ve been saying for a while that the long-term range of 2800-3000 is likely to keep holding as long as there’s no major progress on trade. On the technical side, it’s worth noting that the SPX fell briefly below its 50-day moving average of 2949 on Friday, Briefing.com pointed out. Sometimes moving averages can represent important support and resistance areas.

Unfortunately, the chatter late last week about China potentially buying more U.S. products arguably falls into the “we’ve heard that before” file. It doesn’t necessarily advance the key issues that the administration has said it wants to address. This was a prime reason last spring’s talks fell through without a resolution. That’s why it’s hard to get too hopeful ahead of the negotiations that start Oct. 10. Still, talks are better than no talks.

It’s a little early to get any earnings excitement stirring, but it’s probably a good idea this week and next to look out for any possible warnings from companies ahead of their reporting dates, which sometimes happens. It’s also a few weeks until the next Fed meeting, but Fed officials are likely to be popping up with speeches here or there. It’s important not to just listen for anything they say about rates, but also for any economic forecasts they make, considering all the trade and political turmoil.

This week’s data are back-weighted, with payrolls on Friday getting most of the spotlight. Last month’s job growth of 130,000 didn’t exactly thrill bullish investors, but it was probably enough to keep unemployment low. Wages also have kind of gotten stuck at 3% growth over most of the year, suggesting that workers aren’t necessarily going to have endless pockets.

They might not need them, if Friday’s inflation numbers are any sign. When Personal Consumption Expenditure (PCE) prices rise just 0.1% month-over-month, it basically tells you inflation is barely on life support. Even with relatively low gas prices factored out, inflation barely budged with 1.8% year-over-year growth. The Fed’s target is 2%, and we’re not there yet. 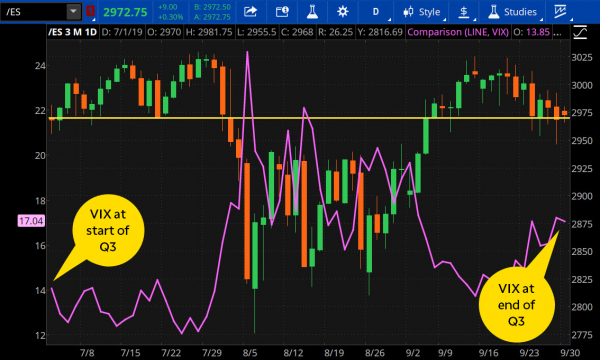 FIGURE 1: NO NET CHANGE, BUT HIGHER VOL. As of Monday morning, the 3rd quarter ends pretty much where it began—2970—for futures on the S&P 500 Index (/ES – candlestick). However, the Cboe Volatility Index (VIX – purple line) starts the day at 17, several notches above where it began the quarter. Image sources: CME Group, Cboe Global Markets. Chart source: The thinkorswim® platform from TD Ameritrade. For illustrative purposes only. Past performance does not guarantee future results.

Monkey in the Middle: As stocks bounced around last week, the bond market tried to find a middle ground. The 10-year Treasury yield finished the old week just below 1.7%, which is right in between recent lows down around 1.5% and recent highs at 1.9%. Meanwhile, the dollar index is slowly but steadily moving higher, staying above 99. It’s been a long time—more than two years—since the dollar index challenged 100, but that could be something to watch for in October if we keep seeing relatively strong U.S. economic data even while overseas data slips.

Pieces of the Puzzle: This week we’ll be watching the ISM Manufacturing Index to get a feel for what might be next for the economy. In August, the ISM didn’t meet expectations, registering at 49.1%—the lowest reading since January 2016. Manufacturing data has been somewhat weak in recent months, raising some concerns, especially in terms of New Export Orders, which dropped to 43.3% from 48.1%. This could further stoke concerns about the tariffs and that’s something we’re keeping an eye on. With so much else going on with the markets right now, this bit of data could help fill in the lines a little more as we color in the bigger picture.

Oil Slick: We’re keeping an eye on crude  to start the week with a bunch of news items out of the Middle East causing prices to ping pong lately. Reports that Saudi Arabia could be talking about a ceasefire with the war in Yemen put some pressure on prices. That comes after the attacks on oil facilities in Saudi Arabia a few weeks ago which initially sent oil prices screaming higher. Those facilities seem to be almost up and running again. There’s also conflicting reports out of Iran and the U.S. about sanctions, which is making prices more volatile. Crude starts the week near recent lows, just above $55 a barrel for U.S. futures.