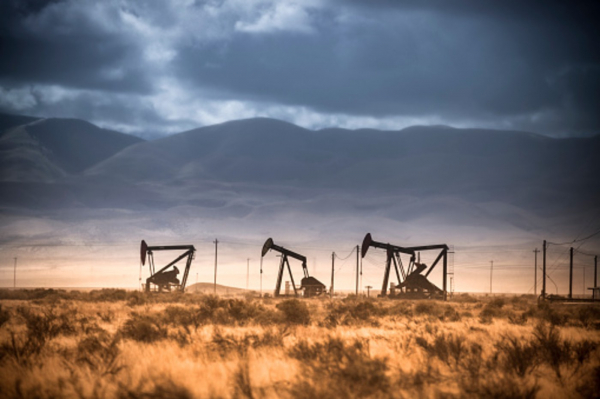 (Tuesday Market Open) To start the week, a key manufacturing index fell to its lowest level since 2009. Precious metals, including gold, silver and particularly palladium, took it on the chin. Crude oil fell 3% to below where it was before the attack on Saudi oil fields.

Despite all that, the stock market rallied Monday, with the S&P 500 Index (SPX) rising 0.5% and the Nasdaq (COMP) advancing 0.75%. It’s also looking like there might be follow-through strength early Tuesday. Also, in a possible sign of “risk-off” trading, bonds are taking a hit.

Though stocks finished Q3 roughly where they started, it was a heck of a ride, with major indices falling as much as 6% and rising as much as 2% above current levels during a turbulent three months. When the dust settled, the SPX and the Dow Jones Industrial Average ($DJI) posted their third-straight quarter of gains. In general, we had an amazing quarter. Considering everything that happened, it’s amazing we ended up where we ended up.

Now we’re in Q4, which is often the most volatile quarter of the year, as Q3 earnings reports and Q4 guidance can give investors their first snapshot of full-year stock performance. Add in an ongoing trade war, geopolitical tensions at home and abroad, an impending Brexit deadline at the end of the month, and a new incoming president of the European Central Bank, and it could be an interesting month.

It might actually be an interesting day to start the month, because besides auto sales giving us another look at consumer health, the schedule also includes four Fed speakers. Meanwhile, across the Atlantic there’s disappointing economic news as the European Purchasing Managers Index (PMI) of 45.7 in September was a seven-year low. Major European stock indices mostly edged lower early Tuesday.

Also overseas, eyes could remain on Hong Kong protests and their possible impact on Asian markets. Generally, though, that situation hasn’t had too much impact on trading here in the U.S.

The earnings calendar is a bit light right now, but tomorrow brings a fresh look at the housing market as home builder Lennar (LEN) is expected to report before Wednesday’s open. Some analysts have sounded more positive about housing stocks recently based on solid home sales data over the last month or two.

Still, if you want a theme for this week, let’s face it. It’s the same as last week and the week before, and it’s called “Listening for news about trade.”

Manufacturing, Auto Sales and the Dollar

As mentioned above, palladium—a key component of catalytic converters for the auto industry—led the metals sector lower yesterday, falling 5%. The rest of the metals complex, including gold and silver, also fell, and crude sank 3% to $54. Meanwhile, the Chicago Purchasing Managers’ Index (PMI) fell to 47.1, well below Wall Street consensus of 50.8 as compiled by Briefing.com. It was the lowest reading since 2009.

There’s more data ahead. We’ll get a fresh look at auto and truck sales this afternoon, but expectations are low. On Friday, a J.D. Power/LMC Automotive forecast pegged September auto sales down 13% from a year ago.

Trade policy aside, what’s one possible common denominator playing into weakness in manufacturing, metal and energy prices? It could be the U. S. dollar (see figure 1 below). As the dollar flirts with the 100 level for the first time in over two years, it’s also been weighing on domestic manufacturers, as well as the Energy sector, as a stronger dollar tends to spell weakness in dollar-denominated commodities, namely crude oil. Lower crude can pressure refining margins. As such, Energy sat out yesterday’s rally, finishing the day down about 1%.

These dynamics might become important to watch in the coming weeks as companies begin rolling out earnings.

Working Out the Kinks?

After filing its initial public offering (IPO) paperwork in August, WeWork seems to have gone from unicorn status straight to the doghouse. Yesterday the once-eagerly anticipated IPO, which had an initial valuation of $47 billion, announced it would be postponing its offering indefinitely. This happened after a number of analysts questioned its valuation and path to profitability—the company lost $1.9 billion last year— and last week co-founder Adam Neumann stepped down as CEO.

While it’s too soon to view one postponed IPO as a canary in the coal mine regarding the public’s appetite for IPOs, several other high-profile IPOs have also stumbled out of the gate. Shares of ride-hailing services Uber (UBER) and Lyft (LYFT), and dental products company SmileDirect Club (SDC) are all off over 30% from their IPO prices. Exercise equipment maker Peloton (PTON), which went public last week at $29, has been pedaling in reverse ever since, settling at $25.10 yesterday. On the flip side, Beyond Meat (BYND) went public earlier this year at an IPO price of $25, and traded all the way to $240 before settling back to the mid-$140s.

The bottom line: New ideas and new industries can take a long time to mature to the point of profitability. And in the absence of solid fundamentals, it’s difficult to know how to value such early-stage potential disruptors. The WeWork saga, however, may be a sign the IPO market is cooling, for the remainder of 2019 anyway. 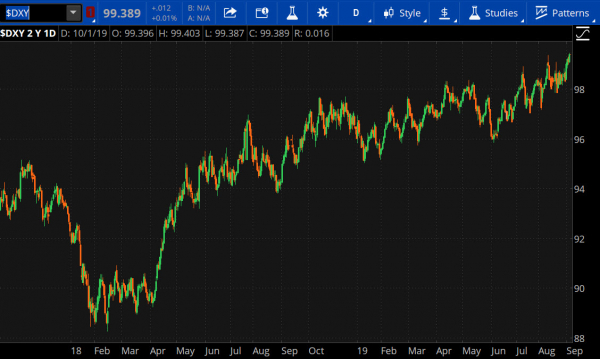 FIGURE 1: CAN YOU SPOT THE TREND? The U.S. Dollar Index ($DXY) has been on an upward trajectory since early 2018, and looks to be flirting with the 100 level for the first time since April 2017. Strength in the greenback has been an anchor on dollar-denominated commodities and metals, as well as on the manufacturing sector.  Data source: ICE. Chart source: The thinkorswim® platform from TD Ameritrade. For illustrative purposes only. Past performance does not guarantee future results.

Story Time: For a while now, there have been three main narratives affecting the market and sometimes driving volatility—the trade war with China, Brexit, and the Fed’s moves to loosen monetary policy. These have been longer-term stories that don’t necessarily have a resolution in sight. Now, it seems there may be a fourth market meta-narrative. The impeachment issue likely could be one of those continuing stories where incremental news each day could either move the market up or down. But a lot of that news flow is likely to be noise that may not truly affect long term market fundamentals. So it’s probably a good time to make sure your current investment strategy is in keeping with your goals and risk tolerance. Story lines come and go, and unless you’re actively trading for the short term, sometimes it’s best not to get too caught up in the minutiae.

October Surprise Ahead? Is the economy coming under additional pressure? We’ll learn more this week as U.S. stocks head into the market’s historically scariest month in a relatively sedate mood. The SPX finished September with about a 2% gain, and starts October about 1.5% below the all-time record close of 3025.86 posted back on July 26. Top-of-list items for investors this week include the September U.S. employment report, scheduled for release Friday. The report is expected to show continued, moderate job growth, with non-farm payrolls forecast to increase about 150,000, according to a consensus compiled by Briefing.com. Inflation, too, remains muted, as evidenced by last week’s core Personal Consumption Expenditure (PCE) Index, which ticked up 0.1% for the month to 1.8% year-over-year growth—below the Fed’s stated target of 2%. Stronger job growth and low inflation likely paint a positive environment for consumers, which is probably one reason confidence readings remain relatively high.

Executives Soon Weigh in on Economy: Aside from Friday’s employment report, other clues on the economy may come from earnings reports, particularly from companies that may be affected by the prolonged trade war. Also, consider listening in on company conference calls, where executives might shed some more light on how trade policy and macroeconomic events could impact future earnings. A few firms that reported outside of the main earnings season recently delivered mixed signals about the economy, but the cascade begins later this month, so hold on tight.