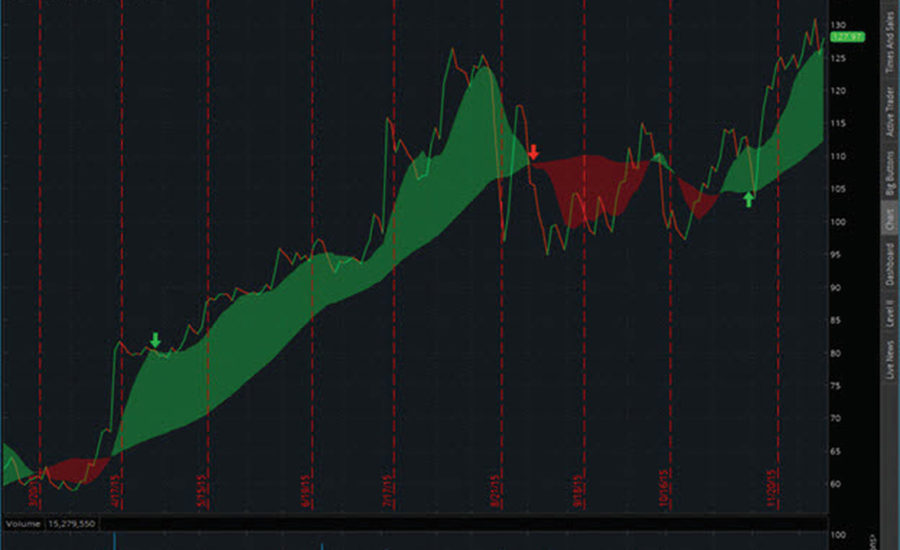 Getting False Charting Signals? Try Out Indicators Off the Grid

People and nature tend to be predictable, right? Too bad the stock market isn’t. Using stock charts can bring a modicum of probability in which to make trading decisions, but what happens when your charts tell you something that doesn’t come true? Where do you go when the common buy and sell signals and market turning indicators—momentum indicators such as the Relative Strength Index (RSI) or Moving Average Convergence/Divergence (MACD), for example—keep giving you false signals? You dig deep and go off the grid.

There are thousands of charting studies and stock chart indicators; the thinkorswim® platform lists more than 300. Here we’ll cover three that are a bit different, yet worthy of attention—the Standard Deviation Channel, Schaff Trend Cycle, and Simple Cloud. Even if you don’t use them yourself, consider this an exercise in learning to uncover hard-to-find studies, and how to use them to anticipate the potential for market moves.

Standard Deviation Channel (SDC)
WHAT IT IS. This statistical analysis tool is normally overlaid on a price chart. To find it (and others in this article), click the Charts tab in thinkorswim. In the upper right-hand corner of any chart, follow the click path to Analysis Tools > Add Study > All Studies. Choose StandDevChannel from the S-S(1) menu.

The SDC is composed of a middle “regression” trendline that’s automatically plotted for you, as well as two other lines plotted above and below it by one standard deviation (which, in statistical geek-speak, means it contains 68% of the price data). See figure 1.

FIGURE 1: STANDARD DEVIATION CHANNEL. This indicator makes it relatively easy to spot when a stock’s price action hits extremes, as well as a line that is mathematically closest to all the charted prices. Source: thinkorswim from TD Ameritrade. For illustrative purposes only. Past performance is no guarantee of future results.
Theoretically, 68% of the price action falls into the SDC if both upper and lower lines are plotted one standard deviation above and below the trendline. If you increase that to two standard deviations, statistically you’ll get 95% of the price action expected to fall into the channel.

HOW IT WORKS. Without getting into the mathematical complexities used to plot the middle regression line, SDC is basically a measure of how much the price has historically tended to move from one point to the next. The study’s idea is that over time, prices tend to regress toward that middle line, which represents where buyers and sellers have agreed to a price the most amount of times. If the price moves above the the top or below the bottom line, that price is now out of its statistically normal range. The thought is that the price may likely fall back into that normal range, or else a new trend is being defined.

Referring again to figure 1, the yellow line is the regression line. Notice that the price reaches the top line, which is two standard deviations above the middle line, noted with the pink arrow. Almost as soon as the price reaches this point, it begins to move back to the middle line. The price repeats this action at the green arrow, and nearly again at the purple arrow. The idea is that because price tends to regress back toward the center line, bullish and bearish potential trade opportunities may present themselves at extreme points of the channel.

Schaff Trend Cycle (STC)
WHAT IT IS. Although the name may be foreign to you, the Schaff Trend Cycle combines two well-known indicators—MACD and fast stochastics. Because these two indicators are typically used together, the STC gives you the chance to see and learn the benefits of each study while looking at a single output.

The main idea is to combine the benefits of trend and cycle indicators, and minimize their drawbacks, such as lags or false signals. The STC’s main goal is to estimate price direction and potential market turning points.

Technically, the STC is an oscillator that moves between 0 and 100, and is calculated as a double-smoothed stochastic of the MACD. In trending markets, the STC is expected to move up if the market uptrend is accelerating. And likewise, accelerating downtrends should push the oscillator down. During sideways markets, the STC attempts to identify potentially oversold conditions when it reverses after falling below 25. Or possibly overbought conditions, when it turns down from above 75.

HOW IT WORKS. In short, many chartists use the STC in trending markets to try to determine if the trend is growing or is in a sideways market, and might indicate a breakout. See figure 2.

FIGURE 2: SCHAFF TREND CYCLE. Combining two popular indicators—MACD and stochastics—to give you a single read on momentum. Source: thinkorswim from TD Ameritrade. For illustrative purposes only.

At the beginning of the chart, the price is not trending in any particular direction. But you see a pattern begin and the STC breaks below the oversold line, shown with the yellow arrow.

Once the indicator reverses and goes above the oversold line at 25, a “buy signal” is triggered (green arrows on the chart in figure 2). Next, after crossing above the top line (overbought line), the indicator crosses back below that line, shown on the chart in figure 2 with the first red arrow. This indicates the trending market has run out of bullish acceleration, and may be at a sell point. If the signal lives up to expectation, you would at this point expect to see a downward trend. While this chart may indicate overbought and oversold conditions, an equity can remain in these conditions for quite a while. (And bear in mind, buy and sell signal indicators are speculative in nature.)

The Simple Cloud (TSC)
WHAT IT IS. A relatively unknown indicator called the Simple Cloud can be overlaid directly on your price chart. As the name implies, the concept and application are, well, simple (assuming you’ve had some experience reading charts). Referring to figure 3, TSC uses two separate simple moving averages to define a trend. By default, the indicator uses 20- and 50-period moving averages, with shading between the lines. The color of that shading is used to display trend direction.

FIGURE 3: THE SIMPLE CLOUD. Taking matters into my own hands, I created this simple indicator using thinkScript on thinkorswim to generate visible buy/sell signals to consider when two moving averages cross over. Source: thinkorswim from TD Ameritrade. For illustrative purposes only.

Taking matters into my own hands, I created this simple indicator using thinkScript on thinkorswim to generate visible buy/sell signals to consider when two moving averages cross over. Source: thinkorswim from TD Ameritrade. For illustrative purposes only.

HOW IT WORKS. You can see TSC recognized the bull trend when price closed inside the green cloud (indicated by the first green arrow). We then saw a confirmed pullback, indicated by the red arrow. If a long position would have been established after the first arrow, this red arrow might indicate that the trend could possibly be over. Then, TSC goes back to work and confirms that a new bullish trend may be beginning with the close price indicated by the second green arrow.

As an aside, when you just can’t find what you want with traditional indicators, you can create your own using the thinkScript tool in thinkorswim. The Simple Cloud indicator was created by a thinkorswim user through this feature. Since this one isn’t available among the 300 other indicators, I can share the study with you to import into your own thinkorswim software.

Naturally, these studies are simply guides to help determine direction. They are theoretical, offer no guarantee, and can’t predict the future. The idea of any chart indicator is to simply help identify high-probability chart points to help you take action—i.e., enter, exit, and manage trades. The market changes constantly. So it’s worth evolving your charting chops with a mix of traditional indicators and those that challenge conventional wisdom. If these don’t fit your style, the thinkorswim platform has plenty of others to consider.