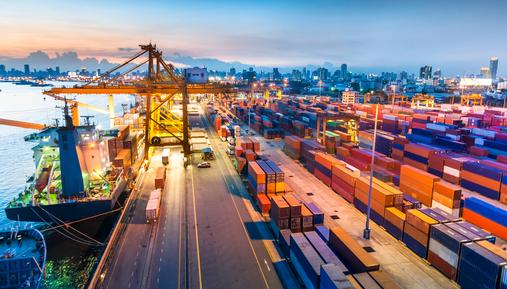 Industrials make, transports take – it’s one of the foundational components to the technical analysis system known as Dow Theory, and to our economy in general.

The Dow Jones Industrial Average (DJI) continues to hog financial media headlines as it scales all-time high after all-time high this year. However, the Dow’s big-wheeled cohort, the Dow Jones Transportation Average (DJT), has taken a recent tumble, dropping nearly 6% from a record close in mid-October.

Some market professionals follow the transportation average, aka “the transports,” as one gauge of the U.S. economy, as the index includes many of the nation’s largest airlines, railroads and other companies responsible for moving people and freight from point A to point B. A healthy economy typically translates into strong demand for shipping and related services.

The transports have also been considered a leading indicator. For example, if the Dow industrials are rising but the transports are declining, that may signal an economic slowdown. What gives? Here’s a few factors possibly at play and other things to keep in mind:

The price-weighted transportation average is believed to be the oldest stock index, first compiled in 1884, making it about a dozen years older than the industrial average. Nine of the first 11 companies were railroads.

According to Dow Theory, the transports should “confirm” the trend of the Industrial average; “divergence” may indicate a potential reversal of a trend.

For the year through November 13, the industrial average was up about 18.7%, while the transportation average was up about 5.2%. Is this the sort of “divergence” that suggests trouble for the economy? At this point, there doesn’t appear to be much cause for concern, several professionals say (especially considering U.S. GDP jumped 3% in the third quarter).

Transports “are often a barometer for health for the broader economy but are not a pure economic play,” says Greg McBride, Chief Financial Analyst with Bankrate.com. Transportation companies “are still subject to industry dynamics and pressure on profit margins. Also, by nature, these companies tend to be more capital- and labor-intensive and slow-growers.”

This year’s outperformance by broader market measures, such as the industrials and the S&P 500, also reflects investors’ quest for higher-growth sectors, such as technology, McBride adds.

Transports’ recent dip comes with crude oil rallying to the highest levels in over two years. West Texas Intermediate crude, the U.S. benchmark, has surged about 20% since the end of June, topping $57 a barrel last week.

Oil remains well below the $100-plus levels that hurt airlines a few years ago. Still, a sharp upswing in crude typically portends higher jet fuel prices, a major expense for airlines.

Larger airlines are also grappling with intense fare competition from discount carriers, some analysts say, making their shares among the weakest performers in the transportation average this year.

Riding the Rails (and Highways)

Railroads are among the top transport performers this year as the growing economy boosts demand for raw commodities like coal, oil and steel, and for cars and other goods.

That demand is reflected in many numbers for the railroads. During the first 44 weeks of 2017, U.S. railroad traffic totaled nearly 23.3 million carloads and intermodal units, up 3.5% from the same period in 2016, according to the Association of American Railroads.

In October, intermodal traffic, referring to freight shipped in large containers via multiple modes of transportation, reached the highest level ever, according to the railroad association.

In other words, most everything at ground-level in the transportation industry may be doing just fine, despite rising oil prices.

Rail and trucking demand “are both healthy this year,” and have been since the fourth quarter of last year, says Keith Schoonmaker, an analyst with Morningstar, Inc. Additionally, trucking company rates have been firming amid stronger demand and tight capacity, he says.

Over the past year, “most transports have been operating well, and delivering solid margins (indeed, record margins at some railroads). Balance sheets are healthy too,” Schoonmaker adds. “Looking forward, we expect demand to continue to improve broadly.”