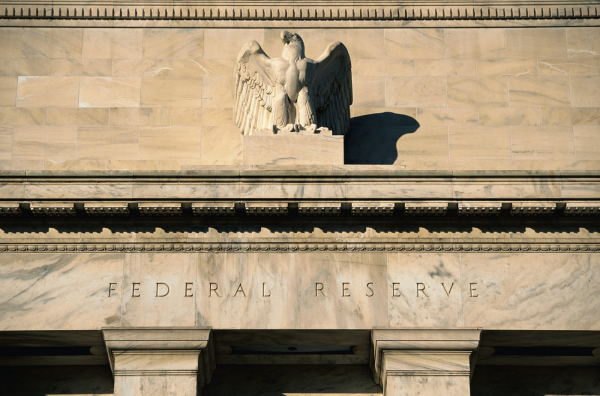 Lots of retailers report this week, including Target and Kohl’s

Before heading west, however, the week began with the yield rebound from last Friday continuing. The U.S. 10-year Treasury yield is spiking higher and near 1.61% as Treasuries are sharply lower. The 30-year yield is rising and back to 2.1% this morning.

These stronger yields might be lifting spirits after the brief inversion we saw last week. The spread between the 2-year and 10-year yield is now back above 10 basis points, and the further they get away from each other the more things might calm down. So this morning the driving factor isn’t so much that stock futures are up, but that bond prices are down (and yields are up). Still, the bond market is likely to continue being the dominant feature until further notice.

Rumors of a possible German economic stimulus and more optimism around talks with China also helped paint the morning green in pre-market trading. Tariffs remain the biggest theme of the week.

Another piece of news that might be helping: Reports in the media say Huawei will get a three-month extension from the U.S. Department of Commerce on a license that allows it to buy parts from U.S. companies. That license was set to expire today. This could be one thing helping stocks in China, which were up 2% on Monday, and it might play well with the Semiconductor sector here in the U.S.

It’s a 180-degree turn in some ways from last year’s symposium. Back then, the question was how high interest rates might rise as the U.S. 10-year yield challenged 3% and the Fed continued tightening. Now, with the 10-year yield at three-year lows below 1.6%, the Fed lowering rates, and the European Central Bank (ECB) also talking about an easing, the question is whether investors will get their rate hopes reinforced. If they don’t, it’s potentially another long week for U.S. markets in what’s been a volatile and brutal August.

One possible key to Friday’s rally was the 10-year yield finishing the week above the two-year yield after that brief inversion back on Wednesday. That’s still a very precipitous relationship that investors might want to keep watching as the new week rolls on. The stock market has fallen for three straight weeks amid yield pressure.

Volatility pulled back Friday, and gold and bonds both dropped early Monday, a sign that maybe investors are getting some of their market mojo back. However, trying to push bonds down lately has been like trying to wrestle a balloon, so we’ll see if it lasts.

Another factor in Friday’s rally was General Electric’s (GE) sharp recovery the day after shares dived on an allegation of fraud that the company denied. GE bouncing back helped a lot on Friday. However, the market’s overall comeback at the end of the week was on very light volume, which the bears would probably say is an argument against any bullish scenario.

A big rally Friday in semiconductors after positive earnings from Nvidia (NVDA) also didn’t hurt, and it was good to see the Russell 2000 (RUT) small-cap index outpace its bigger cousins the S&P 500 Index (SPX) and Nasdaq (COMP). Strength in the Financial sector might have played a role there.

The week ahead brings more retail and semiconductor earnings, with Target (TGT) and Kohl’s (KSS) likely to get a close look from investors. Tomorrow is a big morning with Home Depot (HD), KSS, and TJ Maxx (TJX).

TGT could be very interesting when it reports before the open Wednesday. The company is under pressure to separate itself from the other big boxes and put itself on the same plane as Walmart (WMT), whose earnings last week looked really solid. TGT arguably needs to show consistency in its earnings, and investors might also be looking to see if TGT can take market share.

The way things have gone recently for KSS, there seems to be some nervousness out there as the company prepares to report early Tuesday. KSS execs recently talked about the challenges of getting people in the door, so maybe we’ll see if they’ve overcome that.

Foot Locker (FL) is another key retailer reporting this week. Nordstrom (JWN) and Lowe’s (LOW) are also on the calendar. Homebuilder Toll Brothers (TOL), like HD and LOW, may offer some perspectives on the housing market.

The earnings parade began early Monday when Estee Lauder (EL) beat third-party consensus estimates for earnings and revenue. Shares rose more than 6% in pre-market trading. Sales looked strong in China and guidance was near the high end of expectations.

One continuing theme from earnings is that the consumer is still king. Another is that many companies have said they’re having challenges, but that the tough times are more of a blip than a long-term thing. That could give investors some hope going forward.

It’s kind of a quiet week on the data front, aside from existing home sales and Fed minutes. Those Fed minutes Wednesday afternoon could get more attention than usual, however, as investors try to get a read into what type of conversation accompanied the decision last month to lower rates 25 basis points. Two voting members of the Federal Open Market Committee (FOMC) dissented on that decision, an unusually high number. It’s possible the minutes could outline their objections and give insight into their arguments against lowering rates.

The pendulum that keeps swinging between numbing daily losses and dizzying daily rallies might have a fulcrum. Since things started moving fast earlier this month, the SPX seems to have found a home roughly between lows of around 2825 (the low area reached twice earlier in August), and a peak of around 2940, which the SPX reached in one of its sharp but short-lasting rallies almost two weeks ago. If you look at all the ups and downs since then, they’ve occurred between this range of roughly 115 points in the SPX, which is only about 4% of the index’s total value.

The 2940 point is an interesting one because it’s also right about in line with peaks reached last September that held as all-time highs until this summer, when the SPX shortly flirted with highs above 3000,. That means this is a level that could be worth watching for any signs of short-covering if it’s breached in any meaningful way. The longer-term SPX range remains between 2800 and 3000, technical analysts said.

Hopefully this helps put things in a little more perspective, because after the two weeks we just went through, perspective could be useful. Back on Wednesday, it might have felt like the end of the world as stocks had their worst day of the year and yields ended just above an inversion. By Friday, we were back to just 3% below the all-time high and flirting with 2900 again. In fact, the SPX’s close at 2888 marked the exact midpoint between recent highs and lows. 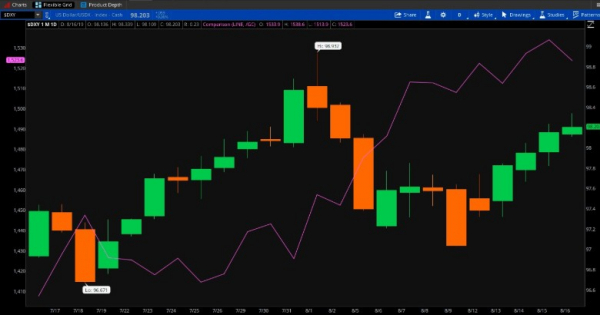 Walmart Vs. Amazon: Thanks mainly to positive earnings that lifted its shares 6% on Thursday, Walmart (WMT) is now outpacing Amazon (AMZN) in one place investors often check: The stock market. The stock is up 21% so far this year, compared with 19% for AMZN. Seeing the biggest of big box retailers surpass the e-retail giant is something that might have been hard to imagine two-and-a-half years ago, back when FAANG stocks were the darlings of Wall Street. As we noted the other day, the consumer remains strong, and WMT earnings reflect that, even if some other retailers continue to struggle.

However, WMT may not be out of the woods yet on tariffs. Some of the products it sells are targeted by the next set of tariffs taking effect next month, including school supplies like pens and pencils—many of which are made in China—as well as some sporting goods and clothing, the Chicago Tribune reported. Reports in the trade press said WMT isn’t likely to raise prices in response to tariffs, which makes it sound like the company might eventually see profits affected if a trade deal doesn’t come soon.

Fingers Tapping: Though the bond market climbed the ladder last week and yields sank to new 2019 lows well below 1.6% for the 10-year Treasury note, some of this conservative psychology apparently taking hold among investors might have a silver lining. What we’re continuing to see from the retail end is short-term buying on bonds, which is arguably bullish for stocks. In other words, the money piling into bonds seems concentrated mainly on short-term bonds, not long-term ones where people put their money for years. This could suggest that people want to put their money back to work in the near future, but don’t know when they’re going to so they’re parking it in short-term fixed income for the meantime. While you can’t predict, action like this might hint that some investors are waiting for an end to the trade war for a new entry point into equities.

Great White North: Headline writers made hay last week with President Trump’s reported idea to buy Greenland, leading some people to ask why he’d want it. The last time the U.S. made a big land purchase—for Alaska back in 1867—it was called “Seward’s Icebox.” The land was widely believed to be a frozen waste with little value for the $7.2 million that Secretary of State William Seward agreed to pay Russia. Now, decades after crude began flowing down the Alaska Pipeline, those old jokes seem kind of short-sighted.

Like Alaska, crude could be a reason for economic interest in Greenland. A 2008 study by the U.S. Geological Survey (USGS) projected more than 50 billion barrels of oil and natural gas might lie off its icy shores (more than the North Sea has produced in its history). A USGS report last year determined that a single province in Greenland could have 10.7 billion barrels of oil and 75 trillion cubic feet of gas. It’s unclear how much crude could be produced daily there, especially when you consider the complicated logistics, but you could argue that it might supplement falling Alaska production. Output in the 49th state is now under 500,000 barrels a day, down from 2 million a day in 1988. Still not an “icebox,” but pretty much a drop in the bucket vs. world demand of around 100 million barrels a day.