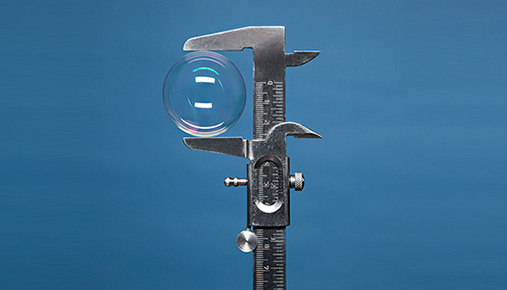 How to Blow (Off) Bubbles

From tulip bulbs to dot-coms, history is littered with the wreckage of market bubbles. Current conditions aren’t raising red flags among most market experts. Nonetheless, investors should always be on the watch for irrational exuberance and look for ways to protect themselves if things turn sour.

How do you know when a high-altitude market is about to return to earth? When your hairdresser starts giving you stock tips. Or so goes an old joke. Not so funny when you look at history. Why do asset bubbles happen, century after century? There are no simple answers. This takes us beyond basic portfolio strategy and deep into the nooks and crannies of the human psyche, into phenomena that may seem impossible to quantify on a chart or stock watchlist—crowd behavior, herd mentality, greed, fear, panic.

A HISTORY OF BUBBLES

Shortly after tulips were introduced in Europe from present-day Turkey, the plant became a status symbol in Dutch society. Speculators starting buying tulip bulbs to “flip” later at a profit, and prices surged to the equivalent of tens of thousands of dollars in today’s money.

The American economy boomed and the stock market soared as new technologies, such as the airplane, automobile, and radio, became commercialized. Many speculated in stocks with borrowed money, aka margin. October 1929 brought Black Tuesday, as the stock market went into free fall. Soon after, thousands of banks failed, unemployment spiked, and the Great Depression was under way.

Internet-company shares skyrocketed amid beliefs technology had created a “New Economy” where traditional business cycles and recessions were no longer relevant. Scores of dot-coms went public and saw stock prices rally, even though many were losing money. In March 2000, the NASDAQ peaked above 5,000, then plunged, losing nearly 80% by late 2002.

Experts and amateurs alike will forever be debating bubbles (read on for an assessment of the market’s recent state of play). Sure, it’s easy to play Monday morning quarterback and tsk-tsk the market follies of our forefathers and foremothers. But how to stay out of bubbles in the future? While there’s little reason to believe we’re currently in one, the lessons learned from past bubbles are good for any potential downturn—whether caused by a bubble or not. First, start by accepting the fact that you can’t control the markets or the actions of your fellow investors. Then look at every trading/ business day as an opportunity to get ahead of the pack.

The collective answer among many market professionals might be summed up by paraphrasing former Supreme Court Justice Potter Stewart’s test for hard-core pornography: I won’t attempt to further define it, but I know it when I see it.

In a bubble market, growth expectations become steroid-gorged exaggerations, speculation flips into overdrive, and emotions seem to trump the cold, hard, fundamental metrics typically applied to value an investment: cash flow, price-to-earnings ratios, and so forth. Trading volume surges as more and more people jump into markets chasing the big prize. That’s a big part of what happened during the 1990s dot-com boom, when countless Internet start-ups with no profits to speak of—but plenty of “eyeballs!”— fueled a frenzy that, as we know, ended badly (see figure 1).

Generally speaking, a bubble happens when asset prices “run well ahead of underlying fundamental factors,” according to Pat O’Hare, Chief Market Strategist at Briefing.com. Under such a scenario, those assets are setting up for “a huge correction,” he said. 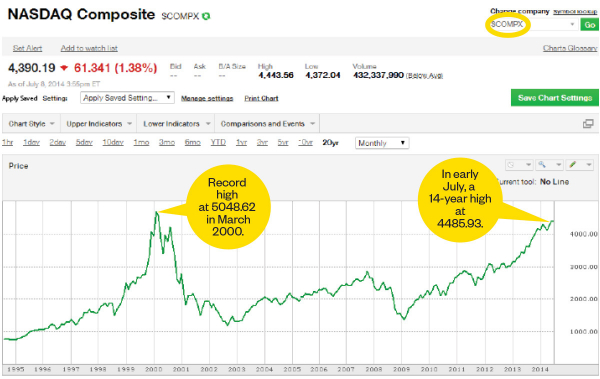 FIGURE 1: POP GO THE DOT-COMS. The technology-heavy NASDAQ plunged
nearly 80% ater the Internet bubble collapsed in early 2000; despite rallying for the past
few years, the index in mid-2014 remained about 11% below the record peak. Source:
TD Ameritrade. For illustrative purposes only.

In short, we’re only human. Also, greed is not good. Here, we get into crowd behavior and the basic desire to want more and not miss out on a “sure thing.” As a market rallies and rallies, the “herd” grows larger and builds momentum. Investors start rationalizing and overreaching for justification for why they’re throwing their money around in such a way. The latecomers get in at or near the peak. Then, look out below. Another old trader saying comes to mind: A market takes the stairs up and the elevator down.

Bubble investors “look for whatever indicator will help prove their case,” said Sam Stovall, Managing Director of U.S. equity strategy at S&P Capital IQ. “You get caught up in the moment, you second-guess yourself, only to have reality throw cold water in your face.”

Are We In One?

Looking at recent conditions in the broader market, neither Stovall nor O’Hare see reason for alarm. Although price-to-earnings ratios are higher than historical averages, they are not alarmingly so. Nevertheless, that doesn’t mean that certain market sectors aren’t a bit frothy. “The stock market overall is not in a bubble,” O’Hare said. “There are certain pockets, such as social media, marijuana stocks, and biotech, we would say are in a bubble formation.”

Some market watchers argue the Federal Reserve’s near-zero interest rate policy to stimulate the economy in recent years contributed to the rally in U.S. equities, spurring investors to reach for riskier investments and higher returns than they can get in low-yielding bonds. But the Fed is already scaling back its stimulus efforts and will eventually start hiking rates again, possibly in 2015. Keep your eyes open for how the markets will handle the inevitable Fed tightening phase.

Even though the bubble rumors are likely just cautionary tales, it doesn’t hurt to step back and consider a couple of guiding principles when things feel a little bloated.

TAKE THE EMOTION OUT. Emotions will always be part of investing—there’s no getting around that. But stay cool and vigilant, and be prepared to take a step back if you feel your mind start racing. Don’t let yourself get sucked into a speculative vortex. 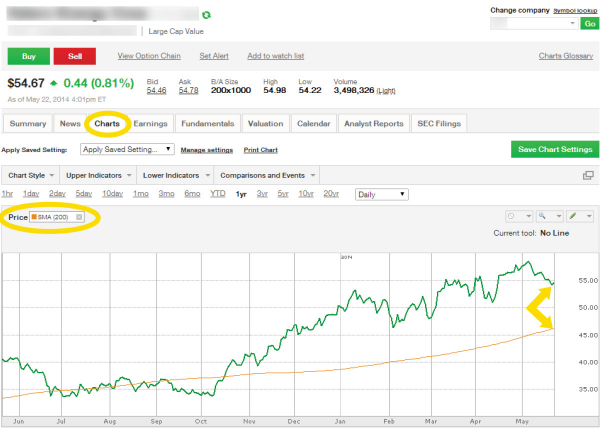 FIGURE 2: CHART WATCHING. Indicators such as the 200-day simple moving
average provide guidance on whether a longer-term uptrend remains intact; the stock in
this chart is about $8 above its 200-day SMA (orange line). Source: TD Ameritrade. For illustrative purposes only.

“If you find you are emotional, embrace a rules-based investing approach to extract the emotions from the equation,” Stovall said. This could include establishing specific price, profit, and loss targets for a particular stock, as well as incorporating chart indicators, such as moving averages, available when you log in to your account on tdameritrade.com, which can help you identify when to cut and run (see figure 2).

Another handy tool is the “trailing stop,” which moves in tandem with the stock price and can mitigate some psychological issues that often pop up as markets move—both in your favor and against you. Say a stock you bought at $100 with that 2% trailing stop climbs to $110, then drops. With that 2% trailing stop, your stop would automatically trigger a sell order at the next available price if the stock price falls to $107.80 or lower. 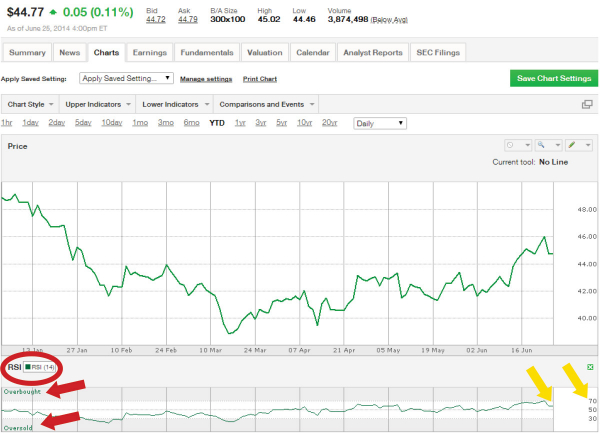 FIGURE 3: IT’S ALL RELATIVE. Add a 14-day RSI (red circle) indicator for a sense of
whether a stock is getting pricey or cheap. The stock in this example has an RSI of about
58 (yellow), between the boundaries of whats considered overbought and oversold (red
arrows). Source: TD Ameritrade. For illustrative purposes only.

EXPLORE YOUR OPTIONS. Options and yes, even futures, can also offer a measure of protection for a limited period of time in the event a specific stock, or broader market, takes a turn south. Look at calls and puts as a type of insurance policy, similar to what you might have for your home and automobile. The most common are:

COVERED CALL. If you already own shares that have clocked a solid return, a covered call strategy might be worth considering, especially if there’s a news event with price implications, such as quarterly earnings, looming.

MARRIED PUT. If you don’t own a company’s shares but plan on buying, purchasing a put along with the stock position can provide downside protection should the stock price fall below the strike price of the put.

FUTURES CONTRACTS. Linked to common benchmarks like the Standard & Poor’s 500 index, futures are another route, as these instruments don’t “decay” as options do, referring to the typical erosion of the value of a call or put over time.

While it may seem exciting to take a ride on a stock that’s shooting for the moon, make sure you’re frequently asking yourself if the market is getting a little “bubble-licious.” Bubbles eventually burst, so don’t let yourself get caught up in a feeding frenzy. Take a step back to examine your emotions, your charts, and your “options.”