Editor’s note: This article is the third installment in a series on candlestick patterns. The first article introduced candlestick charts. The second installment looked at trend reversal patterns—a single candle or group of candles that indicate a change in trend may be coming.

A continuation pattern is a pause or pullback during an established trend, which, when completed, in the view of candlestick fans, should continue to move price in the direction of the trend. But just like with reversal patterns, there are a few things to keep in mind with continuation patterns:

With that said, let’s look at some popular candlestick continuation patterns.

As the name implies, this pattern involves three white (green) candles in a row, with the following criteria:

These three up (green) candles signify that the minor pullback is potentially over, and the previous trend may be resuming. Image source: The thinkorswim® platform from TD Ameritrade. For illustrative purposes only. Past performance does not guarantee future results.

In figure 1, an established uptrend is in place, and after a minor pullback, the three white soldiers pattern appears, signaling that the uptrend may be continuing.

The rising three methods is a bullish continuation pattern, and although it would seem from its name it consists of three candles, it’s actually five:

On occasion, there may be more than three short candles in this pattern, but it’s considered more powerful with only three.

This image shows a five-candle consolidation pattern before the previous trend continues. Image source: The thinkorswim® platform from TD Ameritrade. For illustrative purposes only. Past performance does not guarantee future results.

This is a two-candle continuation pattern that can be either bullish or bearish depending on the previous trend direction.

The bullish version is identified by:

A bearish separating lines pattern has the opposite characteristics. 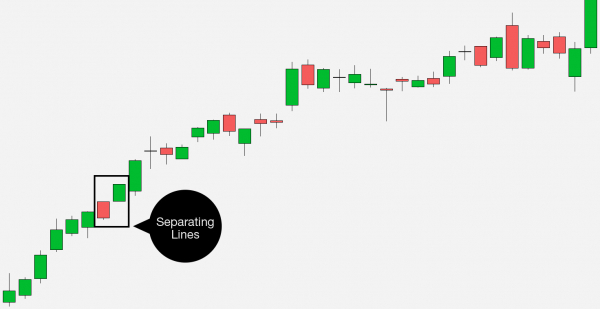 This is a two-candle pattern that indicates the current trend may continue. Image source: The thinkorswim® platform from TD Ameritrade. For illustrative purposes only. Past performance does not guarantee future results.

This last candlestick pattern is one of the few continuation patterns that can only be bearish:

There is a slightly different version of this pattern called on neck. It too signals only bearish continuation, and the only difference is that the second candle’s closing price is equal to the low price of the first candle.

This bearish-only continuation pattern indicates that the downtrend may continue. Image source: The thinkorswim® platform from TD Ameritrade. For illustrative purposes only. Past performance does not guarantee future results.

These are just a few of the more common continuation patterns. As with any type of pattern recognition, there are no guarantees as to which way price will go next, but these and other candlestick patterns can help alert you to possible outcomes. To learn more about these patterns and more, visit the thinkorswim Learning Center.