June Outlook: Fed in Focus Ahead of Meeting Amid Hints it May Get More Hawkish – Professional ThinkorSwim indicators – Premium ThinkOrSwim Downloads & Indicators 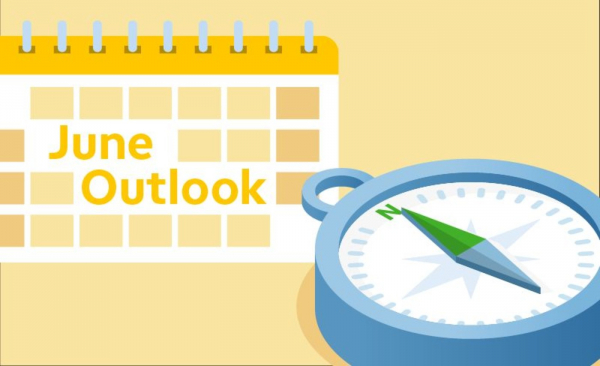 June Outlook: Fed in Focus Ahead of Meeting Amid Hints it May Get More Hawkish

A lot’s happening in June, but the most intense focus could be on a single event the afternoon of June 16.

That’s when the Federal Open Market Committee (FOMC) wraps up its June meeting and Fed Chairman Jerome Powell addresses reporters. While a Powell press conference is important whenever it happens, this one has more significance than usual because of what the Fed said at its April meeting.

Minutes from that gathering raised the chance of the Fed beginning to plan some sort of “taper” if the economy keeps galloping along. Remember, the Fed’s been snapping up $120 billion in Treasury bonds and mortgage-backed securities each month to provide liquidity and keep rates low during the pandemic, but has said it will begin “tapering,” or slowing the pace of those purchases, if certain employment parameters are met. Chances of a taper happening in the relatively near future suddenly appeared more likely based on the following words in the April minutes:

“A number of participants suggested that if the economy continued to make rapid progress toward the Committee’s goals, it might be appropriate at some point in upcoming meetings to begin discussing a plan for adjusting the pace of asset purchases.”

That statement appeared to surprise some analysts. They hadn’t expected the FOMC to publicly ponder actual tapering until possibly later this year. Those words, along with a string of robust economic data and earnings numbers, might have investors on tenterhooks waiting to hear the Fed’s fresh thinking on June 16. Will it give any hint of how long it’s willing to let things continue rolling full steam ahead? Just how worried are Powell and company about rising prices?

Any sign that the Fed is ready to taper earlier than expected could cause Treasury yields to rise and potentially put pressure on the stock market.

As the Fed Turns…

It’s hard to blame Fed officials for wondering if the economy might be on the verge of overheating. After all, Q1 gross domestic product (GDP) grew more than 6%, the highest in decades. Layoffs appear to be trending much lower, if weekly initial jobless claims are correct, and many companies said during Q1 earnings season that they’re having supply chain issues even while paying more for the raw materials they need. This raises concerns about producer inflation making its way to consumers.

The final straw might have been April’s consumer price index (CPI), which showed more than 4% year-over-year growth, the highest in a decade. Core month-over-month CPI saw its sharpest rise since April 1982, when President Reagan was serving his first term and Powell was a recent law school graduate.

Though the Fed didn’t have all of this data in hand when it met in late April, the signs were already pointing toward major economic growth and price pressure, putting the Fed between the proverbial rock and a hard place.

Powell has emphasized the importance of getting millions back to work, with unemployment still around 6% more than a year after the pandemic began. Earlier this year, the Fed made it very clear it would tolerate inflation above its 2% long-term target until employment got back on track, but this risks the chance of price pressure hurting consumers and companies. Corporate margins look very positive right now coming off huge Q1 earnings growth, but inflation over coming months could change that, perhaps resulting in pressure on stocks.

There could be more Fed remarks in the next week or two, but then the pre-meeting silent period begins and June 16 looms. Powell is almost certainly going to face questions about those April meeting minutes.

Tug-of-War Persists Between Growth and Value

All this focus on the Fed turns attention to the benchmark 10-year Treasury yield, a major metric for economic growth, inflation, and interest rate anticipation. It rallied from near historic lows of around 0.95% at the start of the year to a late-March high of 1.78% as the economy improved and inflation fears gathered. It then pulled back and hung around near 1.6% for a couple of months, trading at 1.61% as of late May.

Anywhere above 1.75% might look interesting now, and 2% might spark some fear in the market. The rally in yields earlier this year really helped snuff out the Info Tech rally, since many of those stocks are priced in part based on anticipation of future growth, something higher borrowing costs might compress.

That helped lead to the current tug-of-war between value sectors like Financials and Energy that tend to do better in a recovering economy where inflation is rising and Growth ones like Tech that outperformed during the shutdowns of 2020. The battle has raged most of the last two months, though there are now signs of at least some investors beginning to bifurcate Tech between the huge, mature companies like Apple (AAPL) and Microsoft (MSFT) and smaller firms more dependent on keeping future growth paths skyrocketing. The AAPLs and MSFTs of the world have often led the broader market higher the last few years, and could be less vulnerable then smaller Tech firms if interest rates do start to rise. 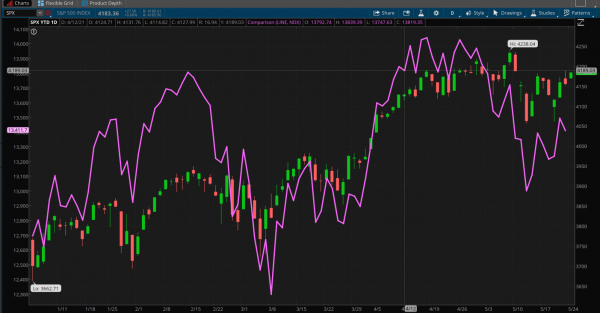 FIGURE 1:  MAY MALAISE. After a strong start to 2021, the S&P 500 Index (SPX—candlestick) had some struggles in May amid inflation worries. The Nasdaq 100 (NDX—purple line) has had a much more checkered year as some investors favored value over growth sectors, and continued to be weak heading into June. Data Sources: S&P Dow Jones Indices, Nasdaq. Chart source: The thinkorswim® platform. For illustrative purposes only. Past performance does not guarantee future results.

Here are a few data releases and events to watch for in June:

But we may be putting the cart ahead of the horse, so to speak. The April jobs growth number of 266,000 was way, way below Wall Street’s expectations for more than 700,000 and some bullish predictions of a million. That puts focus squarely on the May jobs growth number, due June 4. Another weak jobs reading for May might take some pressure off of the Fed and rates, with “bad news” possibly becoming “good news” for stocks, so to speak.

Remember that different U.S. states were in different reopening modes in April, which may have affected that number. It’s possible some of the earlier job growth won’t show up until May, or the April number could be revised upward once things become clearer. A lot of what Powell says and does on June 16 will likely reflect the jobs report, along with inflation data like the May 28 personal consumption expenditure (PCE) prices, which the Fed is known to follow closely.

The May CPI report on June 10 is another key one to watch next month when it comes to inflation. The Fed will have all that material in hand by the time it meets, giving it a clearer perspective.

That’s a mouthful about the Fed, inflation, jobs, and yields. What about the corporate world?

As we emerge from a Q1 earnings season where the average S&P 500 company recorded earnings per share growth of nearly 52%, according to Factset, you might think earnings aren’t a big calendar item in June. That’s only part true. While we won’t see a big crush of earnings reports, there are some key ones to watch, especially in the home building sector where both Lennar (LEN) and KB Home (KBH) are expected to report during the month.

The housing market has been red hot, so a couple of April data points that missed analysts’ expectations (existing home sales and housing starts) might not be too big a deal. Having said that, the economy’s reopening could take peoples’ attention away from home buying and give strength to companies that focus on experiences rather than products. It’s possible some of the strength in housing and home improvement got pulled forward by the pandemic, just as we saw demand for internet conferences and home exercise equipment pulled forward. Keep an eye on what LEN and KBH say about demand when they report.

Zoom Video (ZM), Kroger (KR), Chewy (CHWY), and Slack (WORK) are some other companies whose businesses saw a big impact from Covid and release earnings in June. Most of them benefitted from people staying at home, questions remain over how much of their recent growth in sales has been sustainable vs. “demand pulled forward.” Many of their shares have lost ground and investors are eager to hear how they plan to keep the fizz bubbling post-Covid. Meanwhile, Tech earnings are a bit scarce in the month ahead, but Oracle (ORCL) is expected to be on the June release calendar.

Like it or not, cryptocurrency could also help determine the market’s direction in June. It seemed like bitcoin set some of the momentum in late May, though that’s not a permanent indicator by any stretch of the imagination. However, when the news flow gets quiet and people start looking for indicators on how to trade, bitcoin and other cryptocurrencies have been something many investors watch. The question is whether the stock market is starting to divorce itself more from cryptocurrency after huge swings in bitcoin prices recently.

Volatility is another metric to watch. The Cboe Volatility Index (VIX) hung around near 20 in late May after a month where it seldom went below 18 or above 25. VIX typically spends a long time trading in specific ranges, so the next thing to check is whether the current range holds or if it steps up or down. A move higher in volatility, especially any prolonged stays above 25, would presumably reflect mounting investor uncertainty and worries about what’s ahead. If VIX falls below 20 and stays there awhile, it could point to a quiet summer.

We haven’t mentioned Covid so far except in passing. That’s a good thing, because it means it’s not front and center the way it once was. As of late May, the U.S. seemed to be on very good footing thanks to vaccinations, with case counts falling to the lowest daily levels in nearly a year. No one knows if this will continue, but we can be hopeful.

We can also hope that the current devastating impact of Covid in parts of Asia slows down in the month ahead. Right now, it appears that the situation there might be putting a bit of pressure on the blazing commodity markets amid worries about overseas demand for products like crude and copper. China also tried to clamp down on commodity prices in late May, saying it will move to reduce speculation.

We started with inflation, so might as well end with it. The commodities market is another aspect of pricing pressure, especially for companies in the Materials, Information Technology, Transport, and Industrial sectors. Costs rose sharply so far this year for many of the core products they use, but if commodities continue to level off or even fall in June, that could relieve some of the pressure on companies and the Fed. Whether that happens could be determined by progress against the pandemic the next few weeks in places like India, Japan, and South Korea.

Become a smarter investor with every trade.