With Crude Near 3-Year Highs, Should Investors Worry About $100 Oil?

Weak U.S. and OPEC output, supply bottlenecks, and strong demand may be driving prices up

What’s going to rescue the U.S. economy and markets from $100 per barrel crude, and do they even need rescuing?

Consider this: One of the best recent years for the U.S. stock market was 2013, when the economy really started to recover from the Great Recession of 2008. Through much of 2013, the price of crude was above $100 (compared with the mid-$70s in early July), and gas cost more than $3 per gallon across much of the country.

High crude didn’t make the wheels fall off then, and although the 2021 outlook is uncertain, the economy has been roaring ahead by most measures despite those higher energy prices. Plus, Energy sector companies have led the stock market charge, rising more than 40%.

Still, expensive gas can hurt many industries, including transports like airlines and trucking firms, but also some you might not initially think of. Most of the big Consumer Discretionary sector companies like Walmart (WMT), Target (TGT), and Amazon (AMZN) benefit on the bottom line by sourcing products in places like China where labor is cheaper and then shipping finished goods to the United States, Canada, and Europe.

The cost of shipping isn’t typically a huge determinant of companies’ operating margins, but expenses can certainly leave a dent when crude stays high, eventually figuring into bottom-line growth. Or the companies could pass along higher prices to customers, fueling inflation.

Another problem with high fuel costs is the impact on consumer spending. “When gasoline prices increase, a larger share of households’ budgets is likely to be spent on it, which leaves less to spend on other goods and services,” wrote the San Francisco Fed. Consumer spending drives more than two-thirds of economic growth, and higher gas prices act like an extra tax.

That said, many economists believe there’s been a breakdown in the relationship between pricey crude and gross domestic product (GDP) growth in recent decades. That may have been the case in 2013 as the economy revived despite elevated crude.

Companies across many industries have reduced their dependence on oil over the years, and cars and planes are far more efficient these days. Crude rallies might pack less of a wallop than back in the 1970s, when cars generally got 15 miles to the gallon and two oil shocks led to economic crashes.

Here are some reasons crude might reach $100 per barrel after setting all-time lows during the COVID-19 sell-off of 2020:

U.S. production slowdown: As of late June 2021, U.S. crude production averaged 11.1 million barrels a day, according to the U.S. Energy Information Administration (EIA). That’s barely above the 11 million average at the end of 2020 and down nearly two million barrels a day from pre-pandemic levels. However, production doesn’t seem to be returning to those pre-pandemic highs.Weaker overseas production: It’s not just the U.S. producing less crude. OPEC+ (meaning OPEC plus Russia) kept the lid on production since the pandemic began and has been relatively slow to bring it back despite recent economic growth. The world’s economy is running at an oil supply deficit of about 3 million barrels a day, according to Goldman Sachs (GS).Bottlenecks: Why isn’t crude production catching up? Perhaps it’s part of an overall economic narrative where multiple industries are encountering what the U.S. Federal Reserve calls “bottlenecks” in bringing production and shipping back to where they were before the pandemic. Whatever the reason, overall demand for crude this year is expected to grow by 6 million barrels a day to around 96.5 million barrels a day on average, an increase of 6.6%, according to OPEC projections. If demand keeps spiking and production doesn’t keep up, prices could continue to sizzle.ESG considerations: Crude producers are under pressure from environmental groups, investors, and even insiders to reduce global warming. In May, shareholders of Exxon Mobil (XOM) elected board candidates nominated by activist investors who pledged to steer the company toward cleaner energy and away from oil and gas. Political considerations: Government regulation is another source of environmental concerns pressing production. “We … expect more stringent environmental regulations and tax policy to support energy prices in the long run,” said Joyce Chang, chair of Global Research at JP Morgan (JPM), in a recent interview with Barron’s.Energy investors: The Energy sector has roared back this year, and companies may be under pressure to award investors who stuck with them. “In the past few months, some (energy) companies have hiked dividends, issued special dividends, or begun policies to return more to shareholders,” Barron’s reported recently, mentioning XOM and Devon Energy (DVN) as two examples. The more companies spend on dividends and buybacks, the less they might have to drill and find new supplies. Consumer demand: The Fed is now seeing 6.5% overall GDP growth in 2021, which would be the best in nearly four decades. Crude oil refinery utilization recently reached 92%, up from 67% at 2020 lows, and U.S. oil imports—another demand barometer—recently hit their highest levels in nearly two years. If President Biden manages to push a $1 trillion infrastructure plan through Congress, that’s another factor that could raise demand. It takes lots of crude to build new highways and runways. 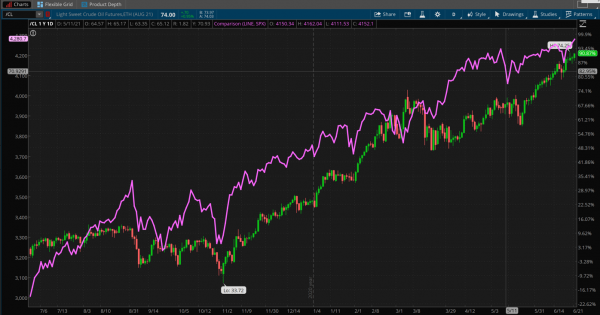 FIGURE 1: HAND IN HAND: Over the last year, crude oil futures (/CL—candlestick) and the S&P 500 Index (SPX—purple line) have accompanied each other as they’ve risen much higher, with crude trailing the SPX just slightly. Data sources: CME Group, S&P Dow Jones Indices. Chart source: The thinkorswim® platform. For illustrative purposes only. Past performance does not guarantee future results.

What could keep crude from reaching $100?

OPEC+: OPEC has kept the taps tight ever since COVID-19 hit. That might be about to change. OPEC+ is mulling over more relaxation in its oil production cut agreement beginning in August, Reuters reported. OPEC+ started relaxing its production cuts of 7.7 million barrels per day at the beginning of this year, gradually adding 2.1 million barrels per day to the global supply between May and July in response to a faster-than-expected demand recovery. “It is highly possible to increase gradually from August,” one of the Reuters sources said.High prices: “High prices cure high prices,” the old market adage goes. When prices rise, ultimately more production tends to come online or demand starts to fall. People might start buying more gas-efficient cars (though obviously this isn’t something that happens overnight). Barring that, they might decide to travel less or use more public transportation. If crude stays above $70, U.S. producers might also start to see more benefit in drilling, which can help put a cap on prices. Falling demand: The $70 level is traditionally one where transport companies start to feel squeezed, said JJ Kinahan, chief market strategist at TD Ameritrade. Drivers may also cut back, with gas at $3.50 in parts of the United States. The peak of U.S. “travel season” starts to ebb in a few weeks, too. Also, a lot of “hedging” by airlines may have taken place already at lower prices, meaning potential for less demand from big users at current levels.Technical factors: There appears to be “firm technical resistance in CME crude oil futures between $75 and $77,” Kinahan noted. That’s an area near 2018 highs, which were the most expensive since 2014. Failure to pierce that could cause bulls to back off, sending prices lower.China’s crackdown: The Chinese government recently announced a crackdown on market speculation, which could be partially aimed at reducing the high prices of commodities overall. Other commodities, including lumber and copper—which, like crude, hit multi-year highs earlier this year—fell from their highs in the weeks after that announcement, though correlation isn’t necessarily causation.Canada to the rescue? Canada’s oil sands production has been roaring back in 2021. By midyear, output had returned to pre-pandemic levels, according to industry publications. Higher prices have made expensive oil sands production more profitable, which could support more output if prices stay up. Remember what we said about high prices earlier.Iran to the rescue? Iran and the United States continue to talk about reviving a nuclear deal, which could put more of that country’s oil on the market at some point. Also in 2021, Iran’s oil minister talked about wanting to raise the country’s output to 6 million barrels per day from the current 2.5 million, according to media reports. China is the main buyer of Iranian crude, but more crude on the market, wherever it originates, tends to reduce price pressure.Greenback spike: The Fed made noises last month about reducing its bond buying. The $120 billion-a-month program aims to keep U.S. borrowing costs low by pressuring bond yields. The dollar index, which measures the dollar against a basket of other currencies, recently jumped to two-month highs as the Fed started sounding more hawkish. Traditionally, a stronger dollar pressures crude and other commodities, which are priced in dollars on the world market. When the U.S. dollar is strong, fewer dollars are needed to buy a barrel of oil.

Crude may or may not get to triple digits in the near future. And even if it does, it’s not a given the economy will be any worse for the wear.

For every argument pointing to concern, there’s a counterargument saying that either crude prices will stabilize or even fall—or, if prices remain high, the economy will take them in stride, at least in the short term.