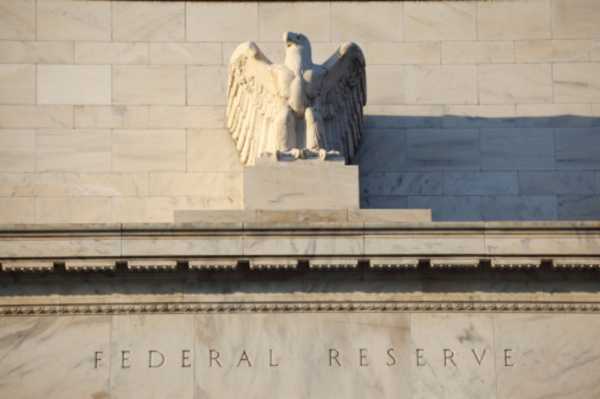 Maintenance Work: Holding Flatline Could Be Seen As Victory Today After Record Week

Disney shares on the rise after strong earnings performance

Consumer confidence data is due later this morning

(Friday Market Open) After a week of making new highs, the market might be entering “maintenance” mode going into the weekend.

Optimism around trade has waned a little, so holding close to the flat line today might be a victory. With stocks at these levels, no one should get too worked up if they don’t continue to rocket every day. It’s actually kind of healthy if they don’t. The idea is just to not get banged up.

Let’s put things into perspective: The latest trade headlines aren’t as positive, and the S&P 500 (SPX) is down just three points in pre-market trading. That reflects real strength. Another overlooked story this week that plays into the optimism theory is gold being down 4%. Interest rates are up and people don’t seem to be as worried about the economy, so those two things are working against gold.

The pullback in stocks toward the end of the day Thursday and into Friday morning came after Reuters reported that there’s “fierce resistance” in the White House to rolling back tariffs on China. Then a top trade adviser told the media that  only President Trump could decide to remove tariffs and there’s no agreement to at this time.

The chance of getting tariffs removed, as media reports discussed earlier Thursday before that negative Reuters headline, is much more optimistic than anything we’ve heard in quite a while. Giving up tariffs—instead of just freezing them as some people thought might happen—would be more positive because it possibly means commerce could actually pick up. If you freeze tariffs but don’t get rid of them, they’re still in the way.

Despite some of the enthusiasm we saw earlier this week, it’s still too early to get optimistic about the trade war training wheels coming off the market. Nothing is for certain until signatures are on paper. The S&P 500 Index (SPX) might have extended its run above 3000, but until something solid comes out on a deal between the U.S. and China, it might be prudent to be very careful about assuming everything is great. It’s not an easy road to get to a trade deal, as the last two years have shown.

For once, the action is in bonds.

Higher yields became the big story as the week rolled on and Treasuries got slammed. That was definitely the case Thursday when the 10-year Treasury yield easily sliced through the 1.9% level where many analysts had seen resistance and pushed all the way to an intraday high of 1.96% before easing a bit. The next psychological and technical resistance level is probably right around 2%, a point the 10-year yield hasn’t touched in more than three months.

The rate picture sure has done an about-face quickly. Just a few weeks ago, a lot of headlines were talking about the chances of a recession, and the yield fell below 1.6%. Now the SPX has zoomed straight up for a lot of October and the beginning of November on trade hopes, and yields are on a roll.

Financials might owe some of their solid performance this week to the yield picture. The days of an inverted curve possibly hurting bank profits seem like a long time ago. The 10-year yield now enjoys a 25-basis point lead over the two-year yield, the highest level since early this year.

At the same time, pressure on Utilities, Real Estate, and some other so-called “bond proxy” sectors is mounting. These sectors tend to get hurt when Treasury yields rise, because some investors might think they can get close to the same yield from fixed income investments as they would from dividends.

With stocks making new record highs almost every day, yields on the move, and economic data still looking decent, how’s the consumer feeling? We’ll get a sense of that later this morning with the University of Michigan’s preliminary sentiment report for November. Headline consensus is 95, according to Briefing.com, down slightly from 95.5 in October. Last month’s report showed consumers feeling good about income and jobs growth but nervous about tariffs and Washington politics.

Yesterday we talked about how some analysts are getting worried about where stocks go from here because of earnings expectations sliding for next quarter. At the same time, it’s important to remember that a large number of companies raised their outlooks this earnings season, so it’s uncertain if everyone is fully factoring that in.

Another concern is the current SPX valuation being above 20 on a trailing price-to earnings (P/E)  basis. Levels above 20 sometimes make people nervous, and this quick rally has really turned some heads. The forward price-to-earnings is still near 18, however, not too far above historic averages.

That forward P/E level could be an important number to watch over coming weeks as analysts continue to work on earnings estimates for Q4 and 2020. If it starts climbing, maybe there’s cause for concern about valuation. If it stays about where it is, it might indicate that those improved company outlooks are getting factored in.

It’s all going to be interesting to watch as we count down toward the end of the year and move through the heart of retail earnings starting next week.

Next week also gives investors a look at the latest inflation and retail sales data. Remember that retail sales declined in September, so any repeat of that in October might raise eyebrows going into holiday shopping season.

Speaking of earnings, Disney (DIS) reported late yesterday and beat third-party consensus on top- and bottom-lines. Shares got an immediate lift on the release, and are up about 6% in pre-market trading today, but still haven’t found their way back to 2019 highs above $145.

Theme parks and studios (which enjoyed strong revenue from movies like “The Lion King” and “Toy Story 4”) deserve some attention, but streaming service Disney+, which launches next week, has the most investor interest right now (see more below). One outstanding question is likely to be early subscriber numbers and how Disney+ performs against the competition with its lower prices. DIS CEO Bob Iger told CNBC yesterday that the platform is “ready to go,” and that it will be distributed on Amazon’s (AMZN) Fire TV.

While DIS shares were the stars of the show late Thursday, stocks across the board moved higher in the regular session as cheerful trade tidings pushed out most of the other news. That late Reuters headline that might have weighed on Treasury yields also could have been one reason the SPX came off its highs in the last half hour of the day, but Financials, Information Technology, Energy and other cyclical sectors remained relatively strong.

Activision Blizzard (ATVI) also had nice results last night but its shares fell in the pre-market, and Gap (GPS), pardon the expression, “gapped” lower by 10% in pre-market trading after announcing the departure of its president and CEO and releasing an outlook that didn’t meet analysts’ estimates. 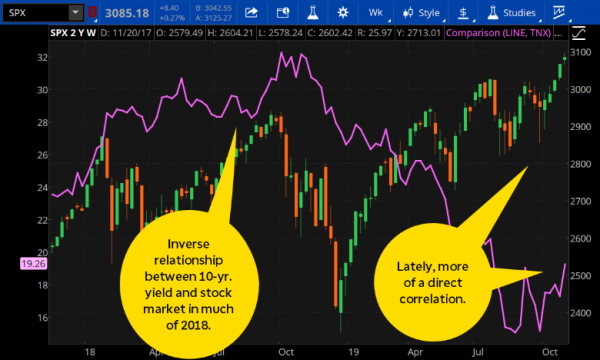 CHART OF THE DAY:  INVERSE REVERSE? INVERSE REVERSE? When the 10-year note yield (TNX – purple line) pushed past 3% a year ago, stocks, including the S&P 500 Index (SPX – candlestick) sold off amid growing concern about inflation and corporate margin pressure. But after yields fell throughout 2019—a year that has brought three Fed rate cuts—the two have started to move mostly in lockstep, including Wednesday, when the SPX made a new high even as the yield on the 10-year rose nearly 12 basis points. Data sources: Cboe Global Markets, S&P Dow Jones Indices. Chart source: The thinkorswim® platform from TD Ameritrade. For illustrative purposes only. Past performance does not guarantee future results.

Neither a Borrower…The 10-year yield posted a new three-month high yesterday, but It’s kind of hard to believe that 10-year Treasury yields below 2% and 30-year mortgage rates under 4% might trigger worries about higher borrowing costs. Some older readers might remember the early 1980s when interest rates climbed into the double-digits, and shake their heads. Still, the recent upward move in the 10-year yield from lows earlier this year of below 1.5% appeared to trigger some concerns that any kind of growth from here might put companies and borrowers into a more cautious mode. After all, they’ve both gotten used to short-duration borrowing costs well below 2%, and that’s arguably been one of the things—along with a robust jobs market—helping fuel consumer health.

Also, a lot of companies are highly-leveraged because they’ve taken advantage of low borrowing costs. It’s way too early at today’s yield levels to start worrying about over-leveraged companies and customers, but if that yield climbs much above 2% then concerns might mount. Remember, though, the 10-year yield was above 3% just a year ago, and the Fed has pretty much put the kibosh on any near-term rate hikes. The successful Treasury auctions this week might also help ease minds about the rate situation.

The Brighter Side of a Negative Note: Feeling depressed? It’s hard to blame you if you read that analyst note from Morgan Stanley (MS) earlier this week predicting bleak stock and bond returns over the next decade for anyone holding a traditional portfolio balanced 60-40 in equities and fixed income.

While not to discount the MS research, it’s important to put things in context. First, both analysts and lay-people have never had much luck predicting how stocks will perform over such a long time period. A lot could happen between now and 2029. Also, if you’re a young investor starting out, you’re likely devoting a higher percentage of your investments to stocks than the 60% in the MS model. That “60-40” portfolio is often thought of as more appropriate for someone who’s middle-aged, though no single allocation model fits every investor. A differently-weighted portfolio might have different results, even if MS is right about that particular ratio. If you think MS is right and you do have a 60-40 portfolio, maybe there’s a case to consider some dividend stocks that can potentially help bolster your account even if the overall market doesn’t do too well.

Mice, Movies and Multi-channel Marketing: The House of Mouse reported earnings late Thursday, but the real excitement is arguably around prep for next week’s rollout of its Disney+ streaming service. A lot of digital ink has been spilled on the so-called streaming wars between DIS, Netflix (NFLX) and Apple (AAPL) among others, but here’s one thing to keep in mind. At $6.99 per month, Disney+ is starting out at a bargain price compared to, say NFLX’s flagship HD plan at $12.99.  And that doesn’t even take into account company promotions and tie-ins, such as a deal with Verizon (VZ) that will let VZ customers stream Disney+ free for the first year.

But Disney’s greatest edge in the streaming wars might be the sheer breadth of its consumer touchpoints. From its movie catalog and broadcast lineup to its network of family-friendly resorts and theme parks, DIS content is the focal point—like that big white golf ball at EPCOT. Unlike NFLX or, arguably, AAPL, which might be limited to one-and-done with each piece of original content, DIS tends to double- and even triple-dip its original stuff. Today’s streaming princess movie may become tomorrow’s top-rated thrill ride, broadcast TV show, or sold-out Broadway musical. So perhaps Disney+ can afford to be a loss leader, at least in the short term.