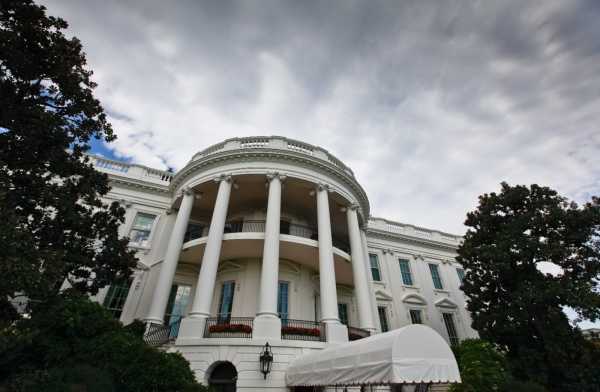 Tariffs This Morning, Mouse Ears Tonight: Trade Hopes Give Lift Ahead of Disney

Disney reports after the close with the focus on streaming

(Thursday Market Open) We start the day with positive tariff news, and then go to Disneyland after the close.

After a couple days of treading water, the market feels a little less stodgy Thursday thanks in part to news reports that the U.S. and China have agreed to lift tariffs in phases and are having “constructive” conversations about resolving core issues. The second part of this might be just as important as the first, because it’s core issues like intellectual property and Chinese treatment of U.S. companies there that helped lead to this trade war in the first place.

With earnings season slowly fading, tariffs move back to center stage. Any good or bad news around the situation might be amplified in trading, especially as we approach the lower-volume period near the holidays.

However, earnings aren’t over yet. After the close today, investors hear the latest from Disney (DIS). That company is on the cusp of launching its streaming service Disney+ next week, and there’s a lot of focus on what executives might say about 2020. The stock’s performance slightly trails the S&P 500 Index (SPX) so far this year.

The things to keep in mind about Disney+ are first that it’s cheap—only $6.99 a month—and second that it’s aimed at kids and families. The company forecasted back in April that the service will have between 60 million and 90 million subscribers by the end of 2024, so let’s see if it sticks with that guidance amid all the competition out there. Get the mouse ears ready.

Pulling back to look at the broader market, the upward move continues to look impressive. At this point, it doesn’t seem like there’s much technical resistance in the SPX until around 3120, which is a long way from where we are.

If watching paint dry is your idea of a spectator sport, Wednesday was your kind of day on Wall Street. It almost felt like Thanksgiving had arrived three weeks early.

It’s not completely fair to say nothing moved at all Wednesday, even if the S&P 500 (SPX) and Dow Jones Industrial Average ($DJI) barely did. The Nasdaq (COMP) displayed some weakness, and the Russell 2000 (RUT) small-cap index actually fell more than 0.5%. Still, the RUT is on a roll lately, recently carving above 1600 for the first time since May. Some veteran traders look to RUT as a barometer for the health of the market.

Analysts trying to explain why the COMP took a dip yesterday pointed to reports that a meeting between Presidents Trump and Xi might get pushed back to December. Let’s cry foul on this one being a major market mover, however. There’s really never been a hard-set date for that, so it sounds more like an excuse for selling rather than a solid reason.

Let’s face it: All three major indices recently touched record highs thanks in part to the Fed, better-than-expected earnings, and trade hopes. It might just be that there’s not a great catalyst here to take things much higher, especially when you consider earnings forecasts are falling for next quarter (see more below).

A bunch of sectors actually rose Wednesday, but defensive ones like Real Estate and Utilities led the way. That’s a change of pace from the cyclical rally we saw late last week, and may be a sign of investors deciding to take some profits, move to the sidelines, and wait for what’s next. Energy took a particularly hard hit yesterday as U.S. crude inventories climbed. The overall technical picture remains pretty good, however, with research firm CFRA saying Wednesday that the SPX has a bullish bias as long as it stays above 3028.

Looking for positive takeaways? Consider Wednesday’s very solid 10-year note auction. It was the second auction of three this week (the 30-year auction is today), and so far two out of the three look firm. That speaks to continued demand for U.S. debt even at current yields of around 1.8%, implying that companies and investors (and the government) are likely to continue enjoying relatively low rates. If demand had been light, it might have implied less investor certainty in the U.S. economy, but that didn’t happen.

In an interesting twist, bonds popped right back up on Wednesday after falling Tuesday. That sent yields a little lower, but they stayed above 1.8% for the 10-year. You’d think this might hurt Financial stocks, and  some were lower Wednesday, but not across the board. Most of the key bank stocks remained pretty solid Tuesday when yields went higher.

What did the headlines blame for rates’ slight drop Wednesday? Trade jitters. Not surprising to see.

Yields popped back early Thursday with the 10-year back at around 1.88%. The 1.9% area is one it’s had trouble getting through, but if it does, it could conceivably start a move toward 2% for the first time in three months.

Two closely-watched Technology firms reported after the close yesterday, and the takeaway was decidedly mixed.

First, streaming company Roku (ROKU) saw its shares fell 16% in the minutes after reporting. That’s despite a narrower loss and better revenue than analysts had expected. It looks like the disappointment had to do with management reducing its outlook for profitability. Shares of ROKU have been on a phenomenal ride this year, especially when you consider that the 16% drop late yesterday only took them back to where they’d been about a month ago. They’re still up way more than 300% year-to-date, and it could just be hard to keep that momentum going..

In other earnings news, Qualcomm (QCOM) beat analyst expectations on earnings late Wednesday, sending shares higher by 5%. This is another Technology stock that’s been on a roll lately and for most of the year. QCOM said it’s well-positioned for 5G acceleration in 2020.

There was also a little M&A (merger and acquisition) talk Wednesday as The Wall Street Journal reported that Xerox (XRX) is reportedly considering a cash-and-stock bid for HP (HPQ). As someone in the media noted, HP is where Apple (AAPL) founder Steve Jobs got his start, working as an intern there at the tender age of 12. 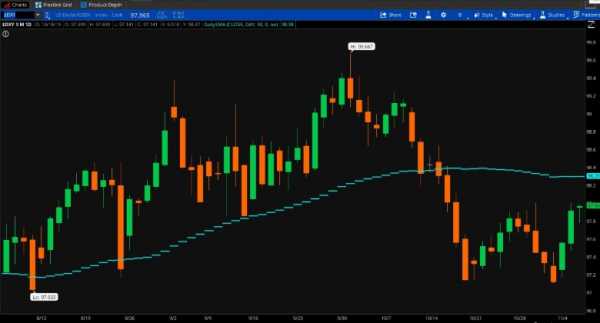 CHART OF THE DAY: RESILIENT GREENBACK. After recently taking a sharp descent to three-month lows, the dollar index ($DXY-candlestick) appears to have found some support, though it remains below its 50-day moving average (blue line). Solid ISM non-manufacturing data this week and trade hopes appear to be giving the dollar a lift, but that’s not such good news for multinationals who could continue facing the same dollar headwind they’ve weathered most of the year. Data Source: ICE. Chart source: The thinkorswim® platform from TD Ameritrade. For illustrative purposes only. Past performance does not guarantee future results.

On the Margin: It hasn’t been an unbelievable earnings season, with third-party consensus for earnings now projecting a 1.8% drop in Q3  vs. the initial consensus estimate for a slide of 4%. However, it’s been way above expectations at the outset of earnings season, and that’s partly fueling recent strength in stocks. At this point, people are surveying the slow market action over the last couple of days and wondering if there’s more firepower to move the major indices higher. One impediment to that could be growing concern about the Q4 earnings season.

The worry, according to a report in Bloomberg this week, is that earnings have exceeded analysts’ estimates by a smaller amount than average this time around even though revenue is beating estimates—a possible sign that margins might be getting squeezed. That could be why some analysts have cut their Q4 earnings forecasts. The average Q4 S&P 500 earnings forecast fell by 2.8% over the month of October, Bloomberg reported, and S&P Global Market Intelligence now sees Q4 earnings falling 0.4% year-over-year. If earnings forecasts keep getting chopped, that could be a tough headwind over the coming weeks. The opposite argument, however, has advocates, too. Namely, that many companies reporting Q3 earnings have raised their outlooks. How will all this play out? That’s why the market opens every day.

Private Wags? Not always, but often, talk of taking a company private can help the stock. That was the case not too long ago when JW Nordstrom (JWN) shares rallied on that kind of chatter (it’s still public). However, shares of Walgreens Boots Alliance (WBA) didn’t really get much of a lift this week when privatization came up, and shares actually fell nearly 3% Wednesday. Why? Well, it sounds like the analyst community isn’t too wild about the idea. It seemed like nearly every analyst note about the potential move questioned WBA’s ability to do it. They might have a point. It would be the biggest privatization of all time, would take lots of financing, and would be a complex deal. A lot of analysts say people just don’t have the appetite for it. One problem they cited is that private equity at the moment is very attracted to startups and not so much to re-organizing a long-established business.

A Market “Who Dunnit?” Arguably, some of the worst news you can hear as an investor is that the company you have a major position in is under government investigation for possible financial irregularities. A lot of times, it’s hard for an average investor—or even an experienced one—to tell if a company isn’t being on the up and up before headlines flash. For one thing, it doesn’t happen often, and the vast majority of S&P 500 companies are good corporate citizens. Still, a couple of things might be worth considering, especially if you like to take big positions in a single stock (which can be risky in and of itself).

Keep in mind the law of big numbers, which says if something is growing extremely quickly, it becomes tougher and tougher to match as time goes by. If a company’s overall revenue or revenue for a certain product is bursting at the seams for a few quarters, that’s not necessarily a sign of anything wrong. It probably means they’re doing a great job. But if revenue keeps growing at the same or better pace year after year with no signs of slowing down, that could mean you need to do a deeper dive into the numbers and figure out how it’s being accomplished. An upheaval in the ranks might be something to check, too. A company that cycles through several chief financial officers in a short time might be telling you something.