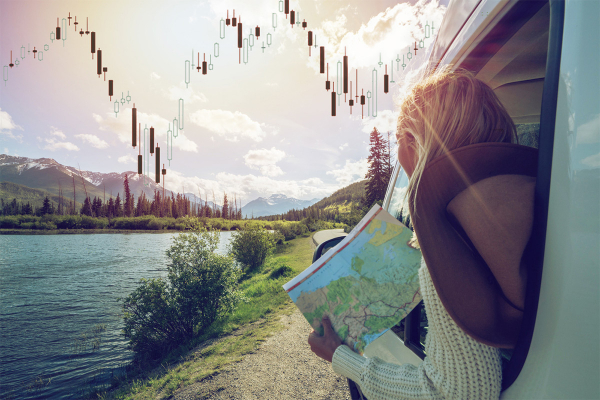 Market Insight: Your Guide to Navigating the Month Ahead

The early days of May brought some positive momentum to the markets, sparked in part by strong earnings reports and job numbers along with interest rates holding steady. But this doesn’t mean investors should throw caution to the wind. It’s too early to tell if the volatility of recent months might be behind us.

Higher oil prices and a higher yield on the 10-year Treasury could potentially stall any upward movement. Both have broken through their psychological thresholds of $70 per barrel and 3%, respectively, in recent days. If they remain elevated, it could fuel inflation fears, and these fears tend to make investors nervous.

Here are a few data and events to watch for in June.

The Fed: Sticking to Its Strategy

The May Federal Reserve meeting came and went without much fanfare, possibly because, as expected, interest rates remained unchanged and Chairman Jerome Powell didn’t hold a press conference afterwards. His previous comments in late February and March seemed to make people skittish, which led to a sell-off. However, investors shouldn’t read too much into his silence. There are eight Fed meetings a year and press conferences are typically only held at four of them.

The upcoming Fed meeting on June 12-13 may be the one to watch. Many analysts are anticipating the second of three rate hikes at that time. How the market responds to this potential announcement may depend in part on the Fed’s statement that goes along with it. The comments could provide insights into future rate increases and the strength of the economy. As of mid-May, talk of a fourth hike declined as inflation hovered around the Fed’s 2% target. If this trend continues in June, it may help keep the hawks at bay.

Many analysts had expected this earnings season to be one of the strongest in years, and for the most part, companies delivered. However, the market’s reaction to the positive news left many people scratching their heads—instead of being rewarded for their performance, many companies saw their stock prices drop. This response may have been driven in part by investors focusing more on the guidance from CEOs than the actual numbers. Less optimistic forecasts seemed to cancel out any uptick, as was the case for Caterpillar (CAT). The stock experienced an initial boost after reporting higher-than-expected earnings then dropped more than 6% based on remarks from company executives. Rightly or wrongly, many investors had interpreted their comments to mean CAT had peaked in Q1.

Another reason for the lackluster response might be that earnings growth was already baked into the market. There wasn’t much upward momentum for the financial sector despite the big banks – JP Morgan (JPM), Citigroup (C), Wells Fargo (WFC), and Morgan Stanley (MS) – all exceeding analysts’ expectations. Some bright spots were Apple (AAPL), McDonald’s (MCD), and Amazon (AMZN). All three jumped higher based on a combination of strong earnings and a positive outlook for the remainder of the year, which could bode well for the consumer discretionary and tech sectors.

The next earnings season kicks off in July, at which point investors and analysts may get a clearer picture as to whether companies can keep up the growth seen in Q1, or if certain sectors may be poised for a slow down.

Despite a somewhat rocky road, information technology is still the best performing sector in 2018, up more than 10% as of early May. This momentum is most likely due in part to Apple’s (AAPL) strong showing, as noted above. Investors interested in the tech sector may want to watch for news coming out of the Augmented World Expo (May 30 – June 1), the Apple Worldwide Developer Conference (June 4-8), and the Electronic Entertainment Expo, also known as E3 (June 12-14). These events are typically used by tech companies to introduce their latest products and innovations. For example, at its Google I/O Developer Conference, Alphabet (GOOGL) announced it was planning to use artificial intelligence (AI) to enhance its news app and photo services, among other things.

As of May 14, other top performing sectors were consumer discretionary, thanks in part to Amazon (AMZN), and energy, which got a boost from increased oil prices.

Even though they didn’t get a lift from earnings, financials may be starting to pick up steam. Some companies in this sector are taking steps to transform their business models in order to stay relevant and competitive. For example, Goldman Sachs (GS) has expanded its cryptocurrencies. Another thing to watch is whether the recent investment in Citigroup (C) by ValueAct, an activist investor, causes other institutional investors to follow suit.

Keep in mind sector performance ebbs and flows based on the industry, market conditions, and economic climate. Before trimming or increasing exposure, investors may want to consider how a particular sector fits with their overall investment strategy.

Back in the Spotlight: Geopolitical Issues

Through mid-May, the Cboe Volatility Index (VIX) readings were under 15, which seemed to indicate investors were feeling pretty good about the market and economy, and weren’t trading on emotion. The focus was on earnings during this time and not the geopolitical issues that caused the market gyrations in February and March. Unfortunately, just as earnings season was winding down, these issues started to heat up again. Investors may want to watch three in particular: the U.S. exit from the Iran nuclear deal, the upcoming summit between the U.S. and North Korea, and the ongoing tariff debate. How these events unfold may impact certain sectors such as energy, industrials, and consumer discretionary stocks. They could also potentially lead to increased volatility in both U.S. and global markets if emotions come back into play. Investors may also want to keep an eye on bond prices. A surge in bond prices may indicate a flight to perceived safety over increased concerns about these geopolitical events.

Join us at one of our upcoming investor education events. (Additional locations announced monthly.)

It‘s hard to believe, but we’re almost half-way through 2018. If you haven’t already, now may be a good time to review your portfolio. From market volatility to significant life events, a lot can happen in six months that could affect your investment strategy.

TD Ameritrade offers a host of resources to help you assess your portfolio and the potential impact of market activities, including: