What if you could predict the future? This zero-lag indicator relies on price action alone. ThinkorSwim version of Wolfe Wave available here exclusively.

I recently purchased the wolfe wave and it works perfect! Thank 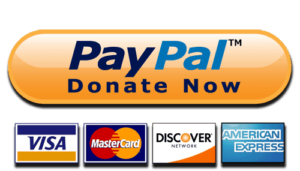 This is a zero-lag indicator that relies on price-action alone. It automatically identifies and draws the Wolfe Wave pattern in real time.

The Wolfe Wave is a price pattern that was first identified by Bill Wolfe and later popularized by market wizard Linda Raschke.

Linda briefly describes the pattern in an interview she did for Opening Bell Monthly. After reading her interview, I recommend reading the free ebook, “Seeing the Future,” that was put out by the originator himself.

This indicator will work on any chart time frame and with any instrument (stocks, futures, currency pairs, etc.) A few more examples are shown below.

The indicator includes a user-setting that allows for the wavelength to be adjusted. The larger the number, the longer the identified waves will be. Below is a screenshot demonstrating the difference between a wavelength of 5 and one of 13. The same stock and time frame is used for both. 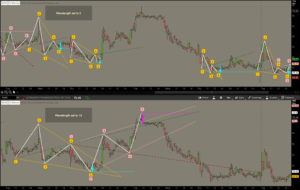 The Wolfe Wave indicator for ThinkorSwim is exclusive to my Fun with ThinkScript blog.

Just wanted to let you know your Wolfe Wave indicator just about paid for itself yesterday in just its first day of use.
One trade. $425 of capital used. $125 winner.
Excellent !
-Jordan

Curious if you could briefly describe the difference in Harmonic Patterns study vs Wolfe Wave. Seems Wolf is extremely similar in concept.

All five patterns (4 harmonics and 1 Wolfe) are reversal patterns that try to identify potential reversals. However, the criteria for each is different. True, they are all composed of 5 distinct legs, but, again, the setups are different.

The numbering is really irrelevant. One chose to label the points with numerals while the others use letters. No matter, they all have to start somewhere. The harmonics start with X and the Wolfe starts at 1.

For a bullish reversal, all the patterns start with an upward move followed by a pull-back (decline). It is from this point that the patterns differ.

The bullish Gartley, for instance, begins at point X, then rises to point A, then declines to point B. The rules for the Gartley specify that point B must be a 61.8% reversal.

The bullish Wolfe wave, on the other hand, begins at point 1, then rises to point 2, then declines to point 3. The rules for the Wolfe wave specify that point 3 must be lower than point 1 was. So, the Wolfe wave, initially, begins with a >100% reversal.

The remaining points of each pattern have specific criteria that must be met as well. The bottom line is that while all five patterns contain 5 legs, they each have different rules governing their formation.