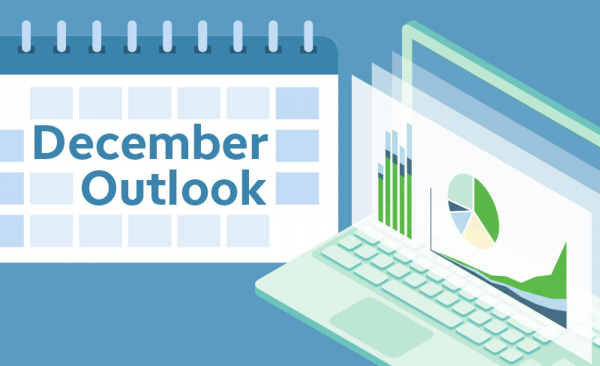 Retailers’ Q3 Earnings Announcements Has Investors Gearing Up for Santa

Inflation Could Be the Coal in Every Stocking

The fourth quarter of 2021 is shaping up well with the S&P 500 (SPX) rising about 10% from October 1 to its November high. While stocks had a severe drop on Black Friday, they started bouncing back the following Monday helping the fourth quarter to live up to its reputation as being a strong time of the year for equities. However, the rise of the omicron variant of the COVID-19 virus is a new risk that could stymy fourth quarter growth.

While many investors are now looking to see if Santa will come, others are reflecting on the gifts from the recent earnings season. While rising interest rates, supply chain issues, inflation, and worker shortages continue to be issues for many companies, earnings calls revealed that many found ways to cope. However, some of these issues appear to be sticking, which means they could be a drag on Santa’s sleigh.

Every December the Santa Claus rally phenomenon seems to be discussed at nauseum. However, there is good reason for this. Although past performance isn’t a guarantee of future performance, it’s a pretty reliable cycle according to the Stock Trader’s Almanac. The cycle occurs during the last five days of trading in December through the first two days of trading in January the following year. During that time frame, stocks have seen positive returns 76% of the time and averaged a 1.3% return since 1950.

If Santa doesn’t deliver, it could be a bad sign for the market. In 2000, the market declined 4% during the days attributed to the Santa rally, foreshadowing the dot-com bubble. In 2008, there was a loss of 2.5%, which was followed by the second-worst bear market of all time.

There are a couple of theories for what causes the Santa Claus rally, although there’s no generally accepted explanation for it. What may be the most likely cause is that portfolio managers are trying to get their portfolios set for the next year. This theory leads to another market phenomenon known as the January Effect. This is a time when small-cap stocks tend to outperform the market from January through February.

The theory goes that money managers look for small-cap stocks because of their potential for growth. The right small-cap investments could help a portfolio outperform its benchmark. This means that investors may want to keep an eye on small-cap stocks to see if they exhibit greater relative strength during the Santa rally and may have potential for growth through the first quarter of the next year and possibly beyond.

The third-quarter earnings season is close to being done at this point, and the retailers are trying to wrap it up on strong note. Earnings started off with many companies singing from the same dull carols about rising costs from inflation, supply chain issues, and worker shortages. Through most of October, the major indices pulled back about 5%. However, November changed as many retailers found they were able to successfully pass on higher costs to consumers.

Positive earnings announcements from retailers resulted in the Dow Jones U.S. Retail Index ($DJUSRT) rallying more than 14.5% from its October low to its October high. Of course, these results reflect a reaction to third-quarter earnings as well as guidance for earnings going forward.

So, how is the fourth quarter going? We can’t see the sales for these companies, but the National Retail Federation (NRF) is providing some insights. As of October, the NRF is seeing that consumers are spending as much this year as they did last year. They’re focusing on gifts but resisting impulse purchases for themselves and their families. Consumers are also buying a little less online than they did last year and a little more in department stores. Despite rising inflation, consumers are spending only slightly more than they did in discount stores last year, but less than they did in 2019.

For the previous few months, we’ve watched the Producer Price Index (PPI) rise at a greater pace than the Consumer Price Index (CPI), which suggested that producers were trying hard to find ways to absorb costs instead of passing them on to consumers. The fear was that consumers may choose not to buy or may choose to buy less of their products. However, many consumer goods companies and retailers reported on their recent earnings reports that they were able to pass on higher costs to consumers with little negative effect. This development could result in more costs being passed on and inflation continuing to rise.

The U.S. October CPI reported faster-than-expected inflation at 5.8%, which caused a ripple through the yield curve and resulted in rising interest rates. The federal funds futures rate also changed by increasing the likelihood of the Fed raising rates by July 2022 and then adding another rate hike in December 2022.

Consumers in Great Britain aren’t seeing as high of inflation as U.S. consumers. Their CPI was 3.4% in November, which was higher than the expected 3.1%. However, their Producer Price Index (PPI) came in at 13%. If producers don’t find a way to pass on the costs, it could be very bad for earnings.

On November 22, Germany reported a spike of 6% in its inflation rate. This was its biggest increase in 30 years. As Germany sees its COVID-19 cases rise and starts to implement more pandemic measures, there’s fear that locking down could cause inflation to rise more because manufacturers won’t have workers to make products to meet demand. Germany’s neighbor, Austria, has already implemented heavy restrictions.

Germans are expressing frustration with the management of the euro by European Central Bank President Christine Lagarde by calling her “Madame Inflation”. However, the eurozone reported inflation of 4.1%.

It’s hard to compare inflation numbers side by side because countries measure inflation differently. For example, Canada reported October inflation of 4.7% year over year. Nearly 17% of Canadian household budgets go to transportation costs. Canada’s strict lockdowns has likely helped keep these costs low. However, as Canada reopens, these costs are likely to be reflected in later reports.

Earnings season started strong with financial stocks reporting greater-than-expected earnings on higher interest rates. Rising oil prices helped to push rates even higher as well as oil stocks. As the quarter went on, leadership changed, and other sectors were able to rise on better-than-expected earnings. However, the important factors going forward will likely be inflation and interest rates.

If inflation continues to rise, then energy and materials will likely strengthen. In fact, a stocking full of coal may not be a bad gift in this circumstance. Rising inflation may prompt the Fed to taper faster as a way to keep inflation down, which may result in higher yields and interest rates. Financials tend to perform better when yields and rates rise. However, rising interest rates tend to be a drag for growth stocks like technology as well as income stocks like utilities and REITs. If inflation subsides and rates fall, then look for technology to rise and financials to fall further behind.

Rising interest rates could also help the dollar continue to strengthen. A stronger dollar ($DXY) has been hard on gold futures (/GC) and appears to be causing some drag on cryptocurrency futures like bitcoin (/BTC). A stronger dollar also tends to help small-cap stocks, which could help the Santa Claus Rally/January Effect phenomena previously discussed.

If or when President Biden’s Social Safety Net and Climate bill, a.k.a the social infrastructure bill, passes the Senate and is signed into law, there are some groups that stand to benefit. When the bill passed the House, U.S. steelmakers rallied on the news including Nucor (NUE), Steel Dynamics (STLD), U.S. Steel (X), and Cleveland Cliffs (CLF). This is because steel will be needed for these green infrastructure projects. In fact, looking for companies that could rally on infrastructure news can be helpful in identifying market participants that could benefit.

Other industry groups may have more direct involvement. For example, part of President Biden’s plan is to build out infrastructure for electric vehicles and that means charging stations. EVgo (EVGO), ChargePoint (CHPT), and Blink Charging (BLNK) have tended to rally on green initiatives, which suggests that some investors may see them as potential beneficiaries of these spending bills.

There’s also debate on whether or not the social infrastructure deal will add to the inflation problems. According to The New York Times, many Americans fear that more spending will increase inflation, but analysis of the bill is mixed depending on which political think tank you listen to. Many studies have found that government debt hasn’t always correlated with inflation but pushing more money into a system to chase after low supplies of goods and services could cause problems. Yet, most government projects take years to get off the ground, so the effects of the spending bill may not be felt for some time. By then, the raw material harvesting, supply chains, and production facilities could be caught up and ready to absorb the influx of dollars.

Another political risk under the social infrastructure plan is capital gains taxes. President Biden and Treasury Secretary Janet Yellen have touted that the bill pays for itself if the tax strategies work. However, this could still add potential for volatility if capital gains taxes change. If capital gains tax goes up, then investors may decide it’s better for them to take profits before the end of the year and lock in the current tax rate.

Additional volatility could come from tax-loss harvesting. This is the time when many investors choose to sell their losers to recognize the loss for tax purposes, and then, if they so choose, they can buy the stocks back 30 days later. The losses have the potential to offset some capital gains taxes, up to $3,000, and potentially reduce a person’s tax burden. Of course, TD Ameritrade does not provide tax advice, but if you think this is a strategy you’d like to consider learning more about, talk to your tax advisor to determine if tax-loss harvesting would work for you and your portfolio.

Tax-loss harvesting is actually another theory on why the Santa Claus rally occurs. Many investors take the holiday off and aren’t selling stocks for tax purposes. No matter what the cause of the Santa Claus rally is, December tends to be a positive time for stocks; however, there are real risks that could keep Santa home.