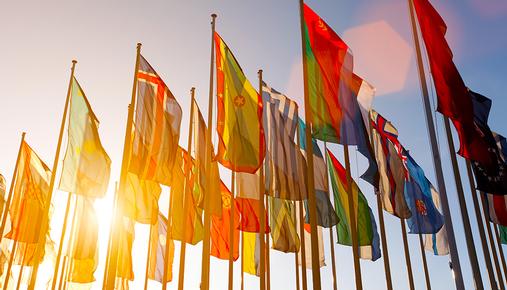 Forex trading involves leverage, which means you can control a large investment with a relatively small amount of money

Around the globe, and virtually around the clock. That’s one way to describe the foreign exchange (“forex”) market.

It’s the exchange of one nation’s currency for that of another. More than $5 trillion of currency changes hands every day and, since exchange rates are based upon nations’ interest rates, economics, and geopolitical conditions, rates are always fluctuating. It’s a dynamic, global market.

If you’re interested in learning how to trade forex, read on for a few things to know. But be forewarned: forex trading is subject to unique risks. And not all accounts will qualify. If you’re a beginner interested in forex trading, you may wish to begin with a primer on the dynamics of currencies and the marketplaces where currencies trade. Later on, we’ll show you how to practice trading forex without risking a dime.

In general, retail clients have two choices in terms of trading currencies:

The futures market. A futures contract is an agreement to buy or sell a predetermined amount of a commodity or financial instrument at a certain price on a stipulated date. Such contracts are traded on exchanges, and volume is typically limited to the major currencies (more on that below).The forex market. Most foreign exchange trading takes place among institutional players—banks, dealers, and large intermediaries—in what’s known as the interbank market. Retail forex brokers use this information to post competitive bids and offers (called the bid/ask spread), against which retail traders may sell or buy currencies in specific increments.

When trading forex, you’re not just trading one product; you’re trading two currencies against each other. The ratio of the two is what’s known as a currency pair. The quote for a forex currency pair references what it costs to convert one currency into the other. For example, suppose the U.S dollar versus the Canadian dollar (USD/CAD) is trading at 1.33. That means $1 USD is equal to $1.33 CAD. And if you want to know how much it would cost you to buy a Canadian dollar, you invert it: $1/1.33 = $0.7519. So in this example, it costs a little over 75 cents to buy a Canadian dollar.

In other words, with currency pairs, it’s all relative. Here are a few more nuggets regarding forex quotes.

Pips. A pip is the minimum price fluctuation in a currency pair. In the forex market, pips are typically taken out to several decimal places. For most pairs the pip is 0.0001, except for pairs that involve the Japanese Yen (JPY). For JPY pairs, the pip is 0.01. So, for example, you might see a quote in the British pound versus the U.S. dollar (GBP/USD) of 1.4278. This means a pound costs one dollar and 42.78 cents (yes; it’s a fraction of a penny). 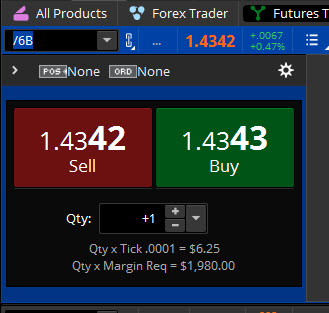 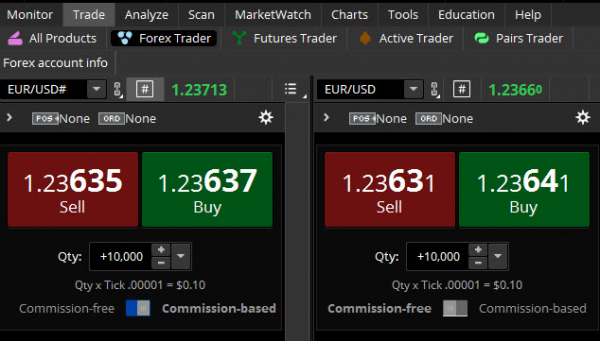 Majors and exotics. Any pair consisting of these 11 actively traded currencies is known as a major: U.S. dollar (USD); Japanese yen (JPY); euro (EUR); Australian dollar (AUD); Canadian dollar (CAD); British pound (GBP); Swiss franc (CHF), Danish krone (DKK); New Zealand dollar (NZD); Norwegian krone (NOK); and Swedish krona (SEK). All others are known as “exotics.”Forex spreads. On retail forex brokerages, trade costs are typically paid through the bid/ask spread, although some platforms, including the thinkorswim platform from TD Ameritrade, offer the choice between a commission-based market or a commission-free market. Also, bid/ask spreads are not guaranteed. Although bid/ask spreads are not guaranteed, the commission-based market typically has a tighter bid/ask spread than the commission-free market. In addition, major pairs typically have tight spreads throughout the day and night, but exotics generally have less liquidity and wider spreads. It’s important to understand liquidity risks before trading forex.

A Note on Leverage

Forex trading involves leverage, which means you can control a large investment with a relatively small amount of money. When you buy or sell retail forex or foreign exchange futures, you don’t put up the entire notional value, but rather you post an initial margin requirement—essentially a “good faith” deposit. In forex, margin requirements vary as a percentage of notional. Margin requirements are typically between 3-5% of the notional value, however certain pairs can be as low as 2%. Leverage is a double-edged sword, as it can magnify both your profits and your losses. A small amount of market movement can have a large effect—positive or negative—on the account’s P/L. Adam Hickerson, Manager, Futures and Forex, TD Ameritrade, suggests,” If you’re a beginner who’s starting out in the forex market, it’s important to define your risk tolerance before you enter into a position. The leverage in the forex market can magnify profits and losses, but if you have a plan in place and define your risk tolerance, you can better manage the risks associated with leverage.”

Before carrying a forex position from one day to the next, it’s essential you learn the ins and outs of forex financing rates.

Does trading forex sound exhilarating? Daunting? A bit of both? Start with simulated forex trading on the paperMoney platform on thinkorswim. This will allow you to practice, test strategies, and learn the dynamics of this asset class without risking a dollar, pound, yen, or euro. 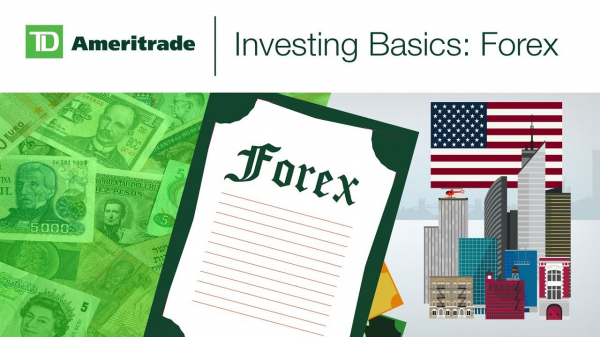