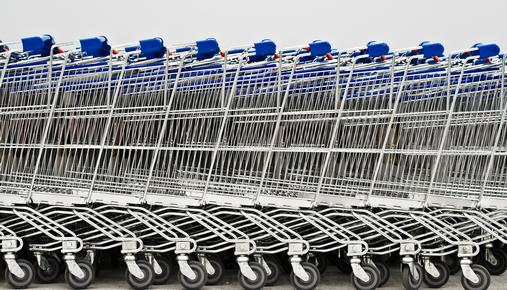 There’s a lot to watch when Walmart (WMT) reports Q3 earnings Tuesday during this latest outbreak of sickness across the country.

When COVID-19 first wreaked havoc on much of the world early this year, WMT was there to help as an essential retailer, dispensing everything from coveted toilet paper rolls to wine and spirits.

And its first-half 2020 earnings bore that out. In-store and online sales rallied as WMT was one of the few big-box retailers ready with a robust online presence and the people power to handle the onslaught of lock down-related sales.

Most analysts expect continued strength for Q3, but some wonder whether WMT’s results will be off the charts like they were in Q1 and Q2. Online sales in Q2 jumped 97%, and net income surged a jaw-dropping 80% to $6.48 billion. It might be tough to see a repeat performance quite like that when WMT reports early Tuesday. Guidance for Q4 could play a big role in how investors treat WMT shares following the earnings report.

How’s that Walmart+ Working Out?

WMT rolled out a number of initiatives in the first half that might have gained traction—or not—by Q3. They include ship-from-store capabilities, personal shoppers, expanded pickup slots, and Express Delivery, all introduced in a very short period of time.

Analysts said they want to know whether consumers are embracing these initiatives, but they’re most anxious to hear about the long-anticipated launch of Walmart+, WMT’s venture to take on Amazon’s (AMZN) Prime in a marketing game the e-commerce behemoth created in 2005.

After months of teasing that the service was in development, WMT finally rolled it out in mid- September. That probably isn’t enough time to put it in the win or a loss column, but early days could be telling as far as consumer acceptance.

Like Amazon Prime, Walmart+ is a paid membership service that promises same-day delivery of more than 160,000 items that can be found in stores and on its website. For $98 a year, WMT offers its delivery, plus other perks that include discounted fuel and a Scan & Go app allowing customers to scan items in-store and pay with a pre-loaded debit or credit card.

At $98 a year, it’s cheaper than AMZN’s $119 annual fee, but doesn’t have the product line depth of AMZN. Also, it doesn’t offer a streaming service such as Prime Video, Prime Music, or Prime Gaming.

How are Walmart+ membership numbers tracking? Did they meet early expectations? What are future expectations?Are same-day deliveries running smoothly? Are consumers satisfied?Is the Scan & Go app gaining traction? Are there any glitches with the technology?What about logistics for store replenishment? Are there new levels of demand?Are there signs that consumers are hoarding again as a new wave of COVID-19 cases flood in? Will there be issues with inventory again?Are there plans in place to add more items to Walmart+?What about a streaming service that seems to be so popular with Amazon Prime members? Any plans for a similar package? 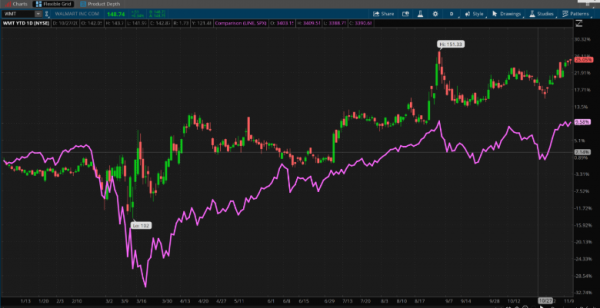 NOT EVEN CLOSE. Shares of Walmart (WMT—candlestick) are up sharply so far this year, easily outperforming the S&P 500 Index (SPX—purple line) as the big retailer succeeded in attracting customers with its flexible shopping options during the pandemic. Data sources: NYSE, S&P Dow Jones Indices. Chart source: The thinkorswim® platform from TD Ameritrade. For illustrative purposes only. Past performance does not guarantee future results.

What About the Holiday Season?

Forecasts for the holiday shopping season are all over the board, with some analysts projecting consumer spending will top the charts. They base those thoughts on the likelihood of fewer holiday parties, less travel, and a lack of over-sized family gatherings that cost big bucks. That could leave more cash around for plain old shopping (although high unemployment and recession worries could dampen some of that).

Unemployment has fallen from its April peak of 14.7%, according to the Bureau of Labor Statistics. Yet it still registered a prickly 6.9% in October, nearly double the percentage it stood a in February ahead of the pandemic.

We haven’t seen 6.9% since November 2013, and the outlook is still murky as COVID-19 cases add up and cities and states reinstate restrictions to stem the tide.

The National Retail Federation expects consumers will spend around $998 per person this year on holiday shopping, $50 less than last year, partly because they’re likely to focus on gifts for others rather than spending on themselves like in years past.

WMT has been pushing Black Friday sales since before Halloween, so analysts said they’re looking forward to hearing what might actually be happening in these still-early days of the most important shopping period of the year. What happens at WMT sometimes offers insight into the entire retail industry, given the 4,700-store footprint and large online presence. Remember, WMT’s e-commerce sales catapulted 97% in Q2.

Is it true consumers are only gifting this year? What are they buying? Are there new trends emerging that might be COVID-only crazes? Are jobless numbers having a notable impact? And what if a stimulus package gets checks to consumers ahead of the holidays? These are all questions analysts hope WMT can help answer.

WMT released a duo of technology-related announcements recently that caught some investors’ attention. Last week it said it was doing away with in-store robots that tracked stock positions because it found human beings were actually better at checking inventory and cleaning up the place than the roving robots.

But technology is still king at WMT. It’s merging technology and brick-and-mortar in four test stores to use the physical sites for real-time experimentation that could help speed customer service, whether it’s in-store, online, or at the curbside.

“This year has ushered in a new era of retail, and customers are asking for retailers to show up differently,” John Crecelius, senior vice president of WMT’s U.S. stores, said in a blog post. “We’re moving quickly to use our physical retail stores to not only serve in-store shoppers, but to flex to meet the needs of online shoppers, too.”

Analysts said they want to know more about what drove those decisions and hear what else WMT might have on its plate.

And What’s the International Plan?

Investors might also be interested in WMT’s international plans. Last month, WMT finally was able to unload its majority ownership in U.K.-based Asda for $8.8 billion, some $2 billion less than it bought it for in 1999. The bet then was to disrupt the U.K. grocery market and double its international operations. Aldi and Lidl apparently were too tough to beat. WMT, however, is hanging on to a minority position and a board seat to keep a hand in the Asda business.

Now WMT looks to India for international growth. It sold its stores to Flipkart, the e-commerce startup it controls, to consolidate operations in the world’s second-largest country.

“Walmart and Flipkart will achieve more together than each of us could accomplish separately to contribute to the economic growth of India, creating a strong local business powered by Walmart,” Judith McKenna, WMT International chief executive, said then.

Whatever Happened to that TikTok deal?

After all the hoopla about the Trump administration’s plan to ban TikTok and the jockeying for position potential buyers were taking, there’s still no conclusion. The Commerce Department said this week it will abide by a court-ordered temporary injunction to keep the social-media site up and running.

But that doesn’t address the long-term issue: Is WMT still working with Oracle (ORCL) to purchase a 20% stake in TikTok parent ByteDance? As noted, the Commerce Department missive doesn’t speak to the whole outlawing issue. And is there any word from the Chinese government, which had not given the greenlight on the deal? Will this ever happen?

There’s little argument that this year has brought its challenges. WMT’s outlook in a still uncertain pandemic-tied environment might offer some insight into what’s ahead of the industry overall. Stay tuned.

When WMT releases results, it is expected to report adjusted EPS of $1.18 vs. $1.16 in the prior-year quarter, on revenue of $132.2 billion, according to third-party consensus analyst estimates. Revenue is expected to rise 3.3% year-over-year.

Options traders have priced in about a 3.9% stock move in either direction around the upcoming earnings release, according to the Market Maker Move indicator on the thinkorswim® platform from TD Ameritrade. Looking at the Nov. 20 options expiration, puts activity has been higher at the 130 and 140 strikes, with calls active at the 150 and 160 strikes. Implied volatility was at the 23rd percentile as of Monday morning.