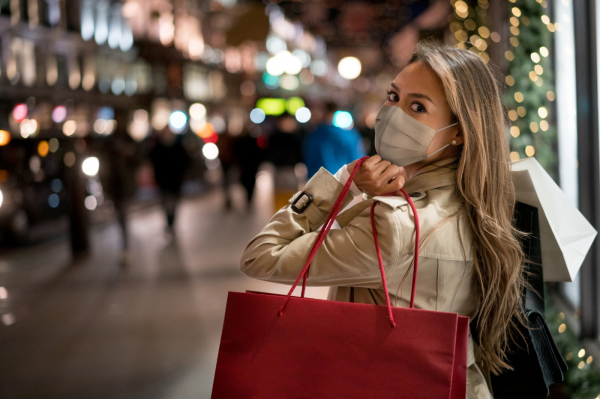 In retail, there’ll be winners and losers

Now that Q3 is over, eyes turn to the holiday shopping season

For retailers, the fallout from the COVID-19 contagion that continues to wreak havoc on the nation is still a work in progress, and the Q3 results for the nation’s largest legacy retailers could write another chapter.

Unfortunately for some, it may be Chapter 11.

This could be another muddled episode of shifting consumer shopping and spending habits that could mark a happy ending for only a handful of protagonists.

What might give Q3 2020 a new twist: early Black Friday deals—which some retailers launched in October this year. Why? The reason is threefold:

Spread out the traffic to help keep shoppers at a safe social distance Get holiday spending top of mind for consumers in what’s been a less-than-pleasant year for most consumersCompete with the big kahuna of e-commerce—yes, Amazon (AMZN)—and its Prime Day (see figure 1).

Some analysts expect some Q4 sales may have been pulled into Q3, which may have juiced earnings.

It’s important to remember, too, that Q3 conference calls are normally ladled with questions about the onset of the holiday shopping season—typically the most important period for retailers—so analysts will likely be on high alert for clues to what might be ahead.

Here’s a quick peek at what might be in store for retailers in Q3 after some reported monster results in Q2 with high double-digit profits. 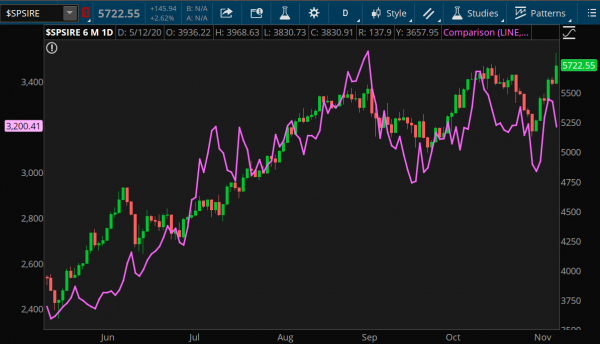 FIGURE 1: REGISTERS RINGING? Although both the S&P 500 Retail Select Industry Index ($SPSIRE—candlestick) and shares of e-commerce leader Amazon (AMZN—purple line) have had a hefty rebound from lows earlier in the year, retail looks headed for a strong finish. Data sources: S&P Dow Jones Indices, Nasdaq. Chart source: The thinkorswim® platform from TD Ameritrade. For illustrative purposes only. Past performance does not guarantee future results.

By the time many of the big retailers start reporting, much of the earnings season has already been reported. According to FactSet, as of November 9, 89% of S&P 500 companies have already reported earnings—with 86% of those turning in earnings per share (EPS) that outpaced Wall Street’s expectations.

Of those retailers that have already reported and fall into the S&P’s Consumer Discretionary sector, 88% are on the same track. Investors best not be feeling too cocky about those early results, however; beating analysts’ projections isn’t the same as reporting earnings growth.

For 2020, the growth bar has been set pretty low across the board. FactSet is looking at an overall 7.5% pullback in the quarter across the S&P 500, the third largest year-over-year decline by the index since Q3 2009, trailing only the previous two quarters.

Plus, because of so much uncertainty and the ongoing risk of COVID-19 in the air, many companies have not offered forward guidance this year and some analysts admit their numbers are mostly guesstimates, at best.

The good news is that Consumer Discretionary isn’t in line for the deepest drops—Energy, Industrials, and Health Care are expected to dwell in the cellar—but it’s on track for an 11.1% decline, according to FactSet.

We’ve already seen what quarantines and pent-up demand create—a surge of spending and more goal-oriented shopping, according to Deborah Weinswig, CEO of Coresight Research. “The consumer is there and alive and well,” she said in a recent webinar with Placer.ai.

“What is being sold is being sold at a higher margin, which is fantastic,” she said. Though consumers may be making fewer trips to stores, “they’re doing it with intent and that leads to a much more robust ecosystem,” she added.

The Beauty of ‘Essential’

It also helped that the two already had been investing millions in their e-commerce strategies in an effort to better compete against AMZN. In Q2 WMT posted a healthy 9.3% gain in same-store sales, while its e-commerce sales surged 97%. Ditto for TGT, with a 10.9% jump in comparable sales and an unprecedented 195% catapult in digital sales.

Both big-box giants acknowledged they’ve been benefitting from that essential designation—TGT boasted of its 10 million new online customers and its jaw-dropping 700% upsurge in curbside pickup—but it’s unlikely they’ll turn in the eye-popping results that AMZN did last month. According to its Q3 release October 29, AMZN’s net sales rose 37% to $96.1 billion and net income nearly tripled to $6.3 billion from $2.1 billion a year ago. Remember, though, that not all of AMZN’s growth comes from retail sales; much of it is tied to its cloud services.

Still, investors are likely going to want to see whether these positive trends with WMT and TGT continued into Q3.

The Bane of Bankruptcy

JC Penney’s (JCP) earnings are likely to have analysts glued to news about the wrap up of its Chapter 11 bankruptcy. The exit is in the final stages and the department-store retailer has been gearing up for the holiday season as if there were no knots to untie. A ride out of bankruptcy comes after Simon Property Group (SPG) and Brookfield Asset Management (BAM) agreed to buy the business—not the properties—in an effort to keep it afloat in their own malls.

Though the deal and the get-out-of-bankruptcy card is expected to be played out before the holidays—although it seems we’re already in them—some analysts said they’ll be looking for more commentary on how the “new” JCP will look and feel.

Last month, JCP said it was rolling out new national brands in its stores as the holiday shopping season began. The brands run the gamut, from Schott Zwiesel wine glasses to SensorPedic pillows and mattress pads.

In a statement, JPC’s CEO Jill Soltau said her team is “working to secure partnerships with new national brands and to expand our product offerings as part of our efforts to provide compelling merchandise and deliver an engaging shopping experience to our customers.” Analysts want to know if that was enough to drive traffic online and into stores, especially since JCP’s first round of 150 store closings was expected to be done by Oct. 23.

JCP’s second quarter results were a disaster by most analysts’ reckoning. The department-store retailer that was among those that had to rely on e-commerce sales during quarantines when it was closed and much of the following months before consumers started wandering back into shopping centers and malls logged a near-56% plunge in net sale to $1.08 billion. Earnings per share fell into the red, again, by more than 71% to a minus-$1.69 as the retailer tried to convince customers it was still open for business and still a relevant brand.

With Chapter 11 reorganization a hot topic in 2020, other brick-and-mortar retailers might be watching JCP as a test case.

The Curse of ‘Department Store’

Kohl’s (KSS) said on the Q2 conference call that it was planning “conservatively” for the rest of the year, noting the pandemic, of course, and the soft back-to-school sales results—usually a busy time for KSS.

Q2 results looked rough with revenues down 23% and net income diving 80% to $47 million from $241 million in the year-ago period. On an adjusted basis, KSS turned in a loss of $0.25 a share compared with a per-share profit of $1.55 last year. KSS was one of those that beat Wall Street’s revenue expectations but still came in lower than the year-ago period at $3.4 billion from $4.43 billion.

KSS jumped on the athleisure bandwagon last month when it announced it will roll out the FLX brand for men and women by next March. Some analysts wondered what took KSS so long and worried it may have long ago been beaten to the punch, even as the pandemic continues to drive sales away from business and business-casual wear and instead “slipping on something a little more comfortable.” Some analysts said they’ll want to know more about the new initiative and how KSS plans to compete with all the early entrants into the category.

The Blessing of DIY

We’ve talked about this in the last quarter and we may very well be talking about it again in the coming quarters: Consumers are digging deep into their pockets for home improvement projects.

For the work-from-home crowd, it’s hard to keep walking by that outdated wallpaper and countertop, and opening and closing that squeaky door, without saying “enough is enough!”.

And since it’s gotten harder and more dangerous to hang out at parties or attend mass gatherings, we might as well spend the money on fixing up the place. Or, more colloquially, if you can’t paint the town red, you may as well paint the house in a sleek gray palette.

Even those without jobs spent stimulus checks on home improvement. Two of the biggest winners in that category were Home Depot (HD) and Lowe’s (LOW). Both saw triple-digits jumps in digital sales—100% at HD and 135% at LOW—and revenue growth in high double digits.

Though both retailers said they expected the summer growing and do-it-yourself improvement periods to be strong, analysts mostly expect growth will have pulled back from those Q2 results.

What they say they’re looking forward to hearing is what HD and LOW see for Q4, a period that tends to slow down in the DIY department—no one wants to start overhauling the dining room before the holidays. Moreover, how is consumer sentiment after nearly eight months of mostly home confinement and construction and gardening projects? Are there still spikes left in those nail guns?

Investors should remember that earnings season is not only a chance to see what might have worked or didn’t in Q3 but also what could be ahead. That so-important holiday shopping season began weeks before the tricks and treats were shared on Halloween this year, and it’s likely that some retailers already know what direction it’s headed. Pay attention and stay tuned—even if you’re not an active participant in the retail industry. Retail speaks to the state of the consumer, and thus the state of the economy.