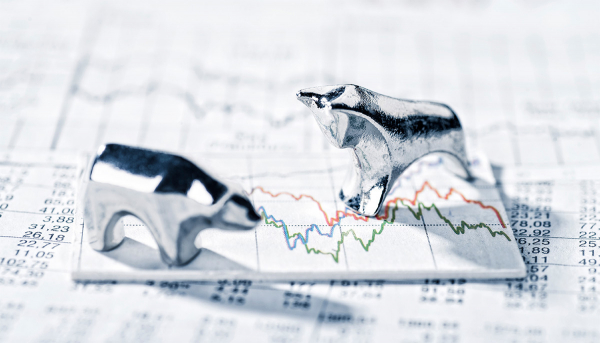 Markets look to bounce back as equity futures higher

Crude oil looking for a bounce after falling below $70

Lyft and Akamai to report after closing bell

(Tuesday Market Open) With quarterly earnings still coming in at a steady clip, along with a resurgence of Covid-related concerns (and an eye on what could be an interesting employment report to end the week), we’ve got all the makings of a choppy market. And that seems to be playing out over the first couple days of August.

Investors are looking for a Turnaround Tuesday with hope that today the market can hold on to its early gains on positive earnings reports following Monday’s declines and a failure to retain early trading momentum.

Concerns about the rate of growth for the economy and the Delta variant may have put a damper on any bullish aspirations investors harbored following a strong July. Stocks petered out on the first trading day in August as observers peeked over at the bond market and didn’t like what they saw. The S&P 500 Index (SPX) and Dow Jones Industrial Average ($DJI) closed lower and the Nasdaq Composite (COMP:GIDS) closed marginally higher. All three are trading comfortably above their 50-day moving averages.

The $DJI did hit an all-time high in early trading but wasn’t able to hang on to it. This morning we’re seeing some signs of hope as the market looks like it may give another try at hitting those highs—equity index futures are trading higher ahead of the close. Will the market be able to hold on to this morning’s bounce?

One space to watch is the semiconductors, which have been performing pretty well. If we see strength in this area, it could help fuel a rally in the Nasdaq. Let’s see if that momentum can continue.

The Cboe Volatility Index (VIX) didn’t really give up a whole lot. It flirted with 20 Monday but is off a little bit this morning. While not necessarily indicative of too much fear, it’s still something to keep an eye on during the week. The VIX had been trending up even before stocks turned south yesterday—often an indicator that something’s amiss.

The bond yield curve flattened as long-dated Treasury yields dipped among concerns that the rate of economic growth in the U.S. is poised to slow down. It bounced a little this morning but is still relatively flat. Meantime, the I word—inflation—continued to cause investors to fret. Taken as a whole—choppy stocks, a firm VIX, and a flight to Treasuries—and it looked like a “risk-off” mood to start the month. We’ll see if Tuesday’s bounce turns the risk sentiment.

One culprit for yesterday’s action may have been the Institute for Supply Management’s July manufacturing index, which unexpectedly slipped in July compared to June, reflecting a slower pace of expansion in the U.S. goods-producing sector. The ISM manufacturing index came in at 59.5 in July from 60.6 in June—well below consensus expectations of 61.0. Readings above the neutral level of 50.0 indicate expansion in a sector. Survey respondents cited issues keeping up on the supply side for the overall deceleration in activity.

Another disappointing surprise followed. Construction spending recovered at a slower than expected pace in June, according to monthly data from the Census Bureau on Monday. Spending increased 0.1% in June following a 0.2% decrease in May, which was below estimates of a 0.4% rise.

This is the second busiest earnings week of the quarter. Yesterday’s earnings reports saw mixed results and we’re likely to see more of that today.

In a hopeful foreshadowing for the commercial real estate sector, Simon Property Group (SPG) reported earnings that beat expectations. It was the second time in the past four quarters that the company’s funds from operations surpassed consensus estimates. Simon’s share price has gained almost 50% this year, compared to 17% for the SPX.

In other before-market news, Pepsi (PEP) announced that it is selling its Tropicana, Naked, and other juice brands to French private equity firm PAI Partners for about $3.3 billion. The balance-sheet weight loss is part of its plan to focus on healthier snacks and zero-calorie drinks.

Today will be another busy day on the earnings front with Lyft (LYFT), Avis (CAR), and Nikola (NKLA), among many others reporting.

You may want to watch the crude market closely this week. WTI crude futures (/CL) fell $2.56—and another dollar-and-change overnight—to fall back below the $70 mark, on low global demand and weaker than expected manufacturing activity in the U.S. and China. These are two of the largest economies of the world and a reduction in demand from both these countries could put a damper on the price of crude. Further concerns of the Delta variant as it continues to gain traction in the U.S. could have also put a dent in crude.

Looking ahead—and we don’t know if this will take days, weeks or months—the Senate spent the weekend in session hammering out details of the proposed $1 trillion infrastructure bill. Lawmakers are attempting to pass it through the chamber by the end of the week and send it to the House, though neither side of the aisle is declaring assurances of when the bill could be delivered after it arrives in the House. 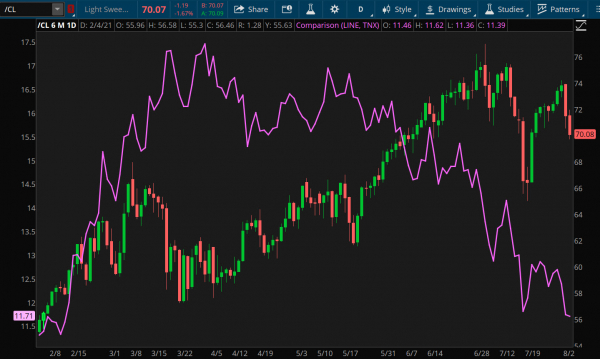 CHART OF THE DAY: GROWTH GAUGES TURNED LOWER. Crude oil and Treasury yields are considered yardsticks for economic growth. So when both go through a more than modest fall—something both have been doing on big down days—it may be time to pay attention. The 10-year Treasury yield (TNX—purple line) went as low as 1.15%, closing at 1.17% Monday, a low it hadn’t seen since February. And crude oil futures (/CL—candlestick) closed at $71.31 per barrel—a one-week low—and kept dropping overnight to fall below $70 this morning. Data source: CME Group, Cboe Global Markets. Chart source: The thinkorswim® platform. For illustrative purposes only. Past performance does not guarantee future results.

A Dizzying Double-Whammy Amid Delta’s Debut: The end of summer comes with an onslaught of events as millions of Americans, some reeling from the eviction moratorium last weekend, may now face an expiration in Covid-era enhanced unemployment benefits. Although around 3.6 million Americans are facing eviction worries in the coming months, according to a July US Census Bureau’s Household Pulse Survey, nobody really knows how many of them are collecting those enhanced benefits, yet the Labor Department noted that nine million unemployed Americans were receiving them as of mid-July. It may be something to consider when weighing the stock market against market fundamentals.

In other words, how all of this might affect market sentiment and the real economy is up in the air. It’s a big unknown. But you can ask questions to prepare. Might this add negative pressure to reflation trade stocks? Might it be time to look at defensive plays such as Consumer Staples, Utilities, and Health Care? Keep an eye on the news. The answer may come slowly or it may show up on your front doorstep faster than you can blink.

Reverse Splitsville: As we pointed out in yesterday’s report, shares of General Electric (GE) settled last week with a $12-handle but started the week above $100 per share. This wasn’t the result of any monster-size rally, but rather that of a 1-for-8 reverse stock split as of July 30. Whenever there’s a split (or reverse split) in a widely-held stock, the questions tend to start flying, but the first thing to note is that, all else equal, the company’s market cap doesn’t change in a split. In the case of GE, it’s an eight-fold reduction in the number of outstanding shares, and thus an eight-fold increase in the price per share.

If you have options positions, it’s a little more complicated, but again, the numbers will change in order to keep the underlying values in line. Existing contract months will retain the old strike prices (and the old deliverable value), but new options will be listed with the new deliverable strike price and deliverable value. Although the goal is to keep all options contracts to the standard 100 shares, and that’s typically the case in a split, you should always check to be sure. Here’s an overview of splits and other so called “corporate actions,” and how options are affected.

The bottom line is that, all else equal, when there’s a corporate action, adjustments keep the underlying values in line math-wise. Now, what might a reverse split say about a company? That’s open for interpretation.

Buy-Now-Pay-Later (BNPL): When Square (SQ) announced that it planned to acquire Afterpay (AFTPF), share prices of these two companies and others in the BNPL space surged, with many moving higher than 10%. But not so with Global Payments (GPN) which was down by over 11%. So what’s so attractive about BNPL? In a nutshell, it’s when you buy something and pay for it in customized installments, interest free. And if you miss a payment, you’re likely to get hit with fees, although maybe not as high as those charged by credit card companies.

The fact that it’s getting attraction may be indicative of people more confident in taking on more debt, but in a way that sidesteps the typically high interest rates on credit card and other revolving debt. With companies like SQ, PayPal (PYPL), and several others offering this type of service, we could see this space become competitive in the future. So far, BNPL makes up about 2% of the payments market, according to a Barron’s report. If the SQ acquisition makes the process as easy as ticking a box with your pinkie when you buy and sign, that 2% number could rise quickly.